"Zollverein" Coal Mine - The Ruhr Museum in Essen (Germany)


The "Ruhrgebiet" -  "Ruhr District"  developed as of the nineteenth century into the largest complex of heavy industry in Europe. Hard coal was extracted at several hundred mines, and steel was produced at more than 20 plants. Today there are five coal mines, and steel production is concentrated largely in Duisburg on the Rhine. The population is declining, and the area is undergoing full-scale structural transformation. 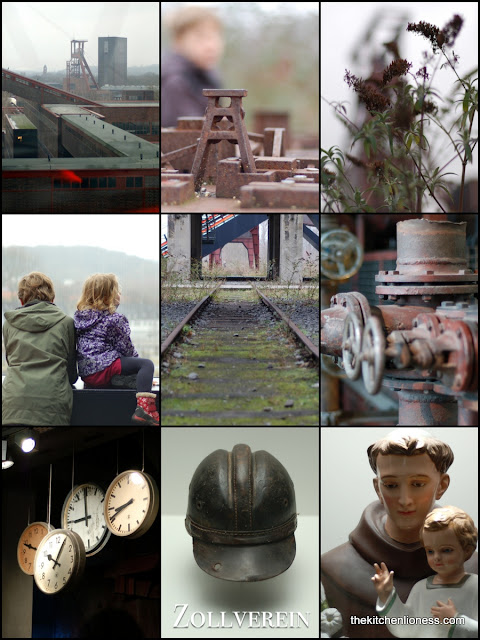 Built from 1928 to 1932, the coal mine called "Zollverein" in Essen, Germany was the world‘s most modern and high yielding hard-coal mine in the world for decades. On being closed in 1986, it was classified as a historical monument. Rebuilt as a center for art, culture, history and creative industry, it was named a UNESCO World Heritage Site in 2001. For years now this world heritage site has been a symbol of structural transformation in the Ruhr District.

The Ruhr, by German-speaking geographers and historians more accurately called the “Ruhr Area” or “Ruhr District” is an urban area in North Rhine-Westphalia, Germany. With a population of some five million, it is the largest urban agglomeration in Germany. It consists of several large, industrial cities. 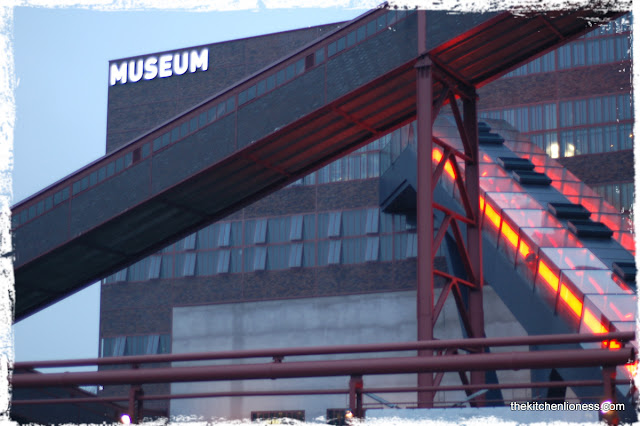 The Zollverein Coal Mine´s largest above-ground structure was used to process, store and sort coal. These functions gave rise to very different spaces: enormous halls with monstrous machinery, massive windowless concrete bunkers and long suites of rooms. Today these facilities house the Ruhr Visitor Center, a souvenir and bookshop, a delightful Café/Coffee Shop called “Kohlenwäsche” - “Coal Washing” and, of course, the Ruhr Museum.  I must say that it is an amazing feeling to be enjoying a steaming cup of coffee and a delicious slice of freshly baked cake while sitting in the midst of a the entrance hall to what used to be the world´s largest coal mine. 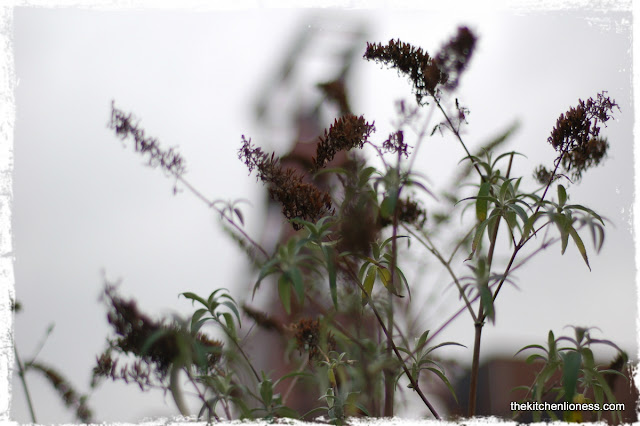 The Ruhr Museum at the Zollverein Coal Mine is not an industrial museum but a new type of regional museum. It presents the natural and cultural history of the Ruhr District, and thus serves as the region‘s historical memory. The museum displays the entire history of the Ruhr District from the formation of coal more than 300 million years ago to the region‘s structural transformation into the Ruhr metropolis today.

The three levels of the permanent exhibition are desingnated as "Present", "Memory" and "History". 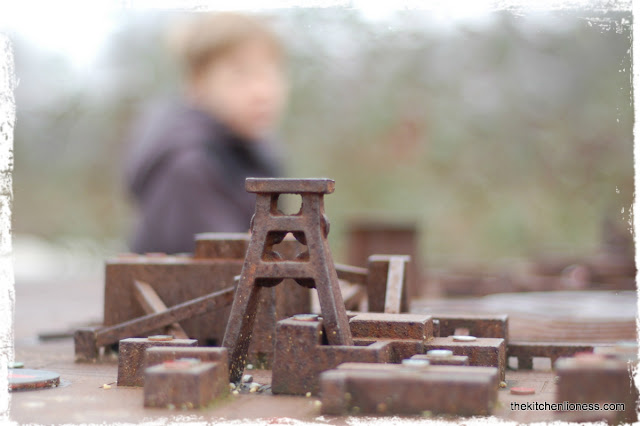 The entrance to the museum lies at the 24 meter level in the north. Visitors find a new stairway there in what used to be the rough coal bunker, which serves as an evocative entrée to the exhibition. The orange-coloured staircase connects the foyer with the three levels of the museum: the 17 meter, the 12 meter and the 6 meter levels, named for their height above ground. 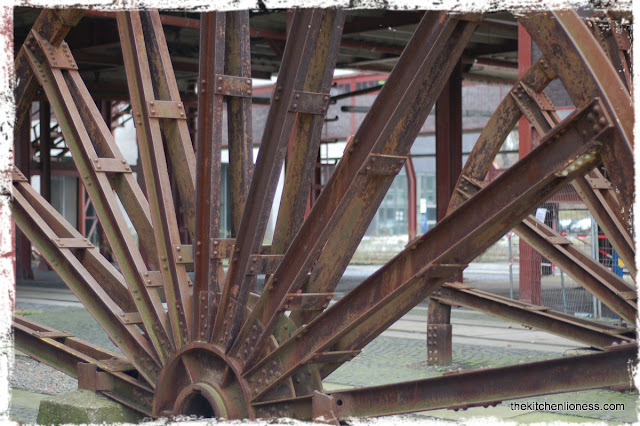 Unusually for a historical museum, the Ruhr Museum starts its route in the "Present".  The exhibition on the 17 meter level of what used to be the Coal Washing Plant, presents myths, phenomena and structures on a large industrial stage. In the area entitled „Signs of the Times“, there is a focus on experiences and memories of the people in the Ruhr District, but also on the traces left on the territory by millions of years of geological history. 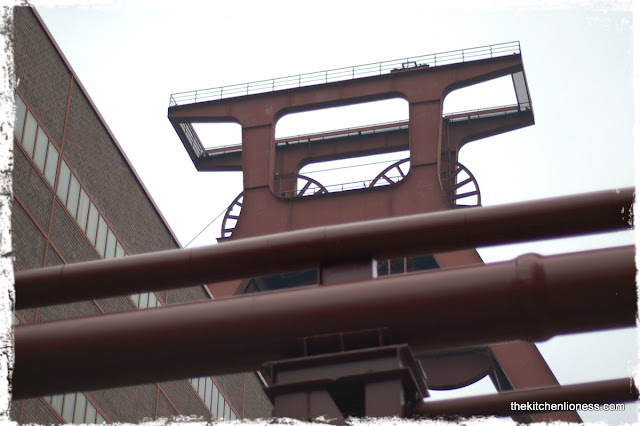 The 12 meter level is dedicated to the pre-industrial history of the Ruhr district, the "Memory". Its windowless concrete bunkers used to store debris, coal and water. Today they are a repository of cultural memory. In addition to the preindustrial traditions of the Ruhr District, this level of the museum also displays selections of the collections that have no relation to the Ruhr District: the archaeological, the natural science and the ethnological. 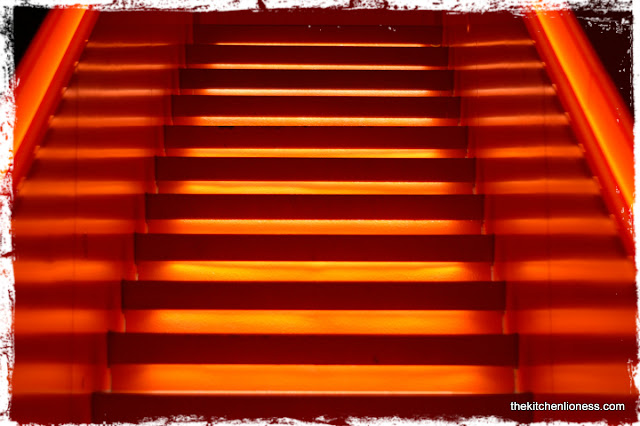 The 6 meter level entitled "History" awaits visitors with displays on the dramatic historical process of industrialization, presented in five acts along a spatial axis extending nearly one hundred meters. The history begins with the start of industrialization in the 18th century. This process transforms an agricultural landscape into the largest coal and steel region in Europe, and then into the modern commercial and service center of the Ruhr metropolis. 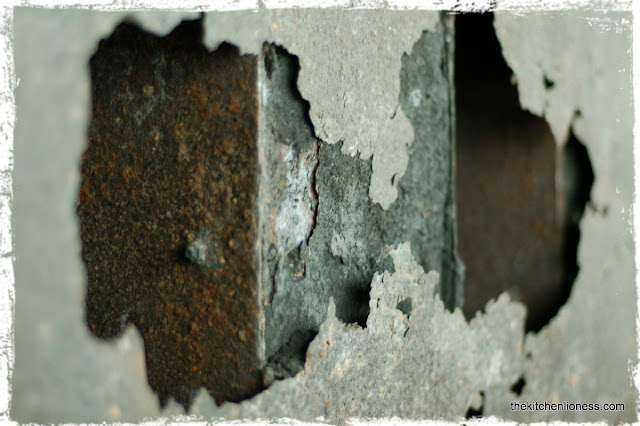 This visit was our first visit to the Ruhr Museum at the Zollverein Coal Mine and we were delighted with the way this regional museum that is now a World Heritage Site was designed. It is truly astonishing how the archtects of the Museum managed to integrate the contents and features of the Permanent Exhibit into the existing structures of this unique building! Truly worth more than one visit!

This is a picture of some of the original piping of the coal mine... 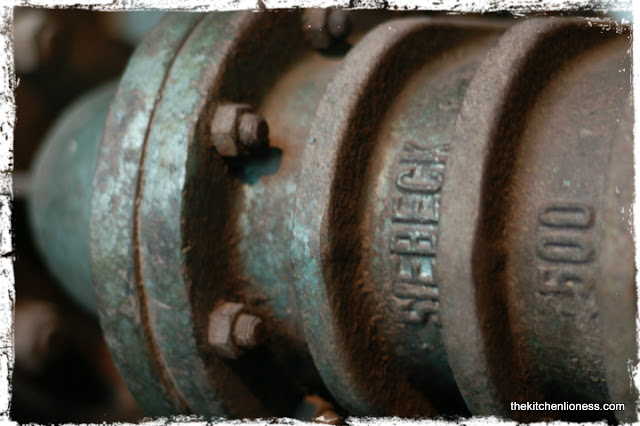 ...and a glass model of the entire building. 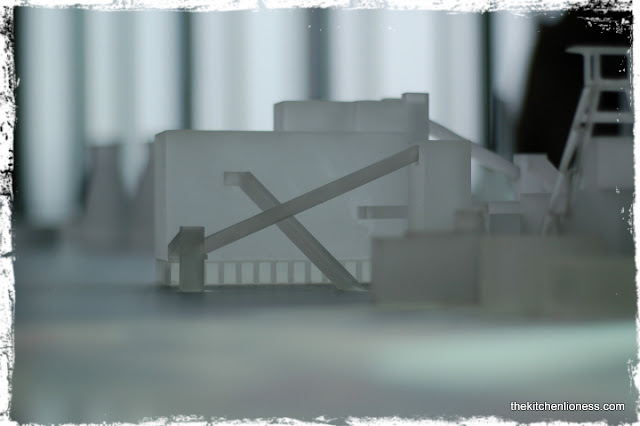 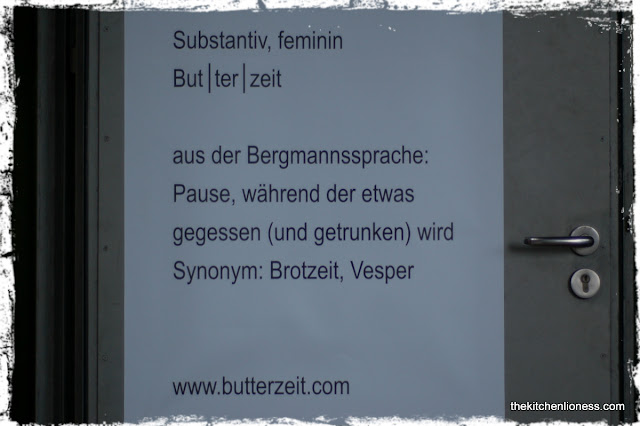 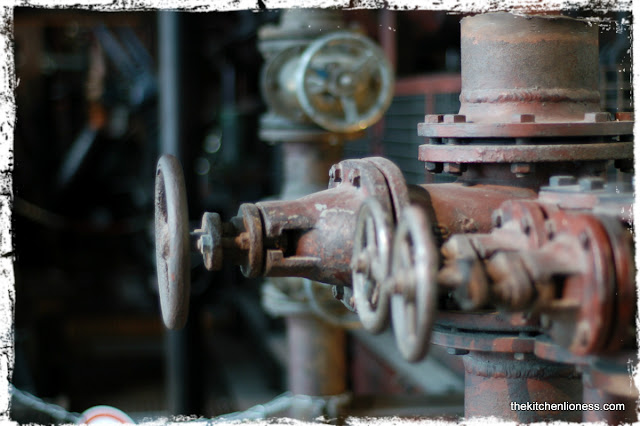 ...and an original scale with some metal measuring tape. 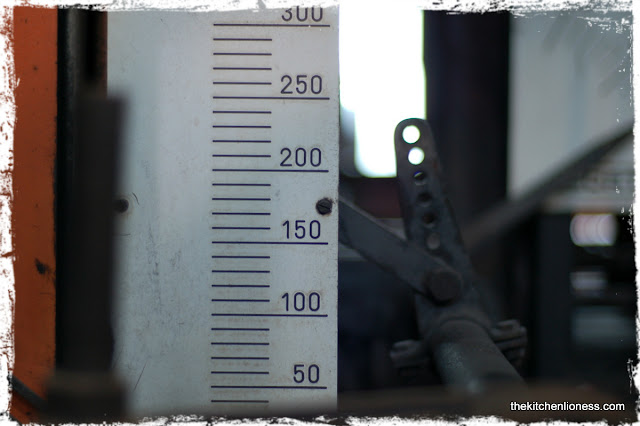 This is part of the original coal conveyor belt. 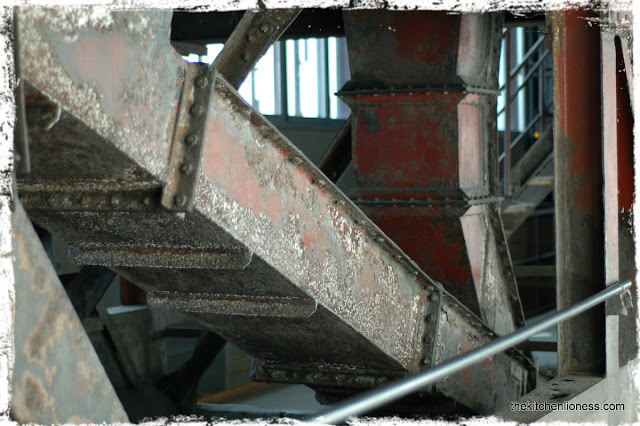 A plate on the floor of the Museum - when you step on it, you can listen to the sound of a smelting furnace (kids loved all the different "sound plates"). 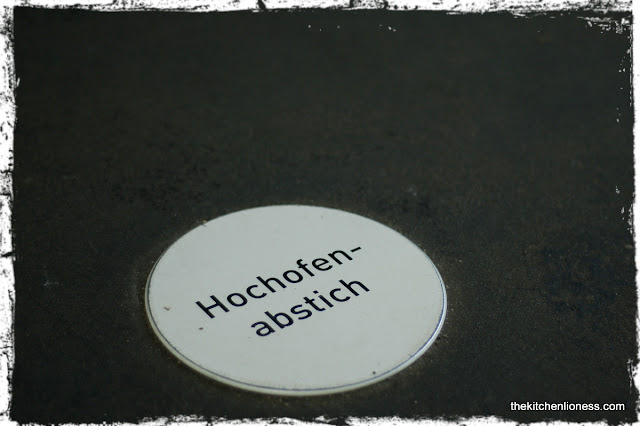 A large piece of  petrified wood... 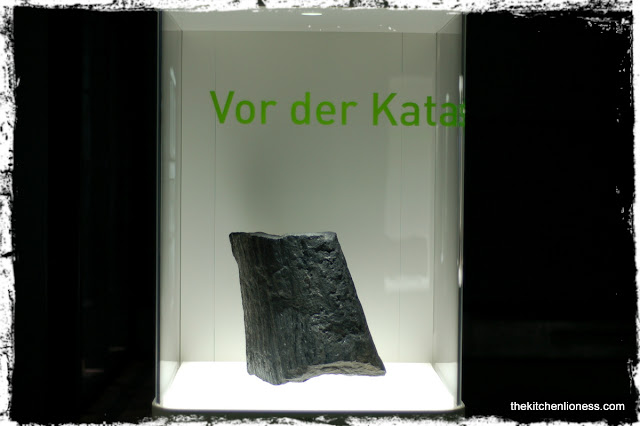 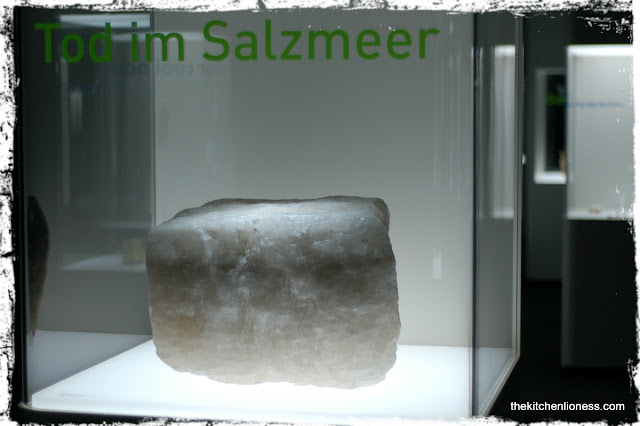 ...and a large tree grate from a copper beech. 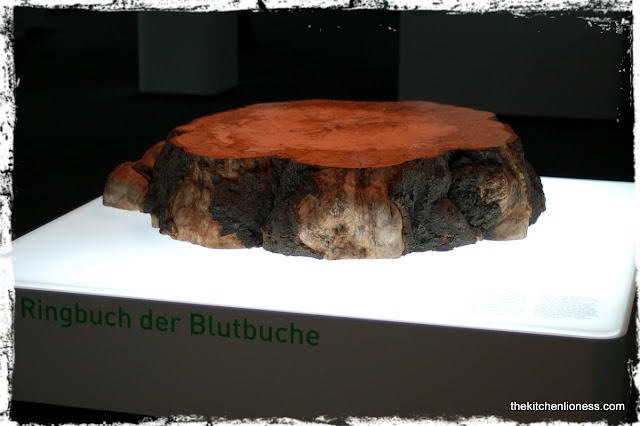 And (of course) one of my favorite exhibits, a wood-burning stove from one of the former residents of the Ruhr District. The phrase "Wenn der Ofen nicht sauber ist, ist die ganze Küche nicht sauber" - "If the stove is not clean, the kitchen is not clean either" hails from the former owner. 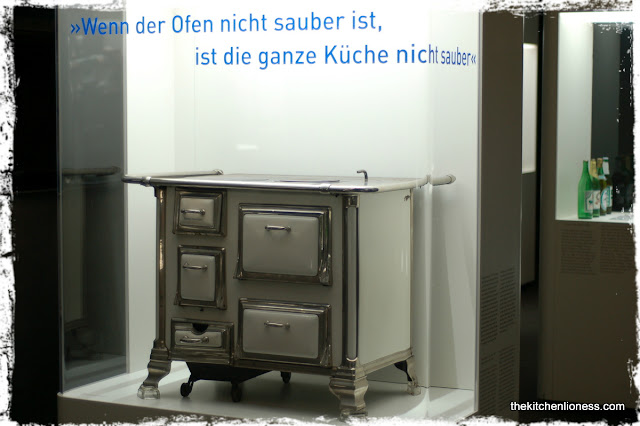 These are beautifully dried plants that grow in the vicinity of the former coal mine... 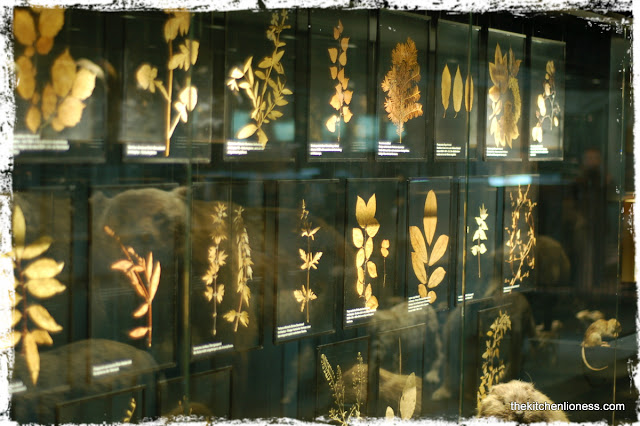 ...and impressive fossils that were found in the area... 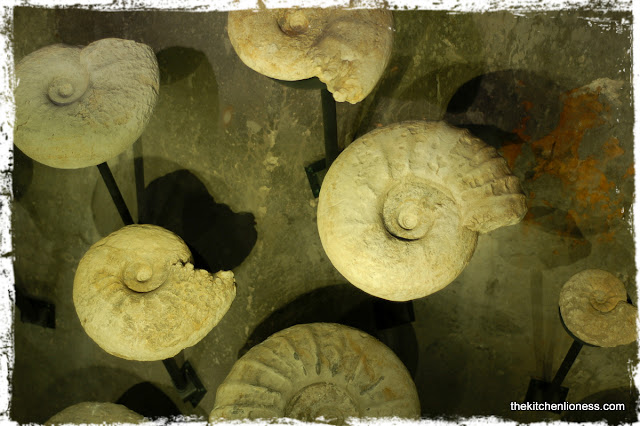 Bars of soap to wash your hands with after a hard day of work at the coal mine. 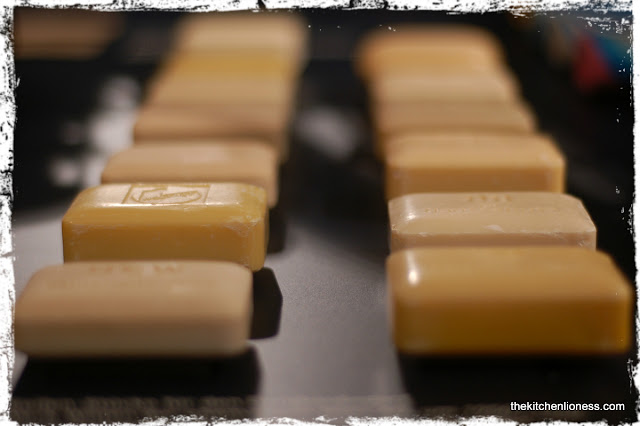 Time to go home and start planning the next visit! 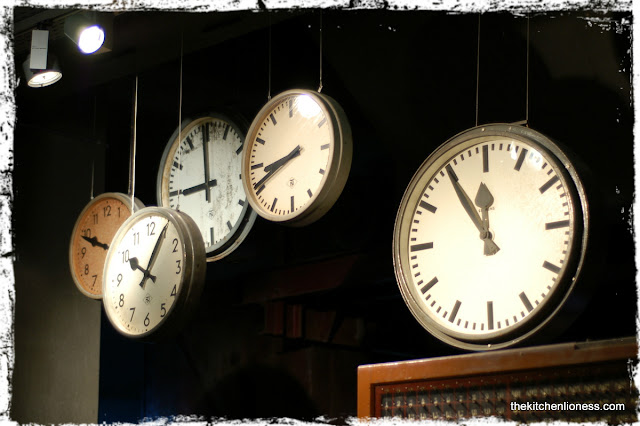