The traditional pastry that I am featuring today is called Burger Brezel (Burger Pretzel). They were  originally produced in an area around Burg Castle (Schloss Burg) in a region called Bergisches Land (North Rhine Westphalia). The Town of Burg nowadays belongs to the City of Solingen, world-renowed for the production of incredibly good kitchen tools such as the Wüsthof or Zwilling knives and scissors. 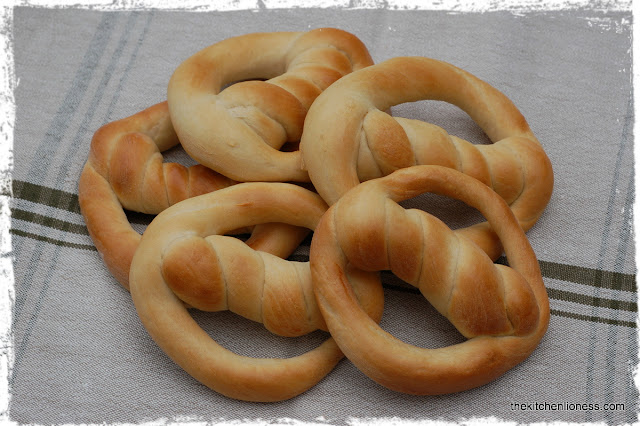 The Burger Pretzel is an artfully looped, manually produced pastry made with a lighty sweeted yeast dough. According to tradition, around the year 1795, a wounded French soldier from Burgundy stayed with the family of a baker in the Town of Burg while he recovered from his injuries. In his other life he was also a baker and it is said that he left his recipe for Pretzel with the Burg family as a way to show his gratitude for the care that he had received during his recovery. Based upon his recipe, the recipe for Burger Pretzel was developed. At first the recipe was kept a secret but a couple of years later,  almost every little town in the area had a baker who produced Burger Pretzel.

Last month, we received a copy of the traditional recipe for Burger Pretzel during  Pretzel Day at the outdoor museum. 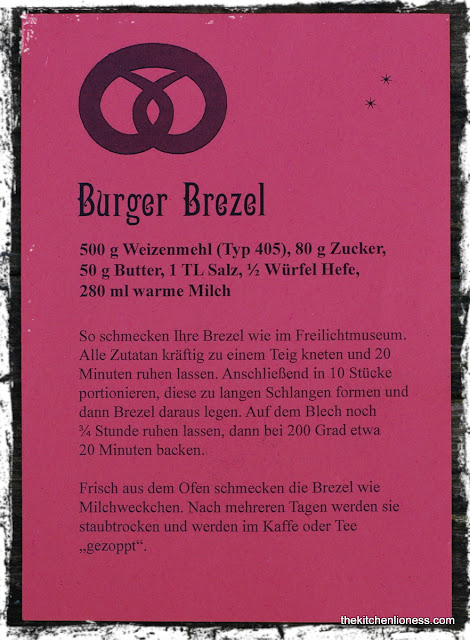 So-called Kiepenkerle (peddlers transporting their wares afoot carrying wooden back frames and panniers) sold the Burger Pretzel throughout the region and beyond. And while we were visisting the museum that day, a woman wearing the traditional gear of the Pretzel vendors distributed the Burger Pretzel. 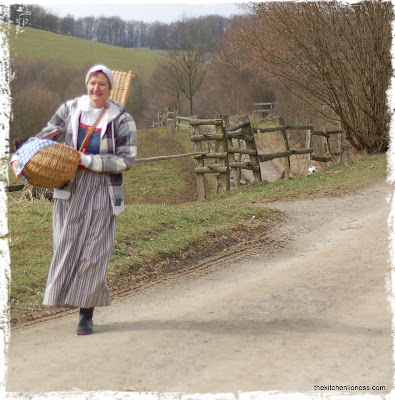 Today only a few bakeries still exist which produce the Burger Pretzel by hand and according to the traditional recipe. The traditional four-time loop of these Pretzel cannot be achieved with machines. 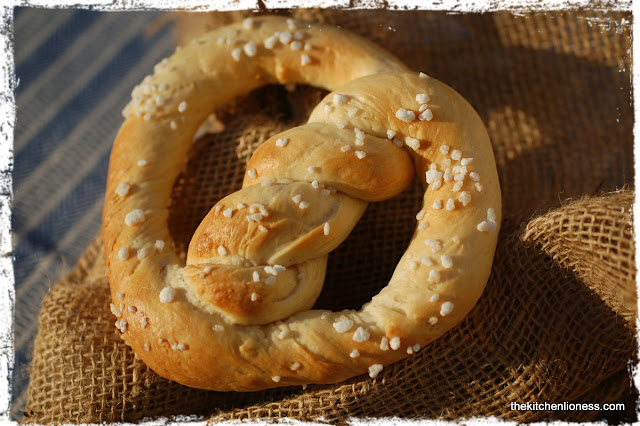 The Burger Pretzel differs from other Pretzels in its appearance. According to its size it has a minimum of four or five twists in its middle segment. In order to twirl the knot of the Pretzel (Schnackenstock), the baker throws a string of dough in the air and “spins” it by hand. Characteristically, the Burger Pretzel becomes hard and crispy within a few hours after baking. Its crust is golden brown and  it tastes a bit like rusk.

During the Pretzel Day, pictures of different forms of Pretzels were put on display. Here you can see the basic shape, the original shape as well as the Burger Pretzel shape with the traditional four-time loop, the Bavarian, and the Swabian shaped Pretzel. 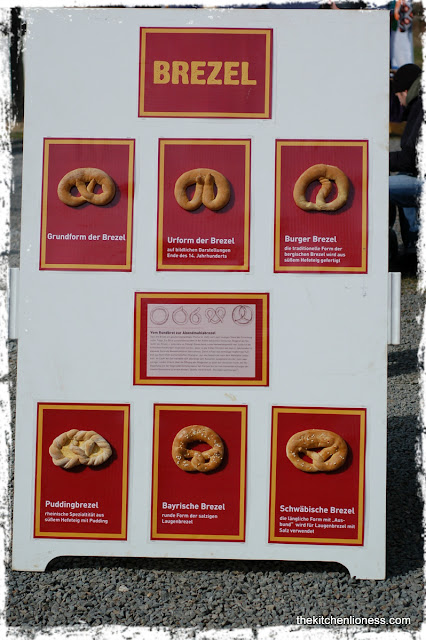 Today, the Burger Pretzel is often served as an integral part of the menue of the so-called Bergische Kaffeetafel, an afternoon meal somewhat resembling an English Afternoon Tea and still very much alive today, in homes as well as in restaurants. On special occasions, when guests are expected or family celebrations are planned, everything that the country farm in the Bergish countryside can and could provide was put on the table. 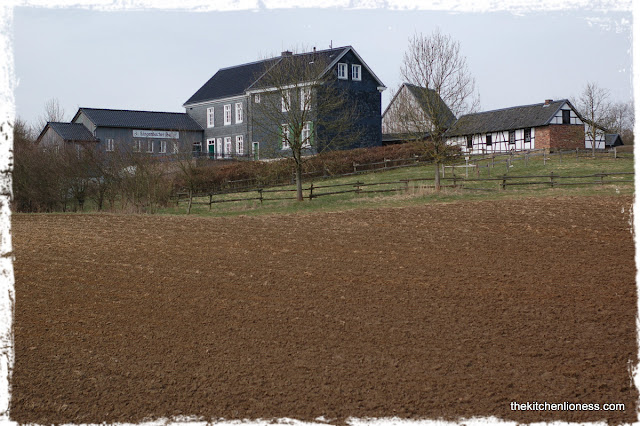 The opulence of the food emphasized the special hospitality of the region and attracted many city dwellers out into the green countryside to enjoy eating sweet yeast buns (with or without raisins), various black and rye breads, sweet spreads as well as hearty things to put on your bread like honey, pear- or apple butter or sugar beet molasses. 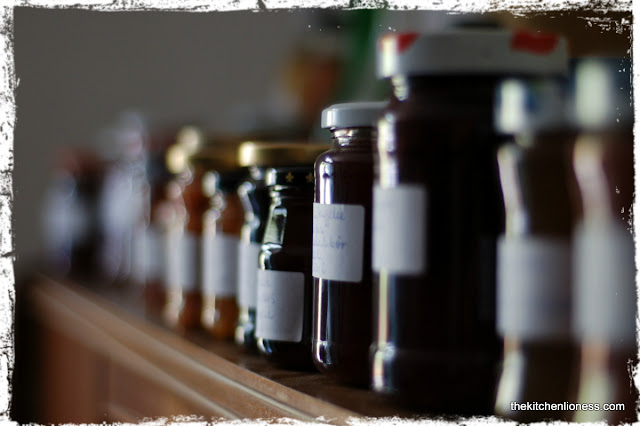 There was also butter, quark, and cheese, in addition to blood pudding and liverwurst, ham as well as various cakes and, in some places, boiled or scrambled eggs. Another essential item is rice pudding with cinnamon and sugar and freshly baked Bergish waffles with hot sour cherries. And the Bergische Kaffeetafel is always dominated by the Dröppelminna (Coffee Maid), a special coffeepot made of pewter. While enjoying your coffee, it is traditional to dip the Burger Pretzel into your coffee. 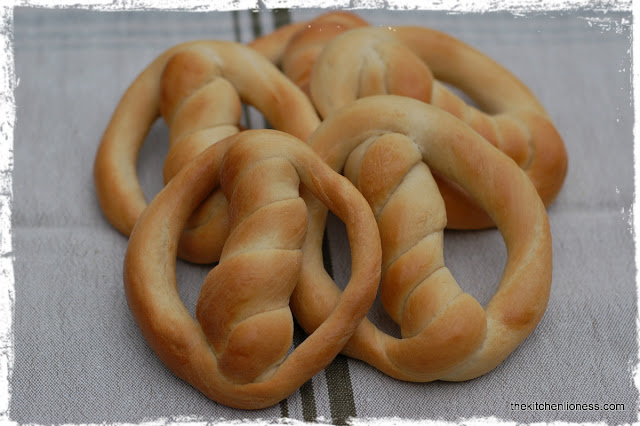 Since 2010 the Burger Pretzel has been a passenger of the so-called Slow Food’s Ark of Taste (Arche des Geschmacks). The international project of Slow Food lists about 1.000 endangered, but regionally important products and points the public to the loss of food culture. In the region of the Bergish countryside (Bergisches Land),  a group has initiated a campaign to save the Burger Pretzel by organizing baking workshops, gastronomic weeks and special events like “German Bread & Butter Day”. 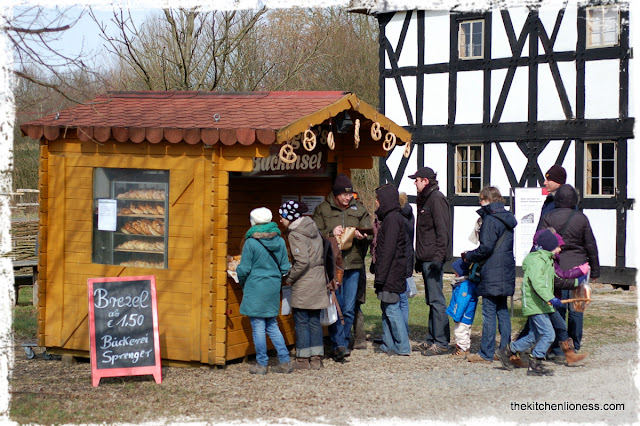 The recipe yields 10 to 12 pretzels

Ingredients for the Pretzel

Preparation of the Pretzel 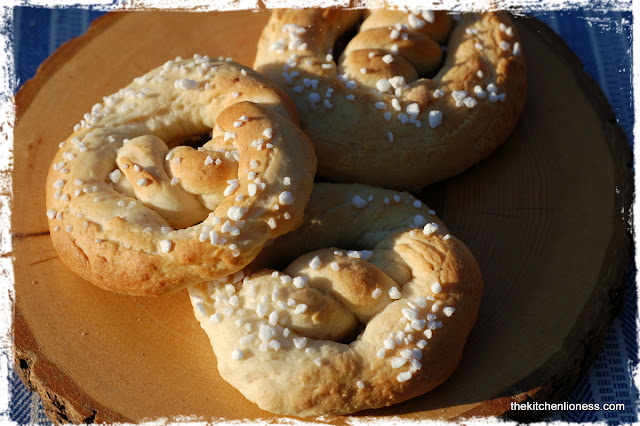 NOTE: the Pretzel will taste like sweet buns on the first day and they can be kept for several months if stored properly – at that point they will taste like rusks and can be enjoyed by dunking them into coffee or tea. 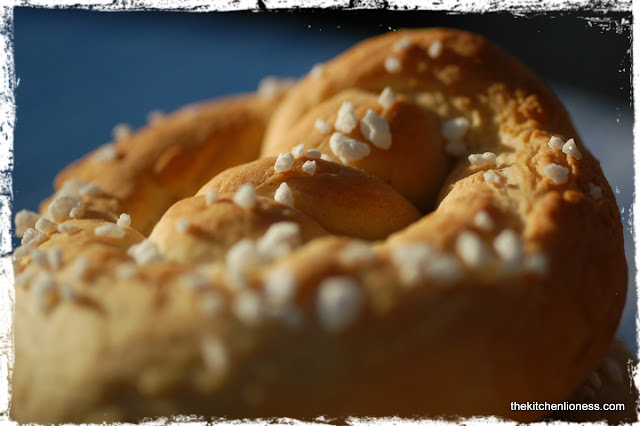 I  baked one batch using spelt flour (Dinkelmehl) and no sugar for decoration (you can the the results on the first and eighth picture) and the second batch with regular all purpose flour (Weizenmehl Type 405) and sugar (you can see the results on the forth, tenth and eleventh picture). Both times the Pretzel turned out wonderful - the recipe is easy and forgiving and we liked to eat them the same day while they were still soft and tasted a bit like regular sweet buns.

For more information regarding the Working Group for the Burger Pretzel and the local chapter of Slow Food, please click: 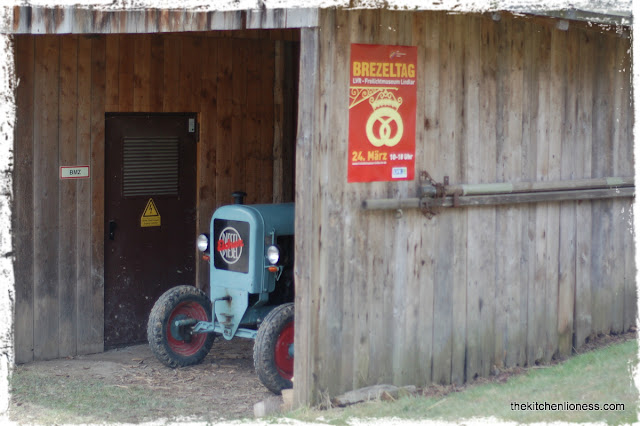