FFwD - Vegetable barley soup with the taste of little India


Today´s recipe for the French Fridays with Dorie group is ”Vegetable barley soup with the taste of little India” – a basic root vegetable soup with barley and surprising warm spices. 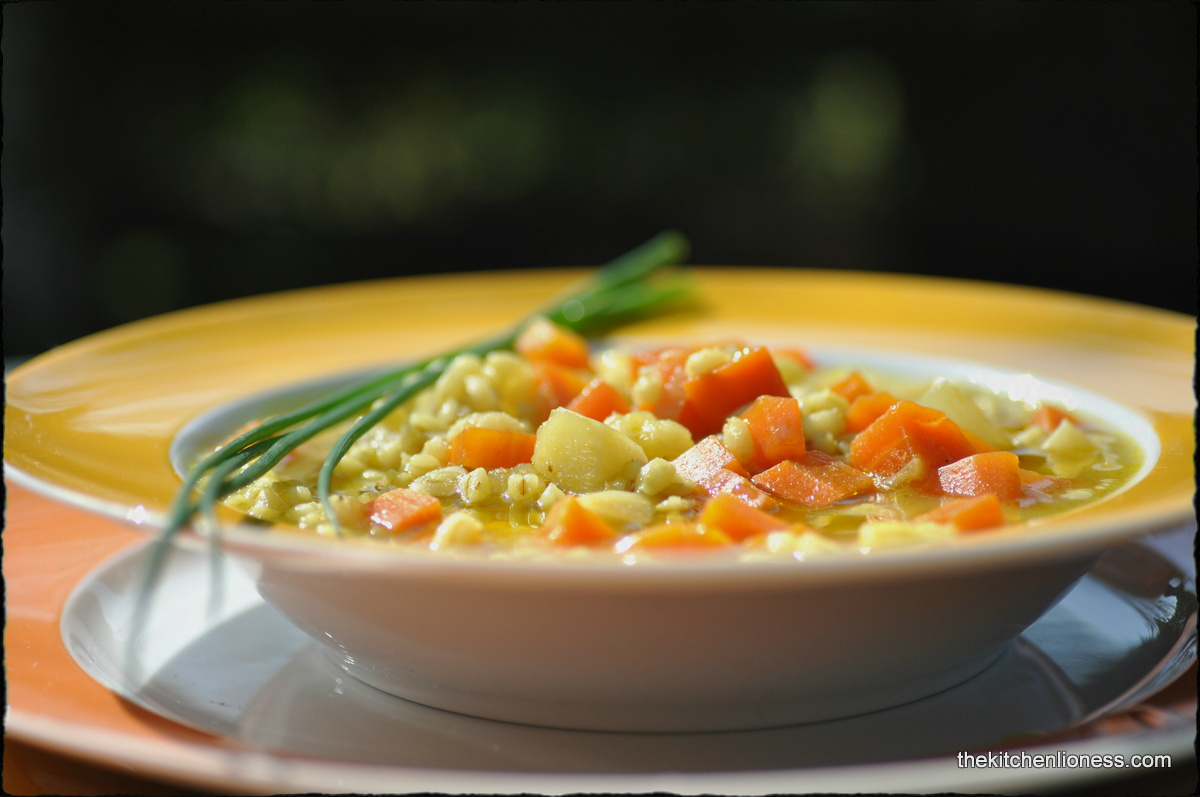 The soup base is made up of onions, garlic, sweet carrots, and parsnips - since I could not find parsnips at this time of year, I used small white turnips instead. Then there is fresh ginger, freshly grated black pepper, sea salt, turmeric, and garam masala. 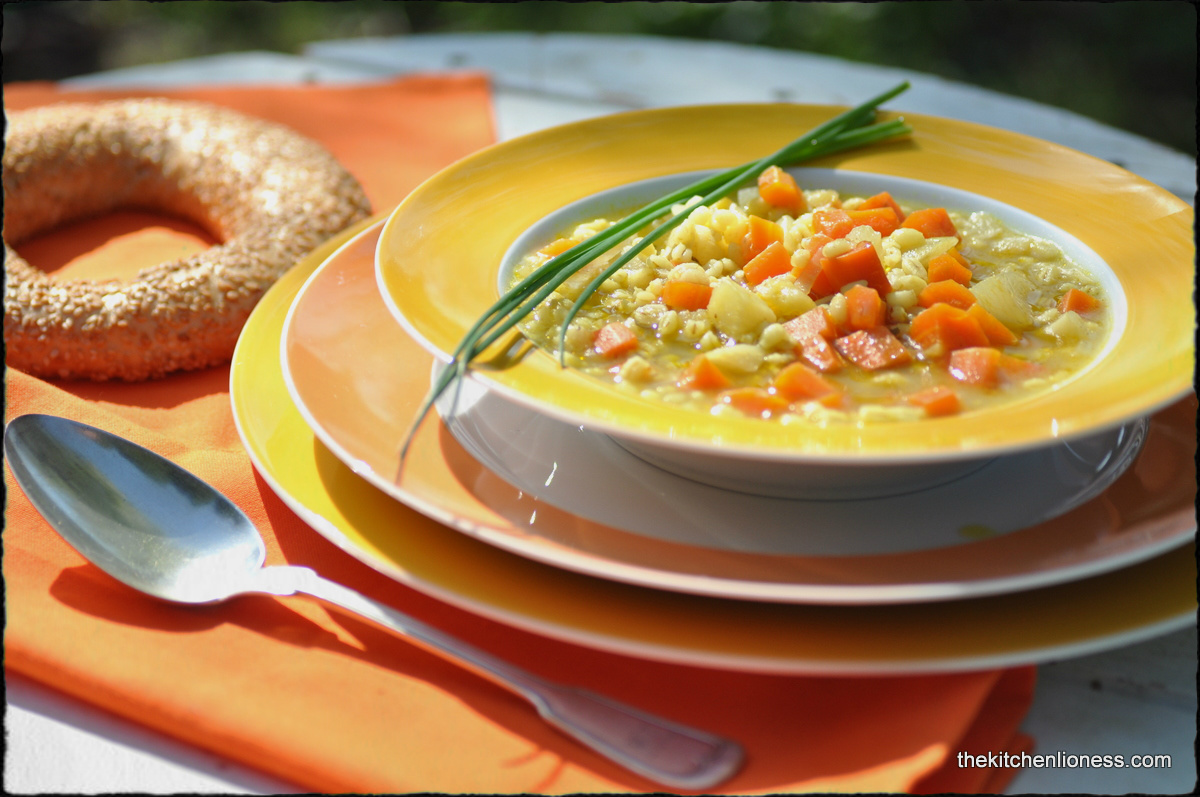 Tumeric is a bright yellow spice that comes from the rhizome of a plant in the ginger family. It is sometimes available fresh, but is usually sold dried and ground, in powder form. Turmeric has anti-oxidant properties which is why it has long been an Indian home remedy for many illnesses. Turmeric is often a component of curry powder and it  also gives chutneys and pickles, and this soup,  their distinctive yellow tinge. It has a slight peppery aroma and a musky taste. 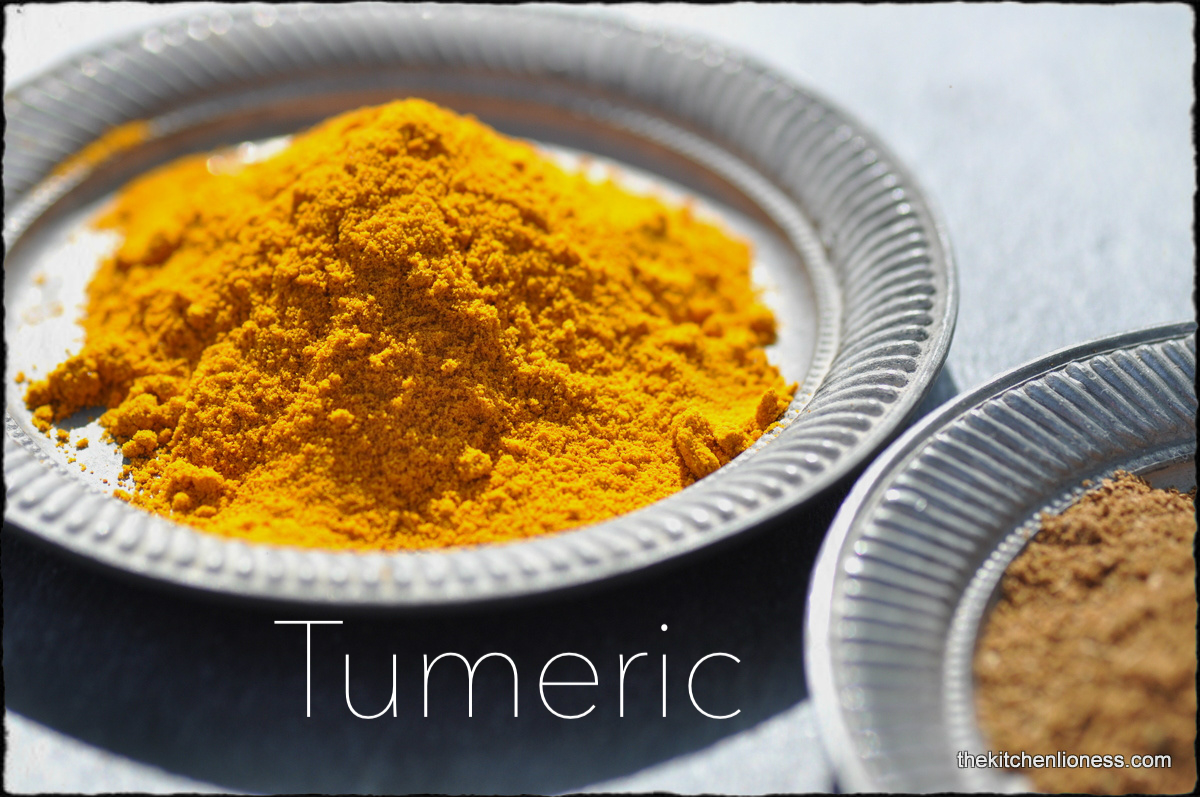 Garam masala is an aromatic mixture of ground spices used as a base in many Indian dishes (“masala”means spice). The proportion of spices changes according to the dish being cooked but typical ingredients are cumin, coriander, cardamom, cinnamon, cloves and black pepper, with substitutions or additions made depending on whether the dish includes meat, vegetables or fish. You can grind your own garam masala according to your tastes, but it can also be bought ready-made. 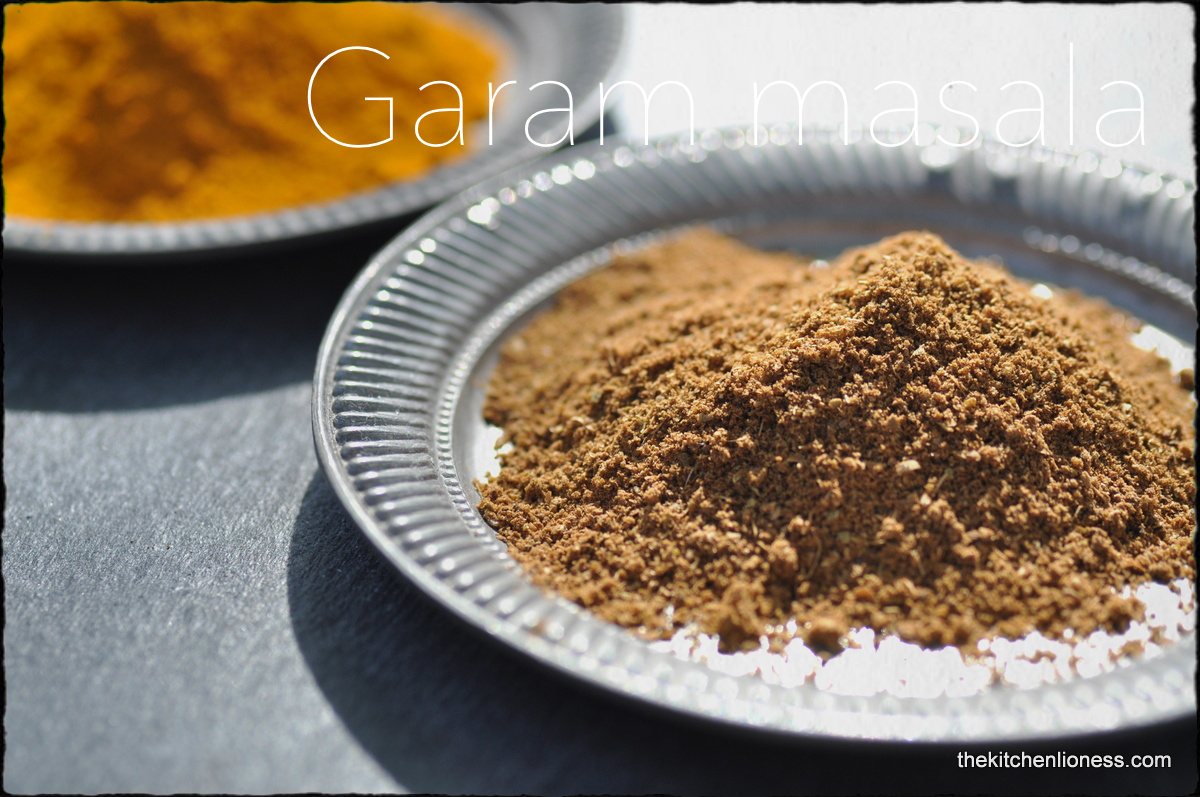 The spices are sautéed together with the vegetables in some lovely olive oil, that takes about 15 minutes and it takes the raw edge off the spice and makes for a harmonious soup starter. After the veg are softened, all that is left to do is add the homemade chicken broth and the soup barley, Barley is divided into three categories around here, small, medium and large – I used the large one, called soup barley which needs a good 30-minute simmer before being puffed and ready to eat. 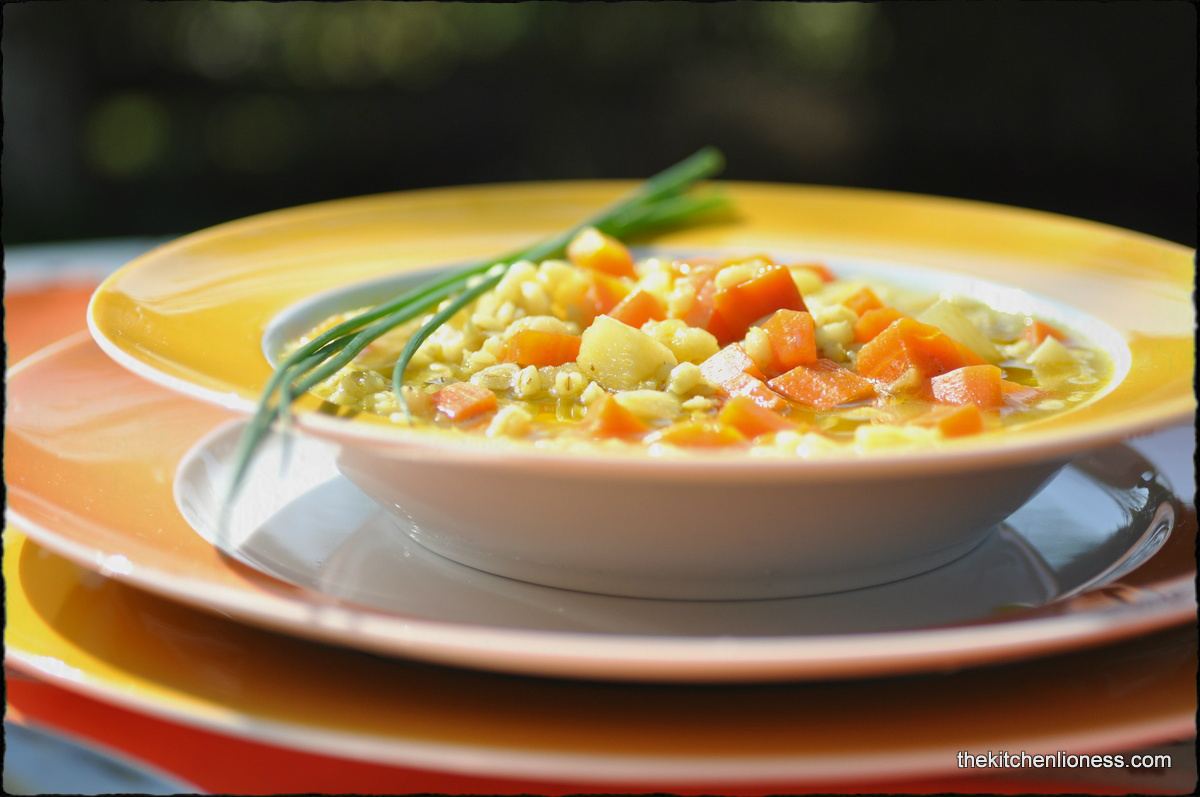 I must say that the taste of this soup was surprising, in a nice way, as we are so used to eating barley soup with lots of veg and bacon and sometimes a bit of smoked sausage – well, a very German kind of way – but we liked how the soup smelled while it cooked and how it tasted when we ate it for lunch, on a very bright and sunny day that felt like early summer.Thanks to Dorie, a new taste experience indeed, one that I would not have dared to try before I came across this weeks´ assignment. 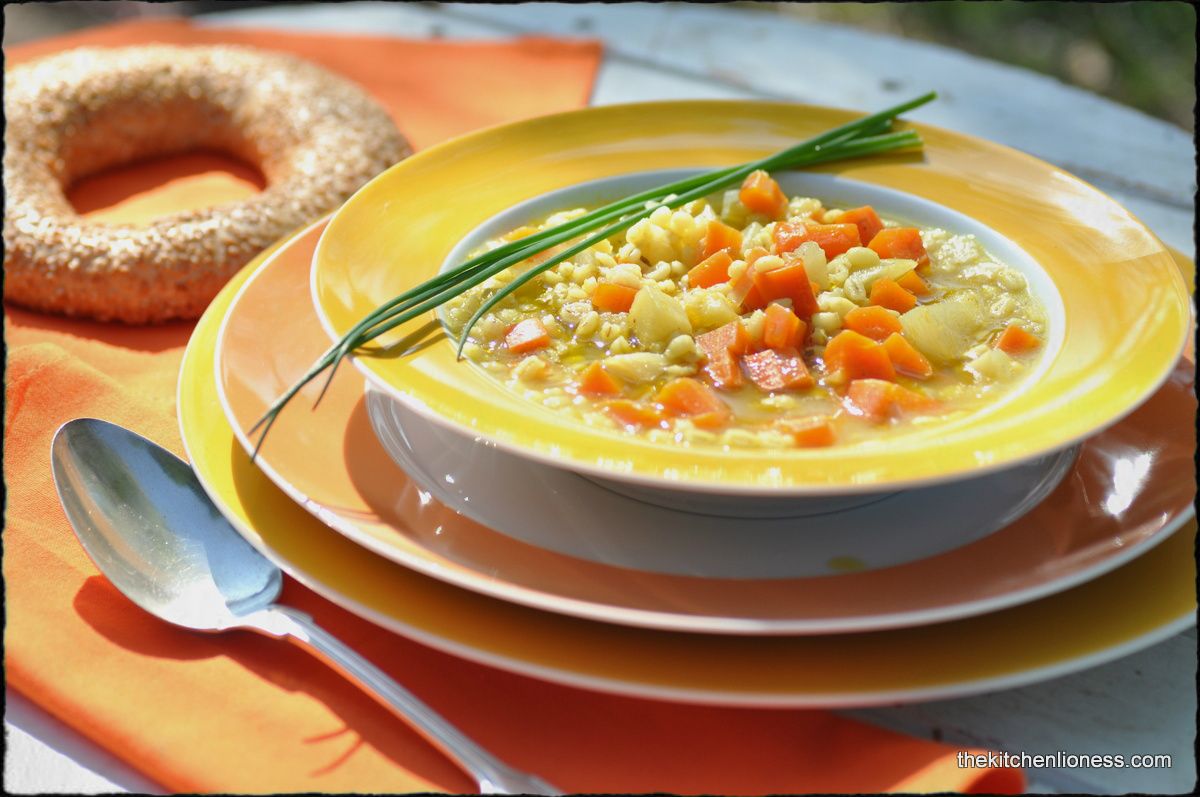 If you happen to own Dorie Greenspan´s book “Around my French Table”, you will find the recipe for ”Vegetable barley soup with the taste of little India" on page 89.