Today´s recipe for the French Fridays with Dorie group is Veal Marengo, a hearty veal stew from Provence with tomatoes, mushrooms, olive oil and herbs. 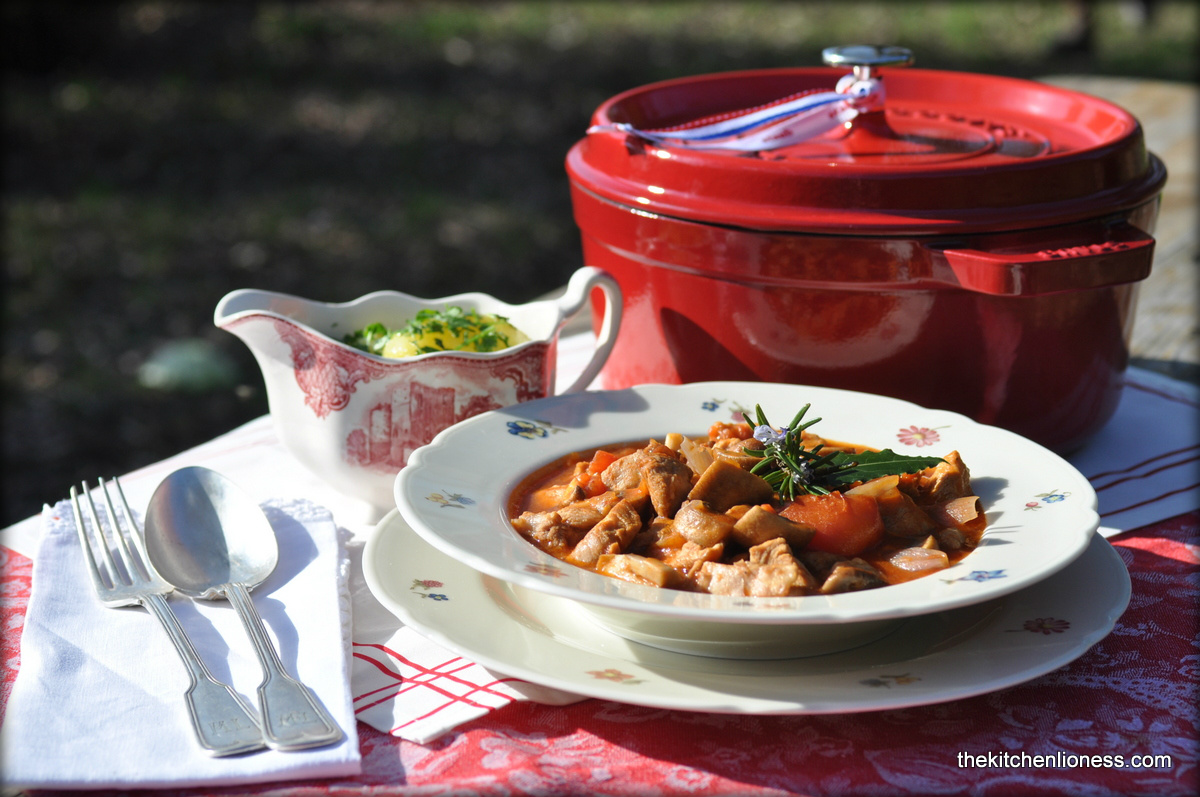 Oftentimes, French cuisine is full of myths and fables. Classic recipes frequently have disputed origins, as with this dish, named „Marengo“, after the June 14, 1800, Battle of Marengo in northern Italy between French forces under Napoleon Bonaparte and Austrian forces. Napoleon wanted a celebratory meal and legend has it that Napoleon’s cook, a Swiss chef named Dunand, the son of a chef for the Prince of Condé in France, assembled some meagre provisions available to him in his battlefield kitchen. Blessed with boundless talent, the cook created a dish of chicken, tomatoes, craw fish, eggs and water and presented it to the famous Commander after the decisive clash. Napoleon liked it so much that he demanded to eat the dish after each and every victory. 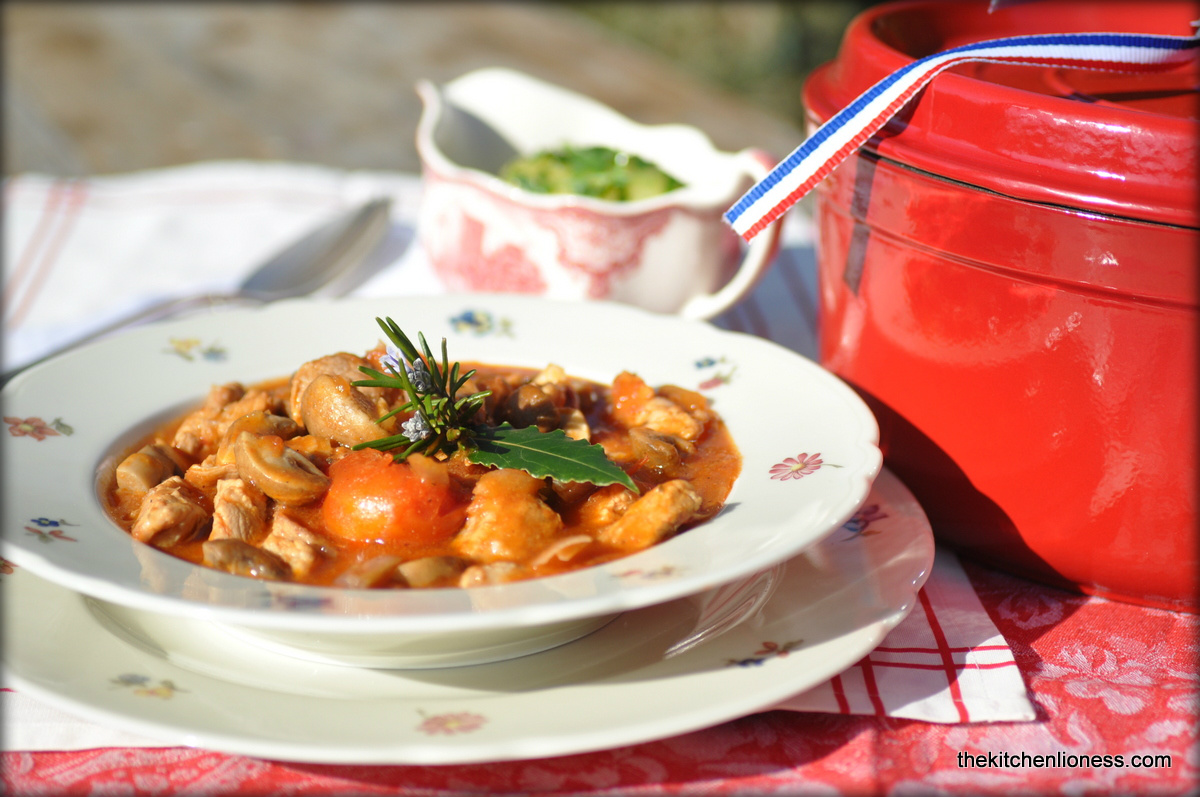 Some writers suggest that over the years, Chef Dunand replaced the chicken with veal, dropped the crayfish, fried eggs and toasted bread and added mushrooms and wine. Be that as it may, Dorie´s recipe which is based on a recipe from Le Cordon Bleu in Paris, calls for veal shoulder, onions, tomatoes, white wine, bouquet garni, cipolline, mushrooms and baby potatoes to serve. 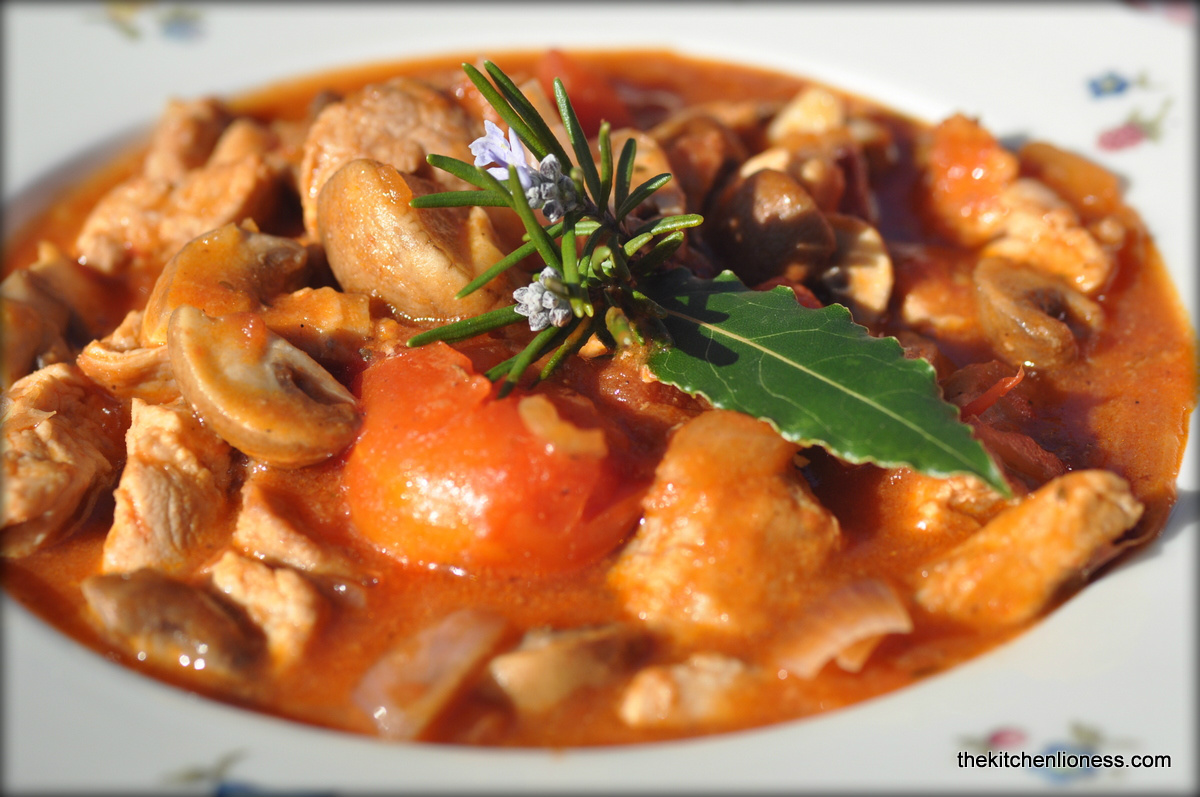 For today´s recipe you have to toss cubed boneless veal shoulder in well-seasoned flour to coat. Then in a lovely cocotte, heat oil over medium-high heat and brown the veal cubes. Transfer the browned veal to a plate. In the same cocotte, over medium-high heat, cook onion, tomato paste and tomatoes. Add white wine and a nice bouquet garni (fresh thyme, parsley, rosemary and and a bay leaf). Add the veal back to the cocotte, season with freshly ground black pepper and some sea salt, cover and cook on low for about 30 minutes. In the meantime you cook the pearl onions (since I could not find those, I used French shallots instead  and mushroms (I used baby portabellas) separately. Do not forget to boil some nice, small potatoes in the meantime. To serve, add all the cooked components to your plate and serve the boiled potatoes alongside. 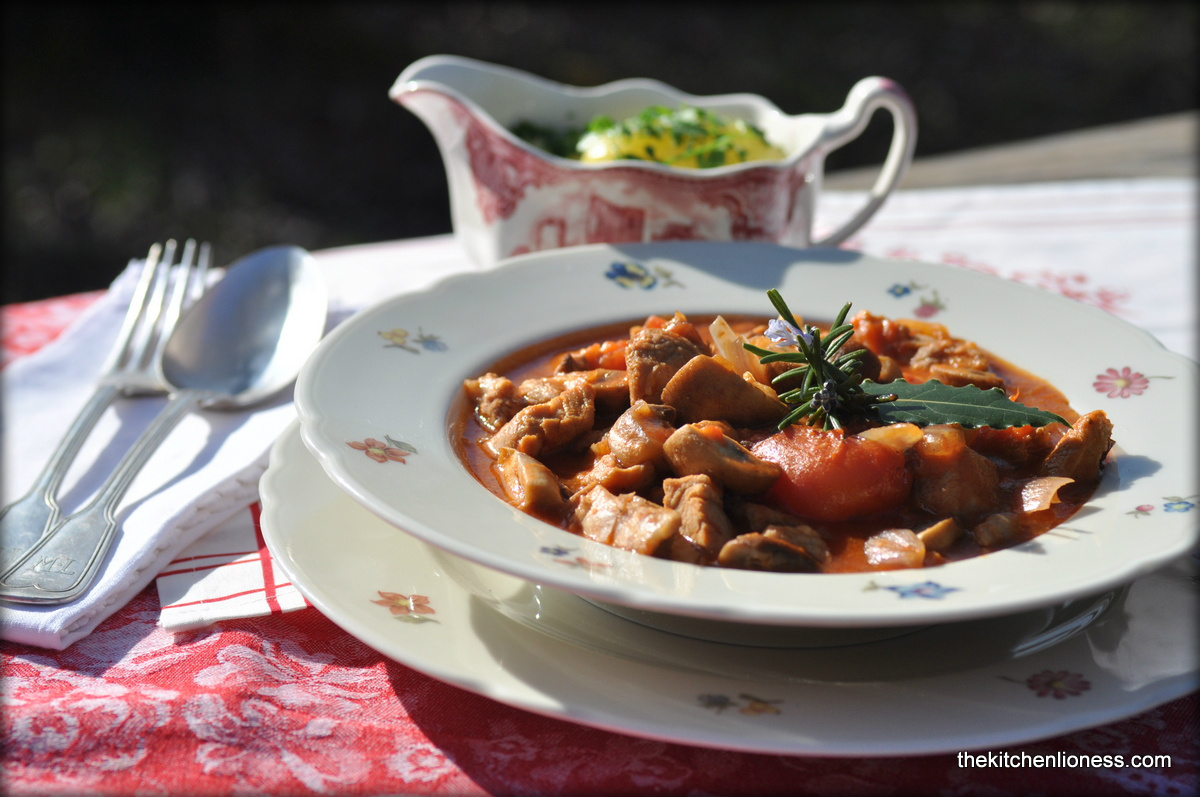 Instead of adding the chopped Italian parsley to the veal stew, I tossed the small potaoes in parsley-chive butter – my grand-mother used to serve potatoes this way and I have a soft spot for serving spuds prepared the same way she did as these simple potatoes are a delicious accompaniment to hearty stews like this Veal Marengo.

For Parsley-Chive-Potatoes you simply put the unpeeled potatoes in a large pot and add water to cover the potatoes by 2 inches. Season the water with salt and bring to a boil over medium-high heat. Reduce the heat to medium-low and simmer until the potatoes are tender when pierced, about 10 to 12 minutes, depending on their size and weight. Drain the potatoes well, peel and transfer to a serving bowl. Add the butter, chopped parsley as well as chives and carefully toss to coat. Serve immediately while still nice and hot. 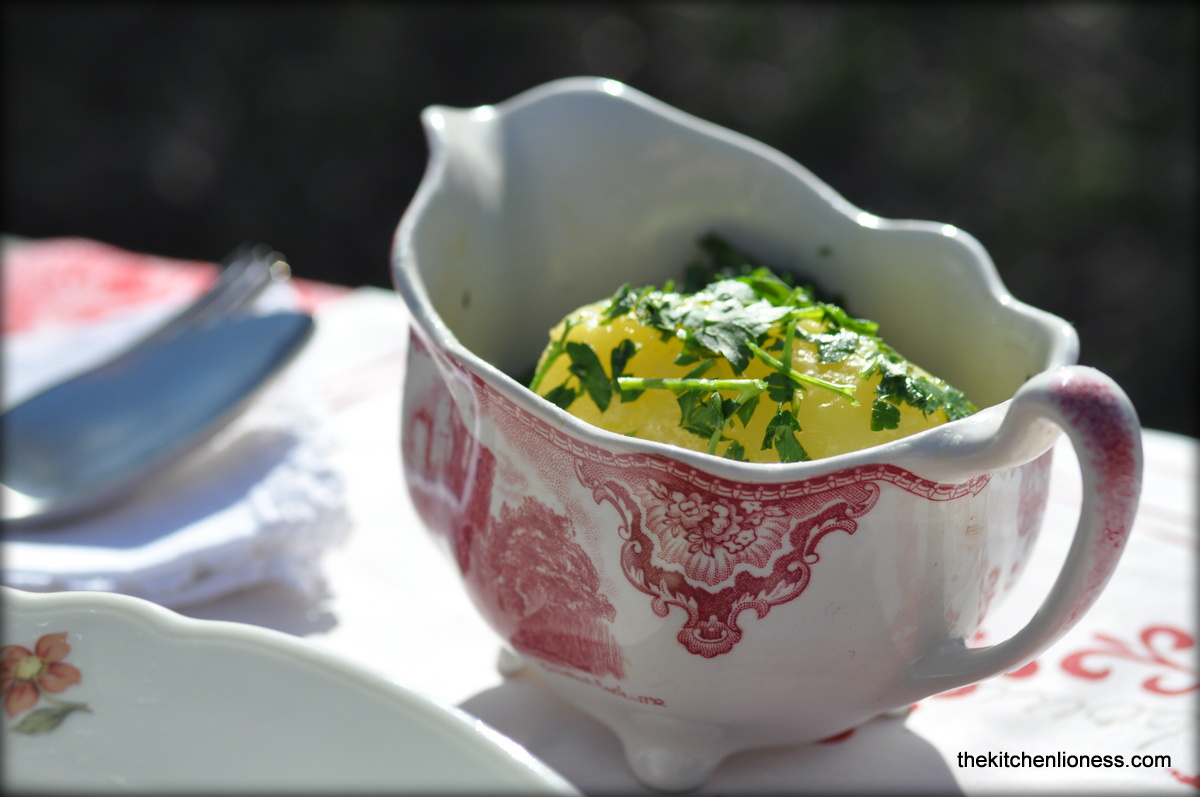 We all loved, loved this stew and the kids could not get enough of it – absolutely delicious. Tender meat, very tasty sauce with lots of mushrooms and shallots, just the way we like it. A celebratory dish indeed, it is rich and tasty and would also be perfect for a dinner party.

And what better recipe than this one to show off my new, absolutely beautiful, show-stopper of a bright red cocotte from Staub Germany that I just received last week!!! Thanks so much to the kind folks at Staub!!! 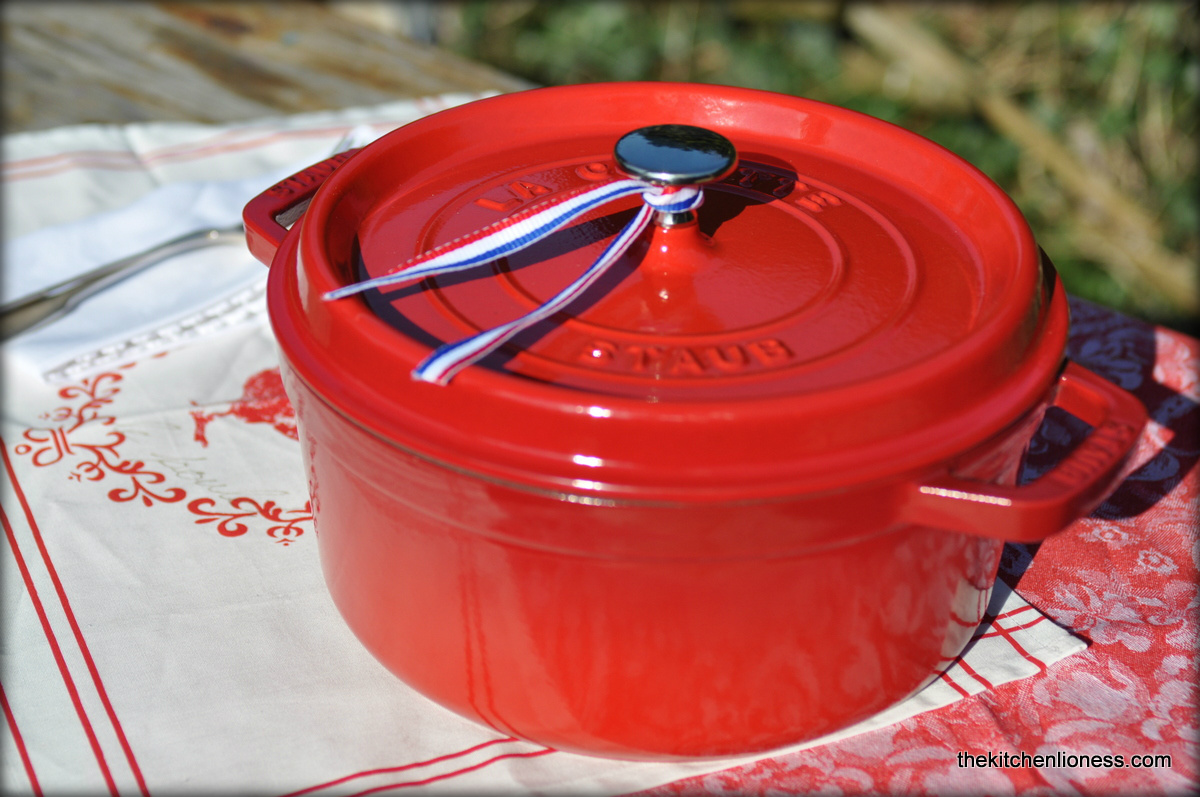 For copyright reasons, we do not publish the recipes from the book. But you can find the recipe for “Veal Marengo “ on pages 264-66 in Dorie Greenspan´s cookbook "Around my French Table".