Final Recipe for French Fridays with Dorie - Chicken in a Pot: The Garlic and Lemon Version


Today´s final recipe for the French Fridays with Dorie group is "Chicken in a Pot: The Garlic and Lemon Version". Cooking everything together at once allows the ingredients and flavors to meld and complement each other in a way they do not when prepared separately. This dish is quite simply a one-pot wonder. 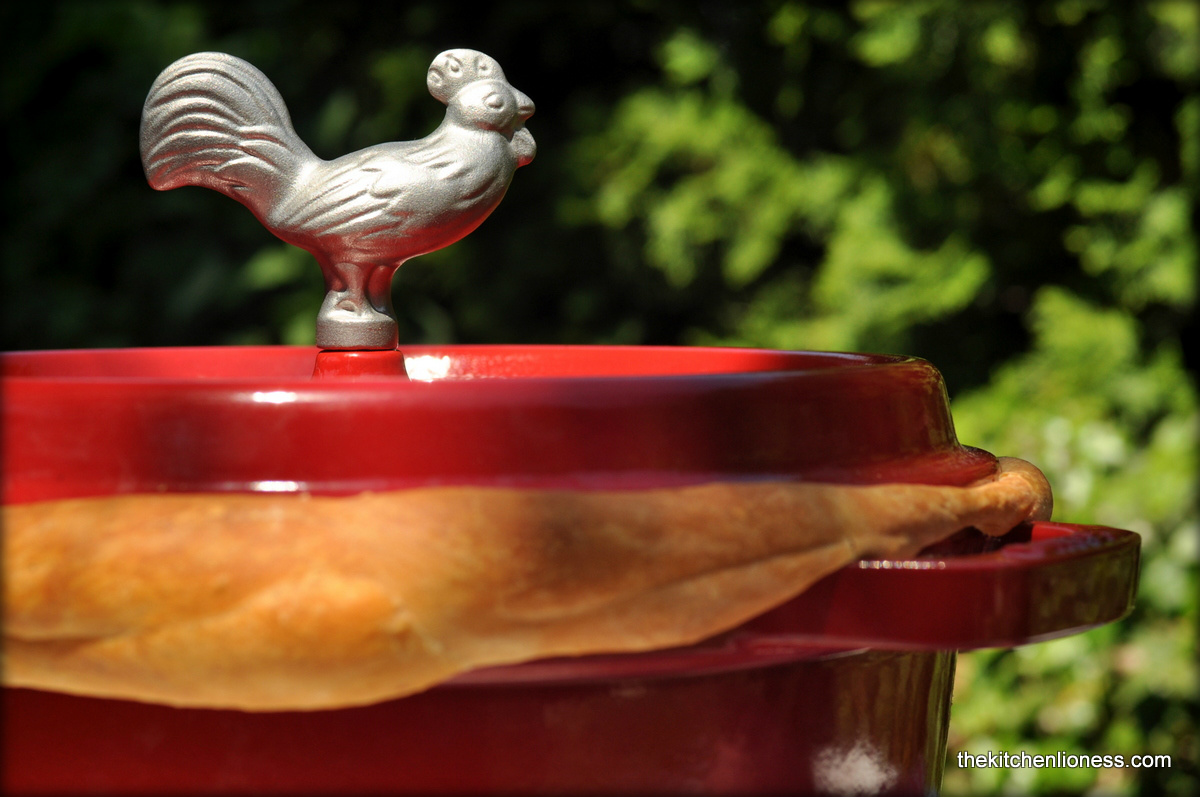 To prepare a chicken this way, you will need a large casserole pot with a fitted lid - what a more fitting recipe than the last one to use my beloved bright cherry red Staub Cocotfe again. And although the prep takes a bit of time, the chicken itself needs only about an hour in the oven.

The first step for me was the preparation of a pizza dough for the bread rim using white spelt flour, water, a bit of sugar, mild olive oil, and sea salt. While the dough was resting in a warm place (sunshine on the terrace), I browned the vegetables that Dorie´s recipe calls for, namely the cloves from four entire heads of garlic, French shallots, celery, carrots and teeny tiny fingerling  potatoes – instead of the sweet potatoes – because the kids are crazy about those fingerlings and because they are in season around here and hold their shape well when cooked in a lot of liquid. Then I browned the chicken on all sides. Placed the veg in the casserole, then the chicken around and on top the veg, added lots of lemon thyme and rosemary from the garden, some dry white wine, chicken stock and one cut up organic lemon (instead of the preserved lemon which I could not get my hands on today). 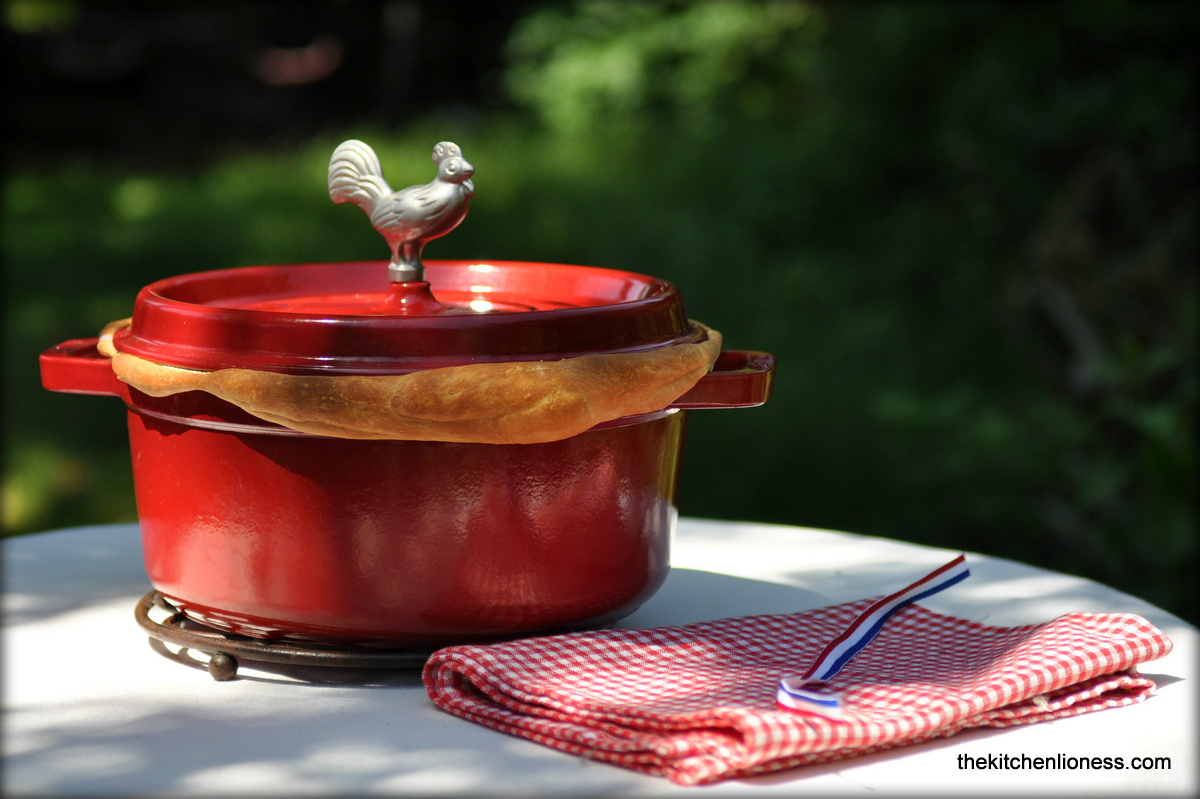 By the time I had finished those steps for the recipe, the dough had risen enough. I formed it into a large rope, draped it around the rim of the cocotte, placed the lid on top and into the oven it went for a good hour. I lightly oiled the rim of the pot before pressing the dough on the rim - I thought I would not be able to break the bread rim off otherwise. But that was probably not necessary.

Then it was time for the reveal – carefully pried the lid open with a screwdriver (following Dorie´s advice) and marvelled at the results. 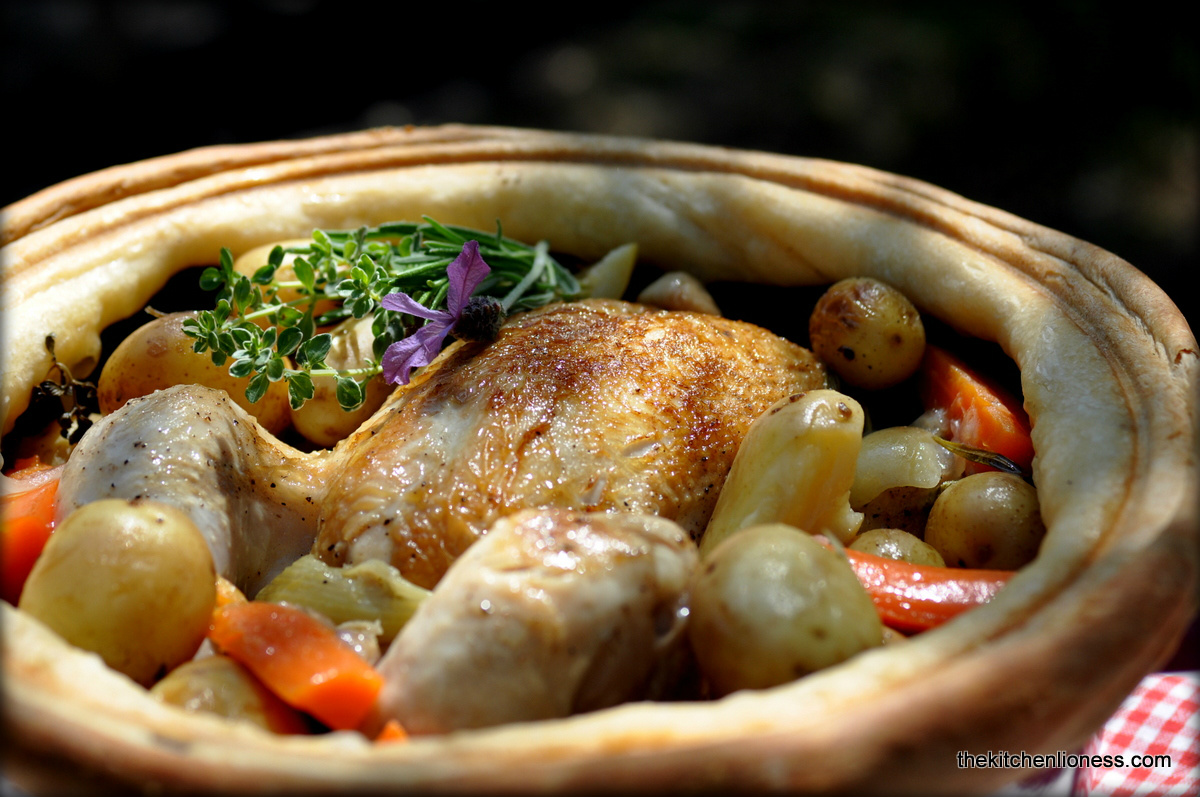 Pot-roasting/braising chicken this way makes it incredibly moist and all that garlic only subtly flavors the chicken but does not overpower it. The herbs lend a nice flavor as well – especially that fabulous lemon thyme. And the vegetables still had enough bite so that they did not fall apart when served – lots of liquid to be mopped up with parts of that bread rim and some additional baguette. 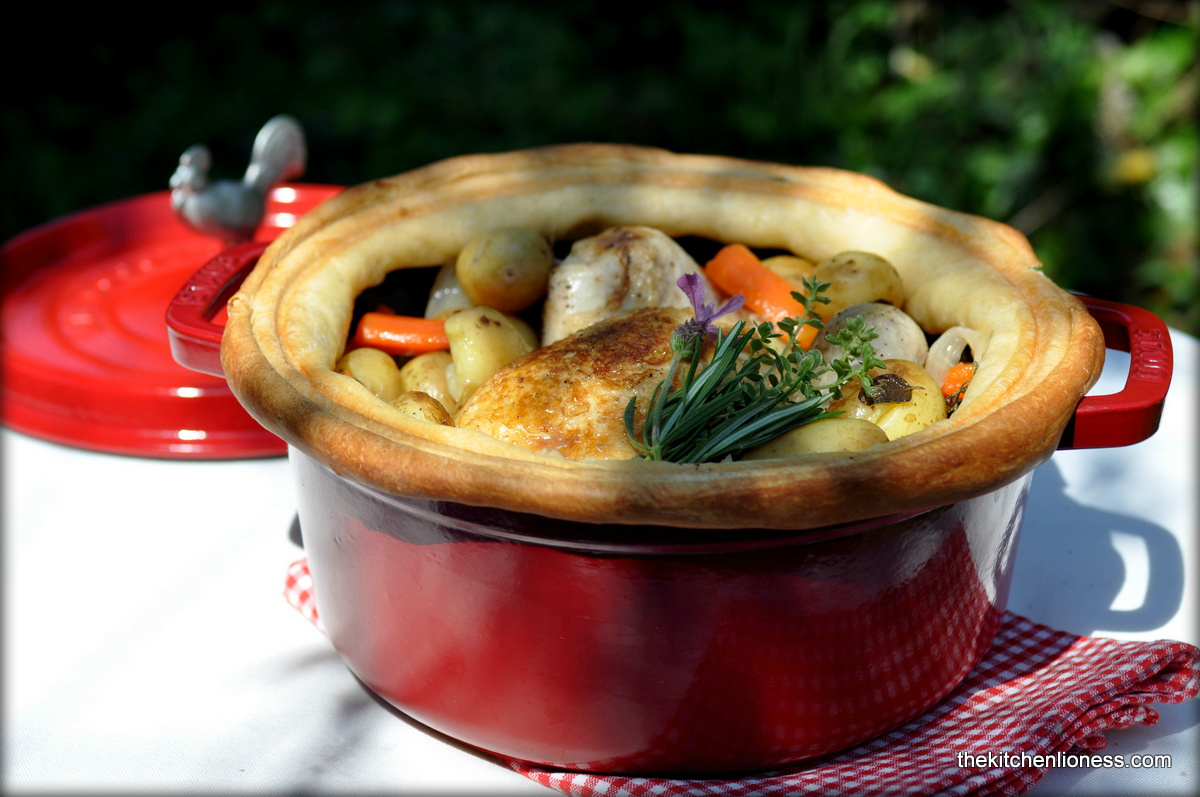 You can either carve the bird at the table, then remove the legs first, then carve off the breasts. If you are not confident of dividing the chicken at the table, you could quite easily do it in the kitchen before spooning over some of the cooking liquid and serving some of the veg alongside, but the dish then loses a bit of dramatic effect.

We enjoyed this recipe and it was a wonderful and fun method of cooking on this Friday when I had these bittersweet feelings as this particular recipe marks the very last recipe that we cooked from this wonderful (and very my very worn) cookbook.

Cooking along with the other members of the French Fridays with Dorie group has been an experience that I would not want to have missed!

Who would have thought that I would be able to follow along for a few years and manage to make a lot of these dishes in my (yes, indeed) very small German kitchen?!

Thanks to all of you kind and thoughtful Doristas for letting me be part of this unique online cooking group that! 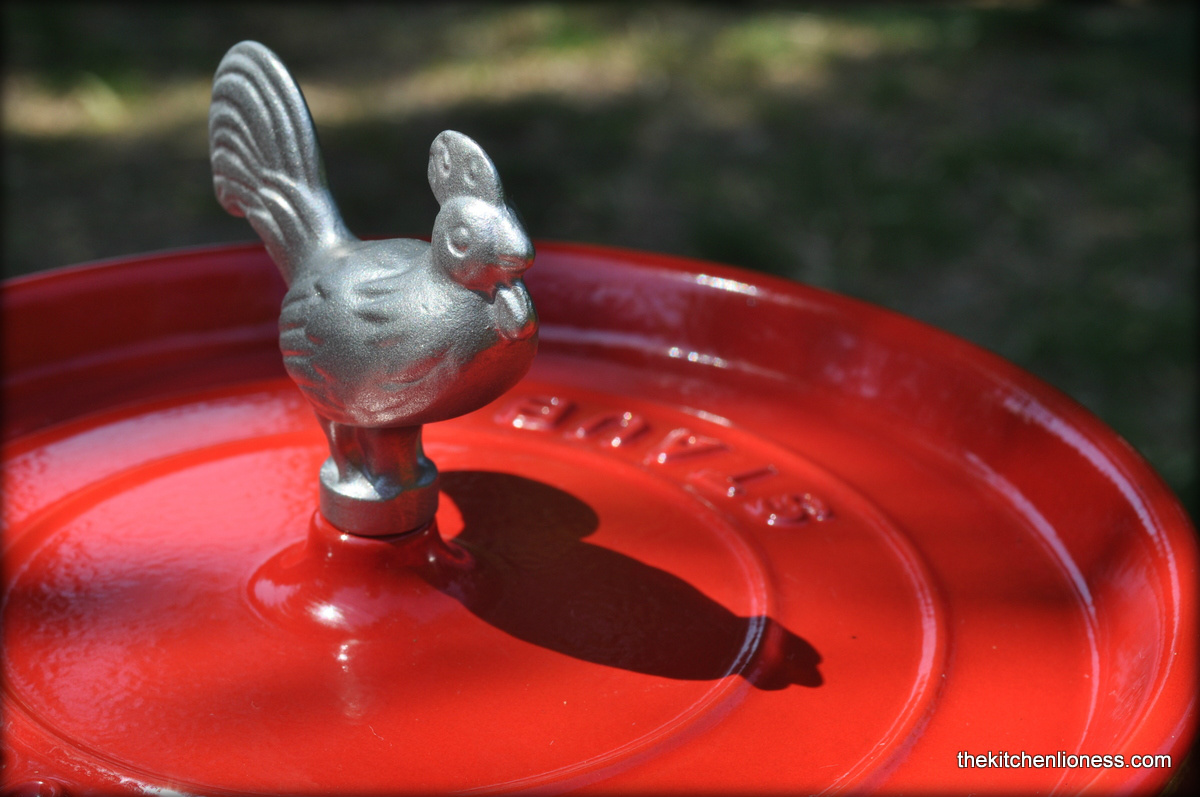 For copyright reasons, we did not and do not publish the recipes from the book. But you can find the recipe for the Chicken in a Pot: The Garlic and Lemon Version on pages 206-08 in Dorie Greenspan´s cookbook "Around my French Table".