In an Ottolenghi State of Mind


A few years ago a friend of mine invited me over for dinner. When I arrived at her house it smelled absolutely wonderful. All those aromas wafting at me and I was sitting comfortably in her kitchen enjoying myself and taking it all in. 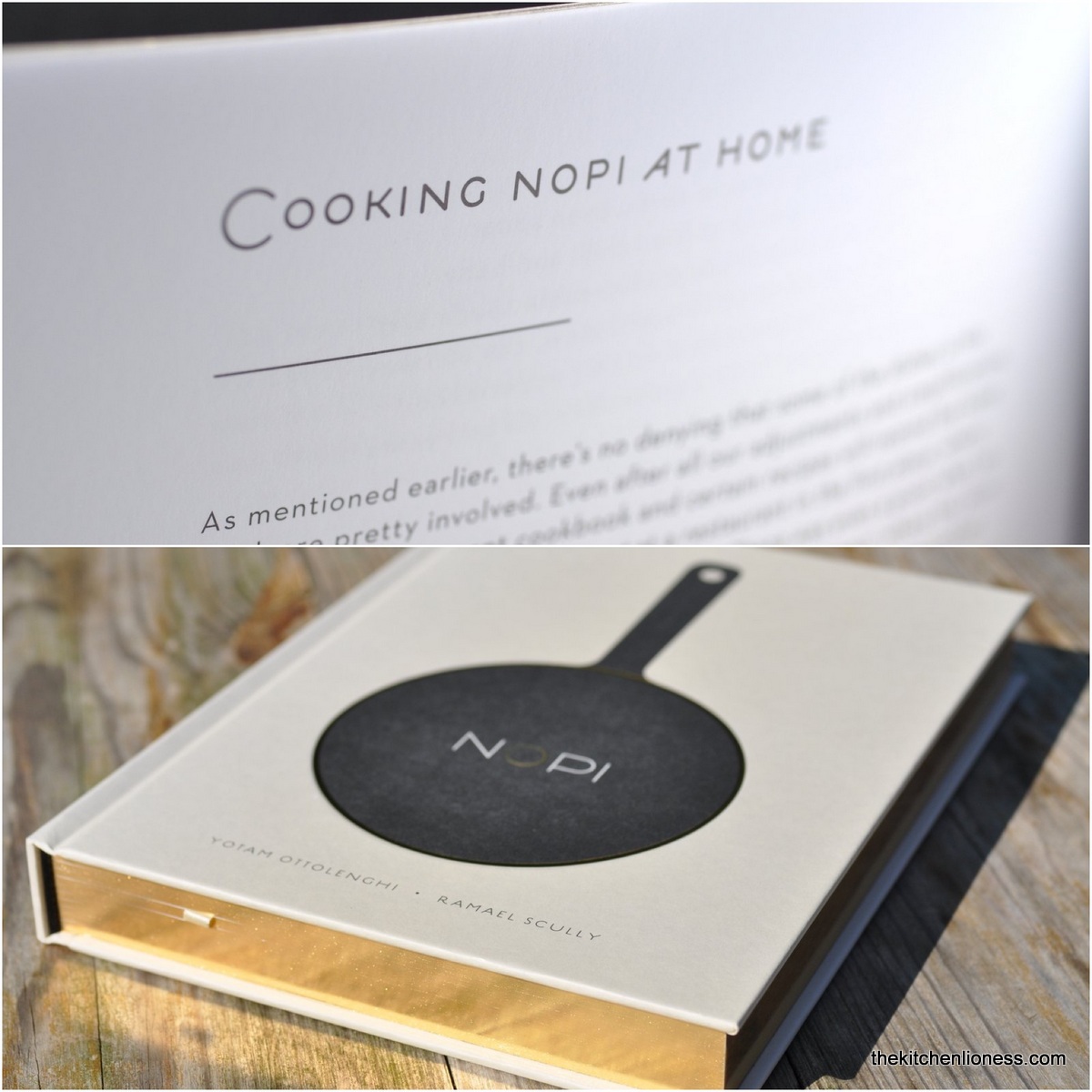 She lived in Thailand for about fifteen years and she had brought back all those wonderful recipes. Thai cuisine is her favorite cuisine and when she invited a group of us over for dinner that evening, Thai cuisine it was. 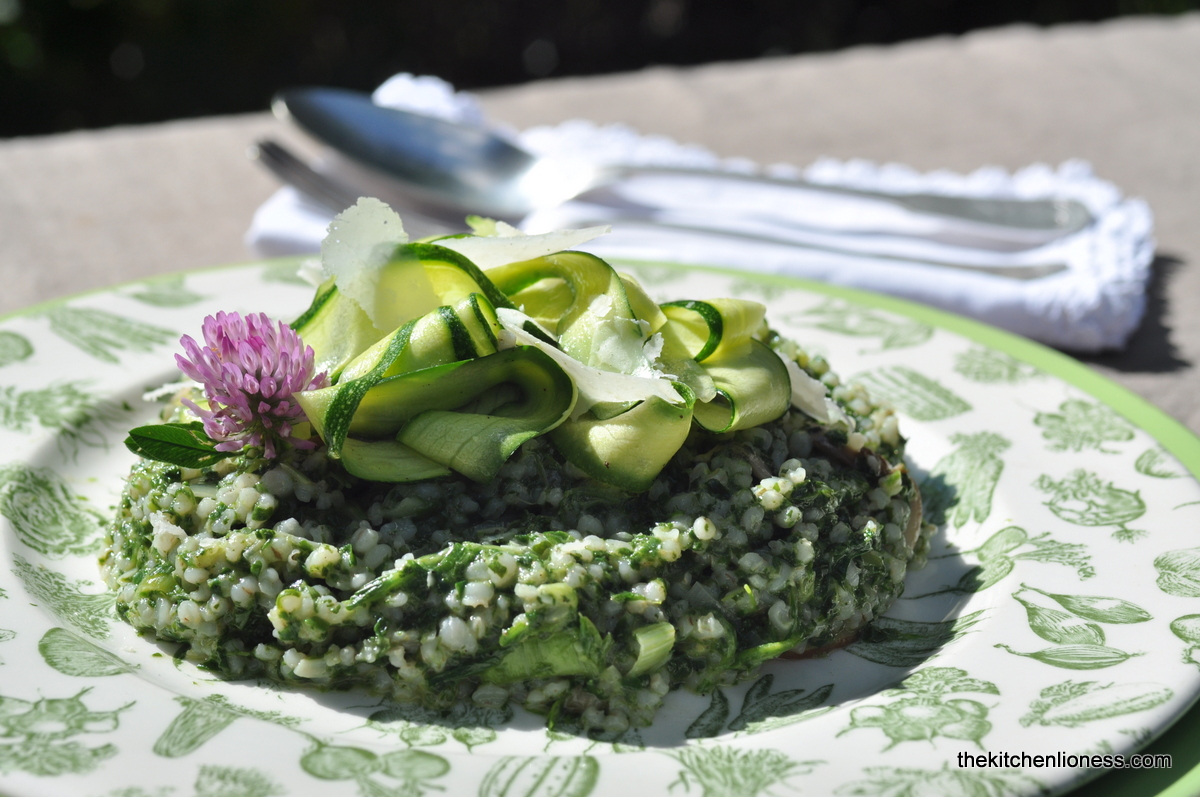 Back then Thai food was uncharted territory for me and I was curious – after the first bites, I fell in love with the way it tasted and when I turned around to tell her how much I enjoyed her food, she smiled at me and answered „you know of course that Thai food is addictive, my dear!“. 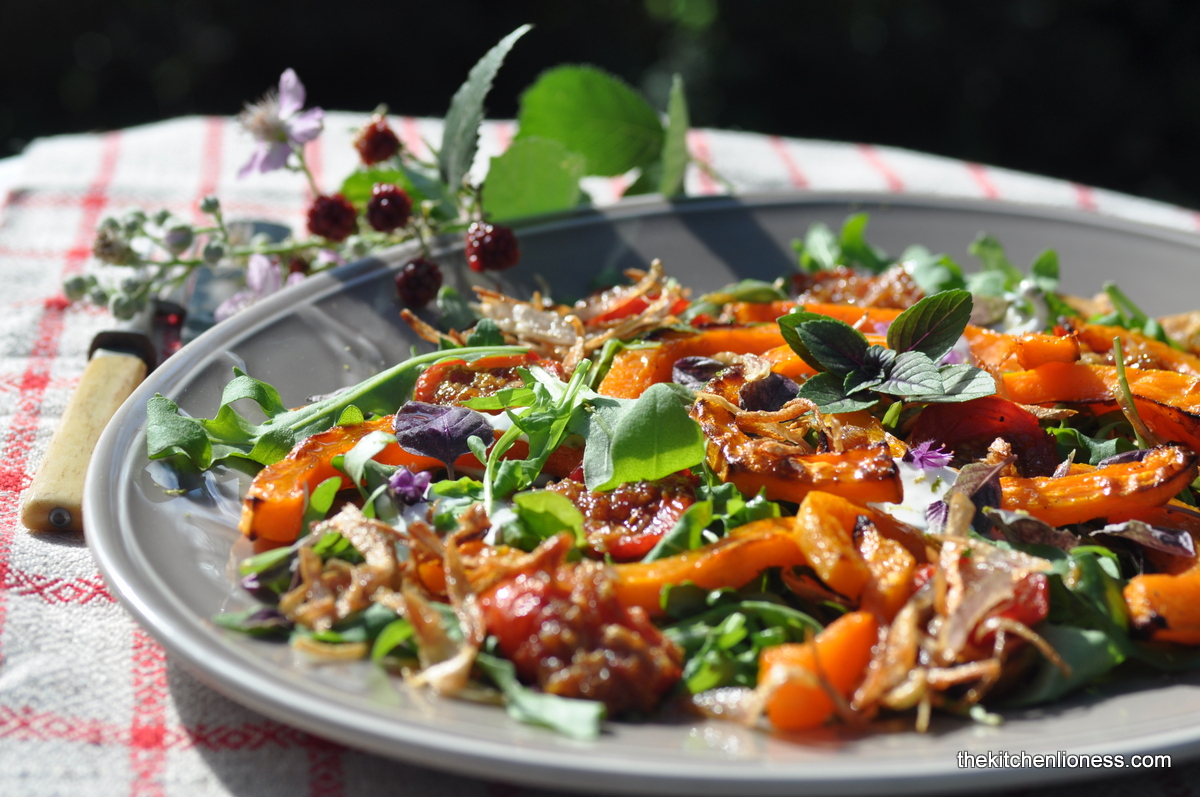 Over the years I have often thought about that sentence and while I have quoted it many times on many different occasions, I must say that many years have passed and things have changed a lot since. I have dived with utter gusto into Italian, French, Dutch, Belgian and German cuisine. I have attended more cooking events and classes than I can count, I have collected so many cookbooks and magazines over the years that I have considered renting a place with just shelves. 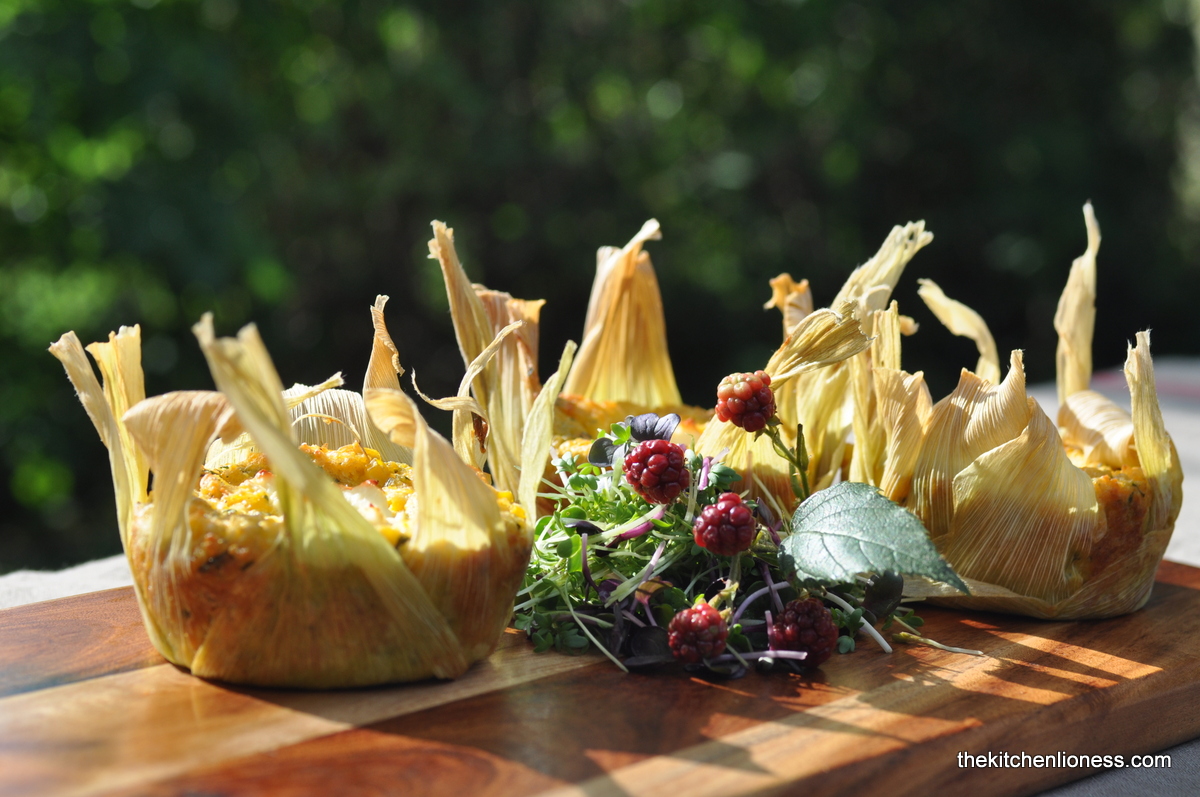 I have come to grips with the fact that it is not possible to embrace one cuisine and please all those happy taste testers at home all the time – there is a definite need for variety at our place – over the years I have always searched for another cuisine that would stick with me like another addiction, like the Thai food – to this day I leave that cuisine up to the experts like my friend. 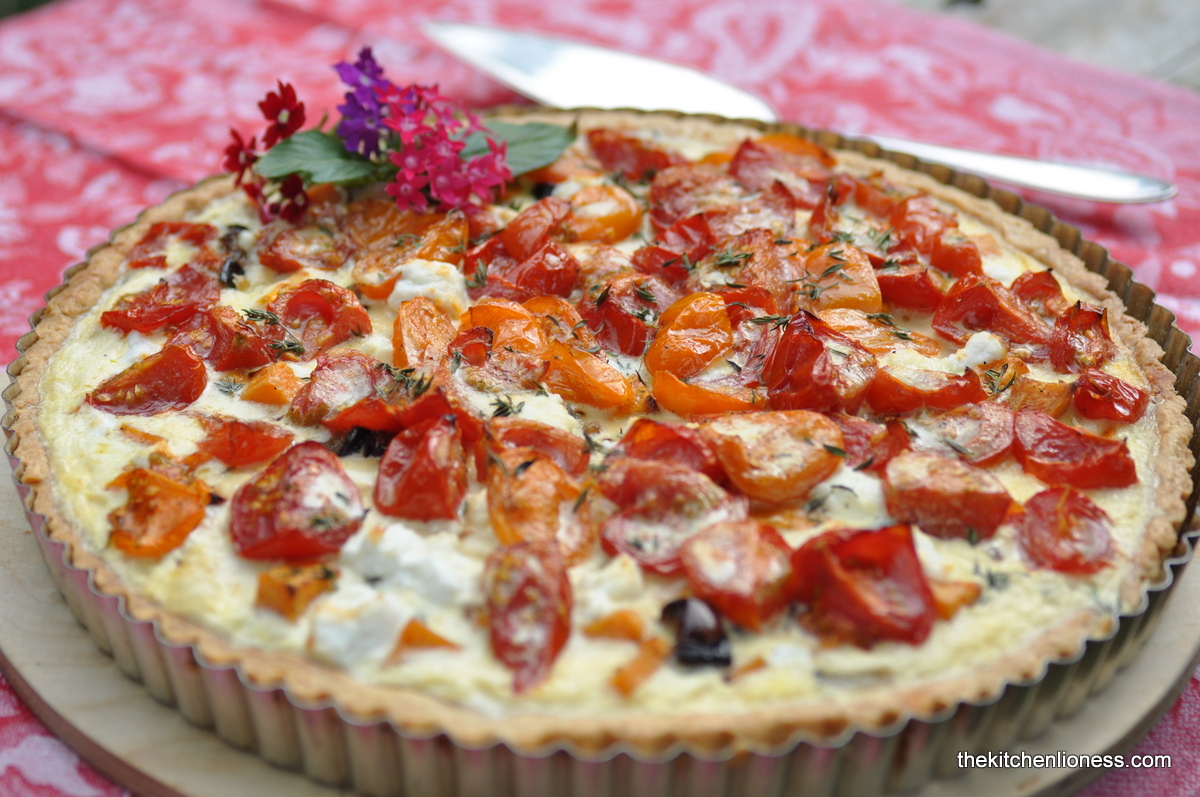 I was as pleased as can be to be cooking along with the French Fridays with Dorie group and introduce my family and myself to French cuisine, family-friendly delicious French cuisine and I took pleasure in seeing our kids taste everything from mussels to pâtés. I have also  happily turned my family into part-time vegetarians while cooking my way through Hugh-Fearnley Whittingstalls River Cottage Veg Everyday and watch our kids dive into everything from lentil soups, pearly barley salads and oven-roasted veggies – their lunchboxes are stuffed with left-over ratatouille and not peanut butter sandwiches. The Cottage Cooking Club is a wonderful outlet for all our daily vegetable inspirations.

My kitchen heroes hail from many different countries, I have a definite soft spot for those British cooks, have extensively reviewed traditional and non-traditional German cookbooks, I still enjoy cooking from my North-American cookbooks aand I do feel reasonably comfortable about translating Italian and Dutch recipes and making them my own. It is fun and it is educating to say the least – knowing a few languages does help, even today. 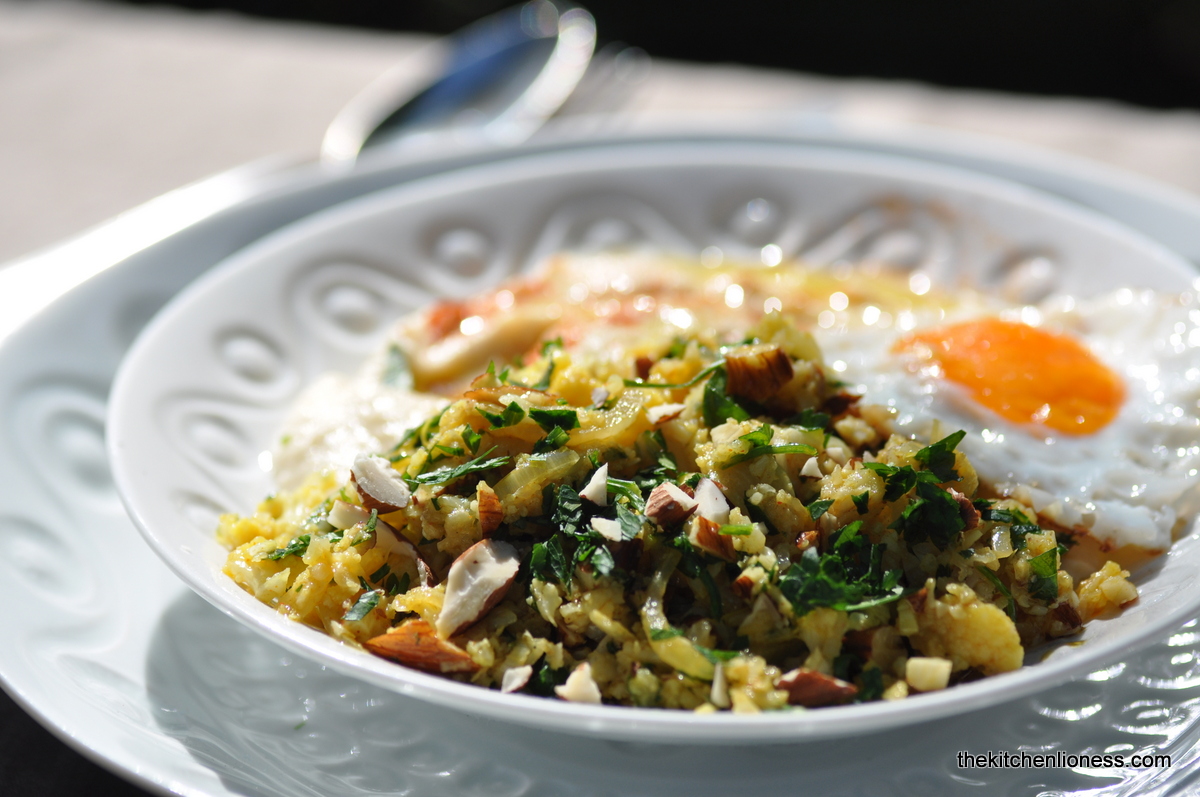 And let´s not forget about that blogging thing and the fact that I constantly ask people about recipes and ways they prepare a certain food – always looking for that extra something special. I cannot say that I have gotten very far though – for some inexplicable reason collecting cookbooks and recipes and magazines and watching endless cooking shows does not mean people are cooking more, let alone decide to experiment in their kitchens more. A collection of recipes does not make you a good homecook I guess. 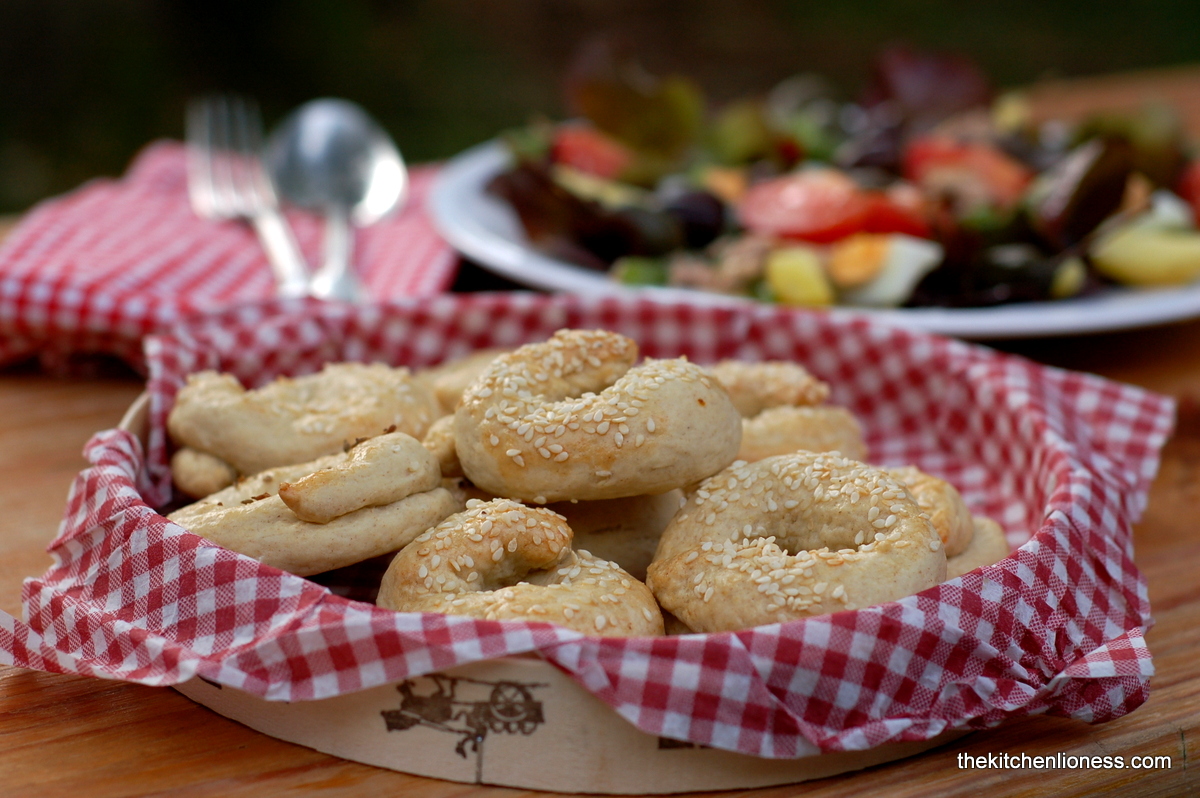 The other day I talked to my friend again on the phone, she lives a few hundred kilometers from where we live (for Germans that is still a lot) and I asked her about her now famous sentence – it still makes her laugh when I talk about it and I told her „you know, I have found another addictive cuisine“  - „you must have heard about Yottam Ottolenghi, we all have“. She agreed, we have all heard about him or adore his recipes and have collected a few of his books  I know, I know. „But how many of his recipes have you actually gotten around to cooking?“, I asked. There is a new cookbook that was published two days ago, on September 10th, it is called NOPI:The Cookbook and includes over 120 of the most popular dishes from Yotam's innovative Soho-based restaurant Nopi.

„It's written with long-time collaborator and Nopi head chef Ramael Scully, who brings his distinctive Asian twist to the Ottolenghi kitchen. Whether you're a regular at the Nopi restaurant and want to know the secret to your favourite dish or are an Ottolenghi fan who wants to try out restaurant-style cooking, this is a collection of recipes which will inspire, challenge and delight“.


During the last two days, I have managed to make four of the recipes from his new book called "NOPI"and one from his book „Plenty“ and one fron his book "Jerusalem" – considering that Ottolenghis recipes can be considered somewhat „involved“, not too bad at all.

The first recipe I tackled while waiting rather impatiently for the delivery of the new book, was the Very full Tart from Plenty – a fantastic Mediterranean feast, full to the brim with roasted vegetables. 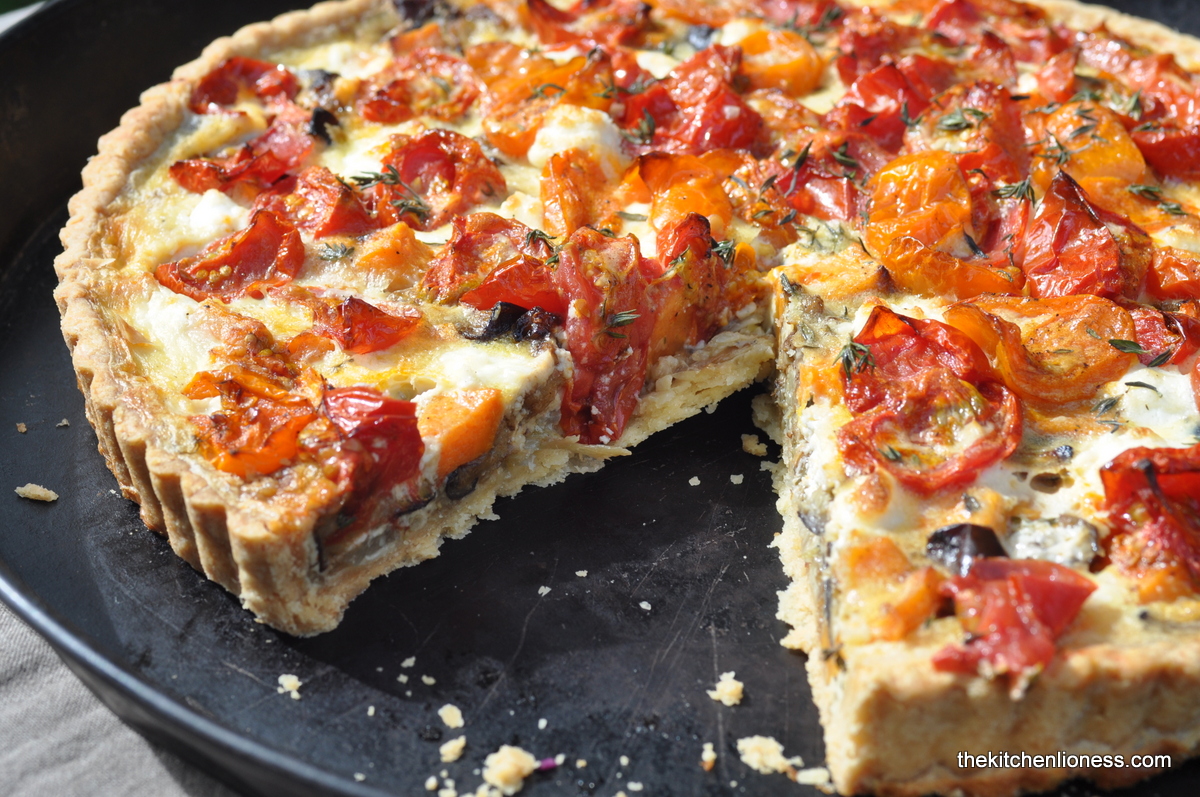 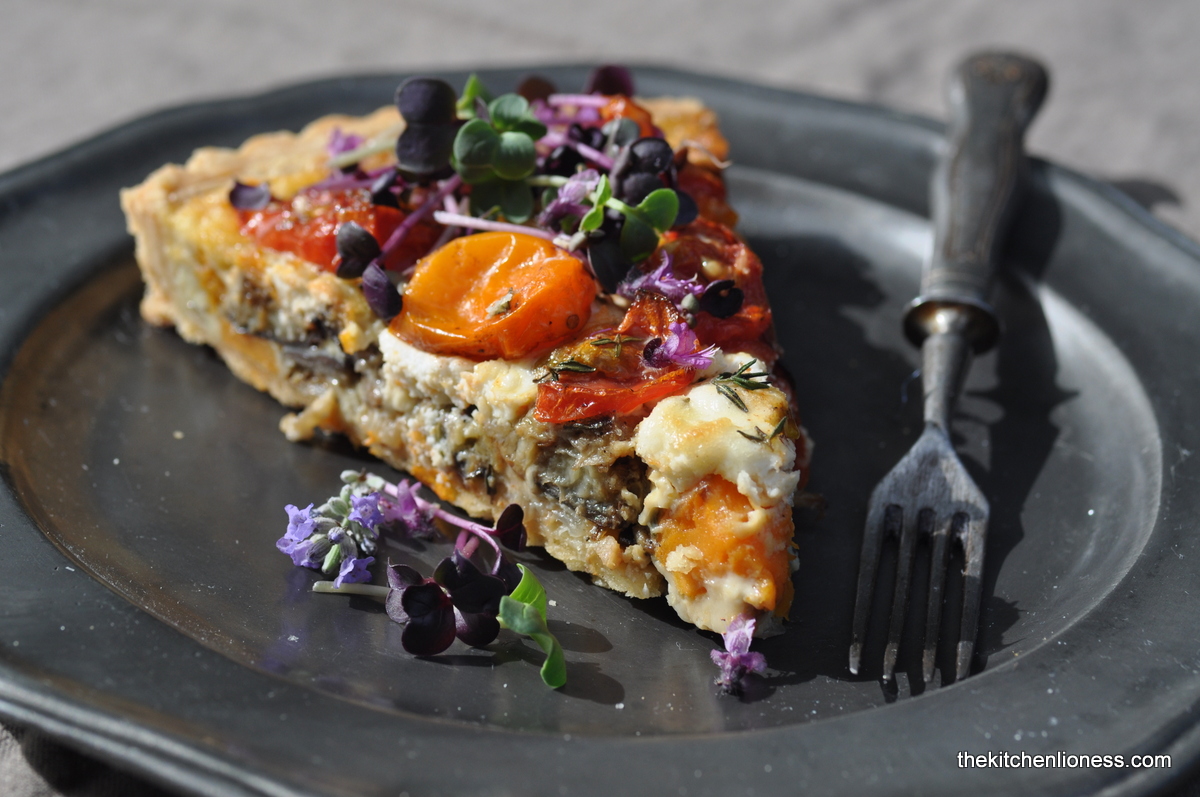 … and a filling with goat´s cheese, cream, eggs and fresh thyme. The recipe is easily adaptable to different vegetables according to season (leeks, aubergines, broccoli, mushrooms) and you can keep or omit the cheese if you want – I would not though. 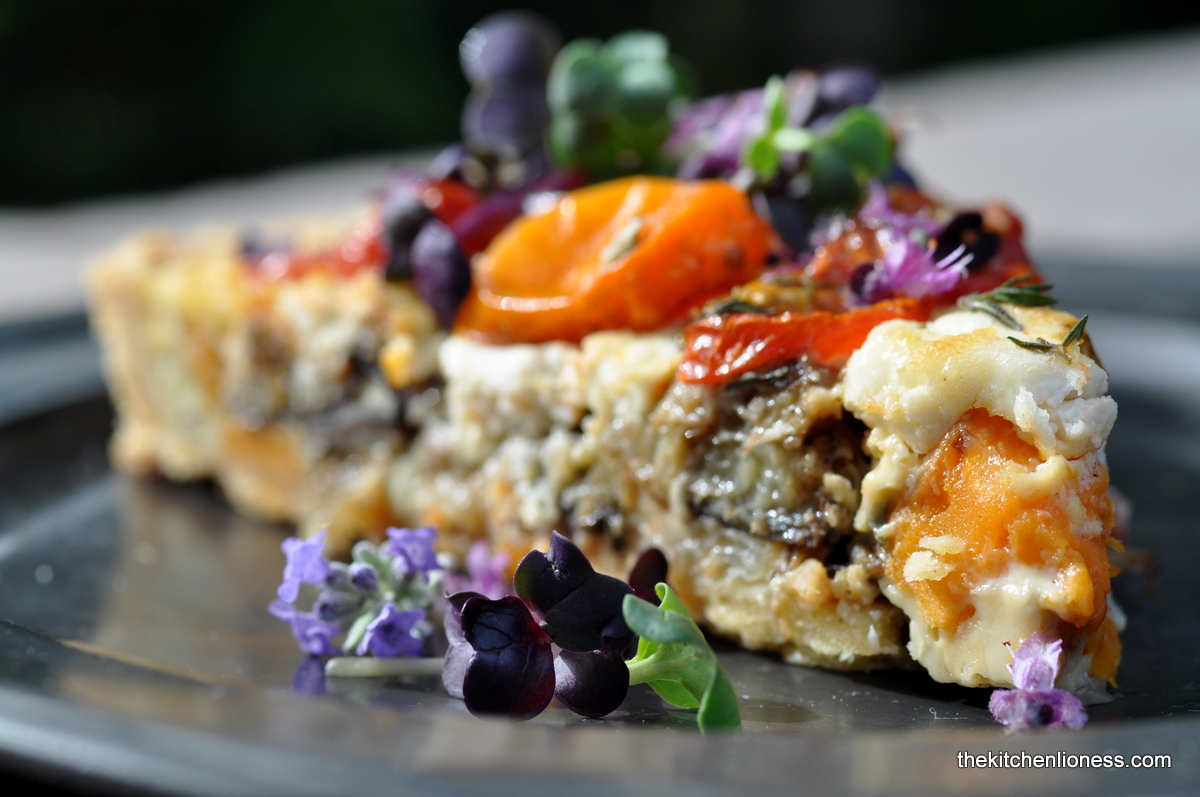 Then finally the wait was over and the long awaited cookbook arrived - onto my first recipe from the NOPI cookbook, the utterly delightful Corn Cakes with Feta - as suggested by Ottolenghi for that "restaurant look" I used the corn husks (rather than baking parchment) to line the muffin tins. They look lovely, like little bamboo baskets and are filled with lots of incredibly wonderful ingredients such as fresh corn, banana shallots, garlic, fennel seeds, ground cumin, celery seeds, tarragon leaves, good unsalted butter, farm fresh eggs, a bit of flour, Greek feta (you could also use a Dolcelatte here instead of the feta) sea salt and a rather good grinding of black pepper. 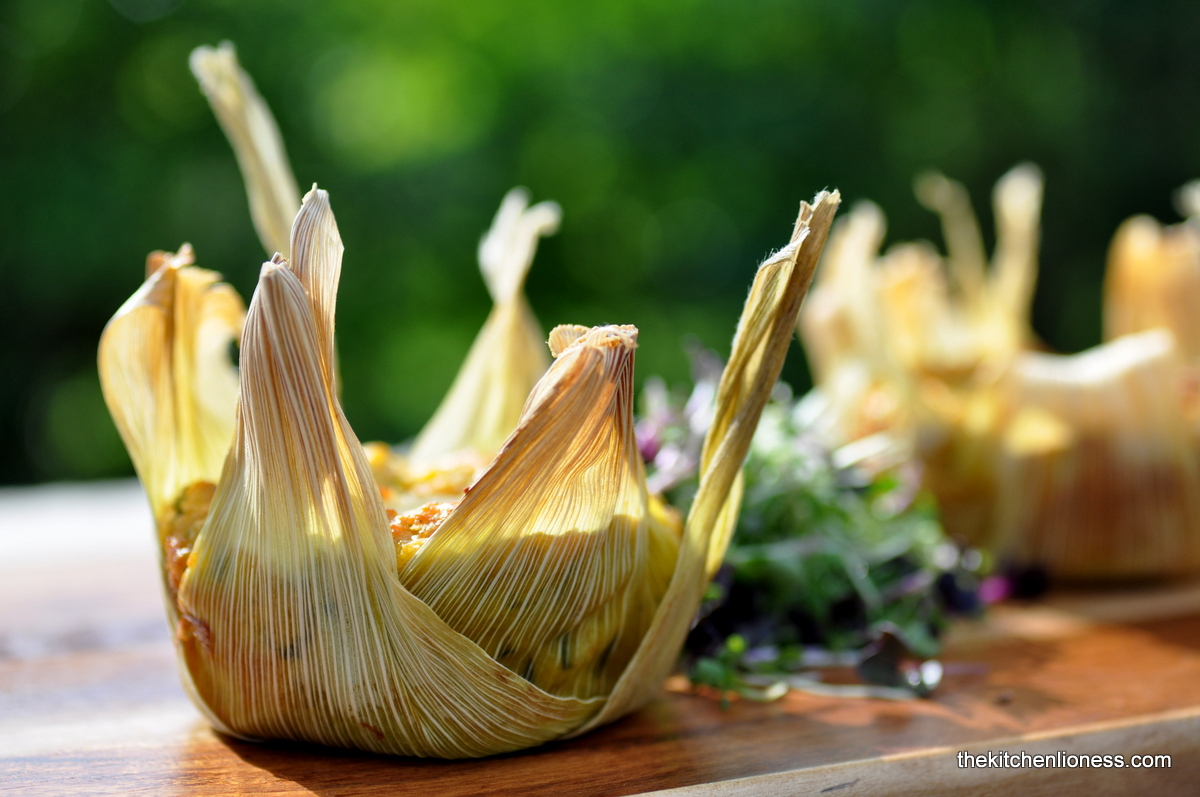 My second NOPI recipe was the very seasonal and colorful Butternut Squash with Ginger Tomatoes and Lime Yogurt. This is one of the most delicious salads that I have ever eaten. My kind of soul food, my kind of addiction. 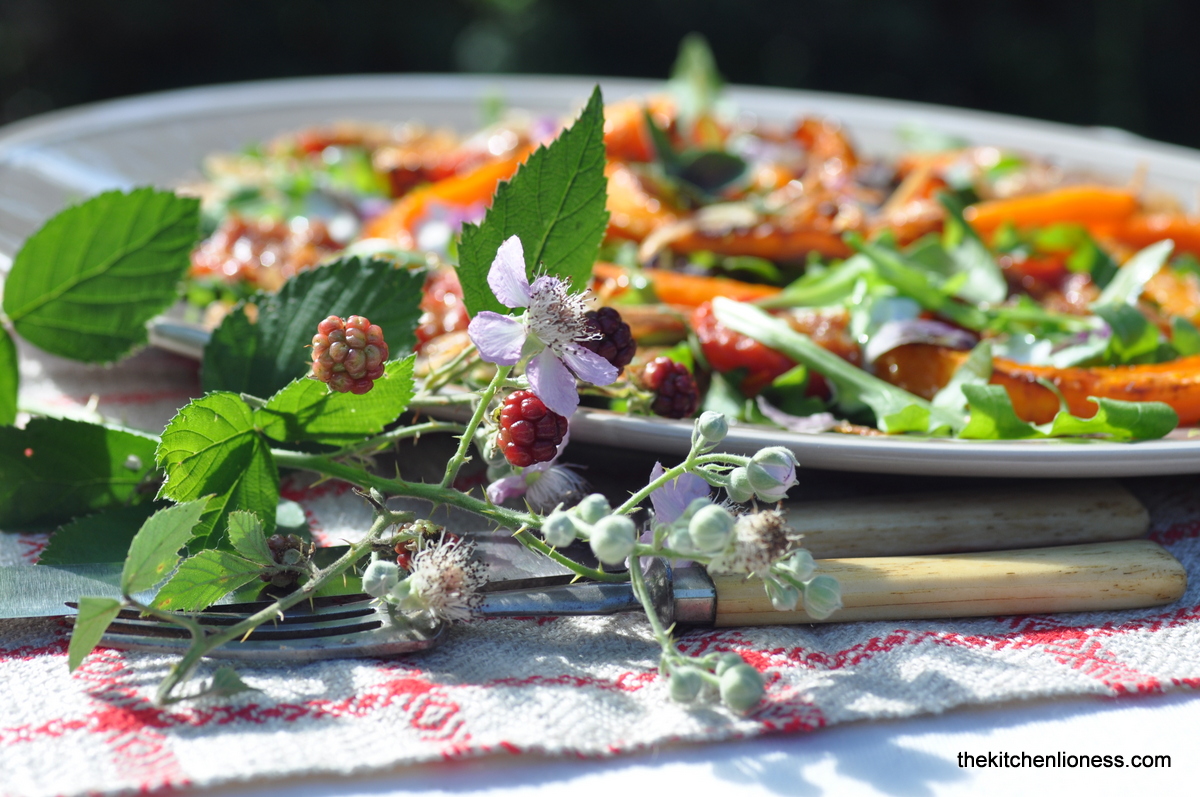 With roasted wedges of butternut squash, and plum tomatoes that get roasted for a two hours (!) with fresh ginger, red chilli, garlic cloves, and dark muscovado sugar and a cooling drizzle of Greek yogurt boldly flavored with ground cardamom, lime zest and juice as well as a finish of fried banana shallots, it is impossible to resist! 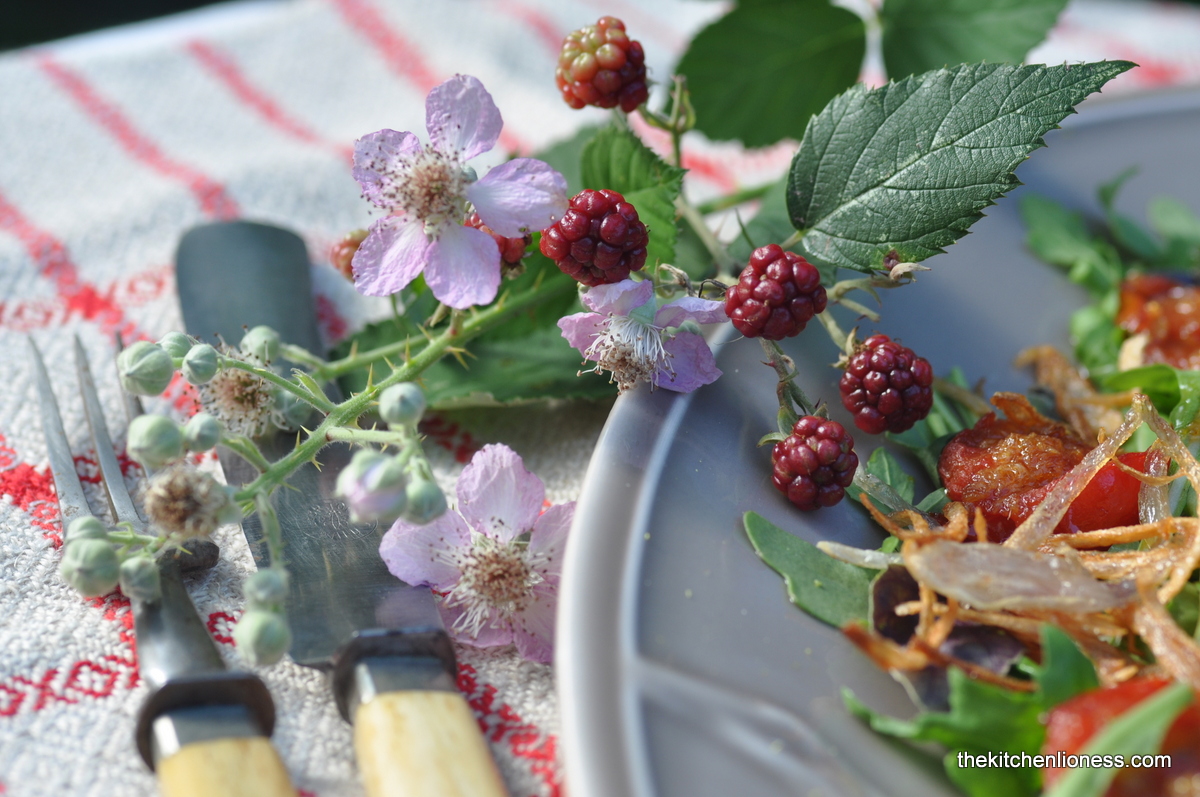 My third NOPI recipe the Celeriac Puree with spiced Cauliflower and fried Egg was simply amazing. The puree works well on its own as an alternative to hummus, but, combined with the other elements, makes a substantial starter or even a meal in itself if served with warm, crusty bread or white pita. 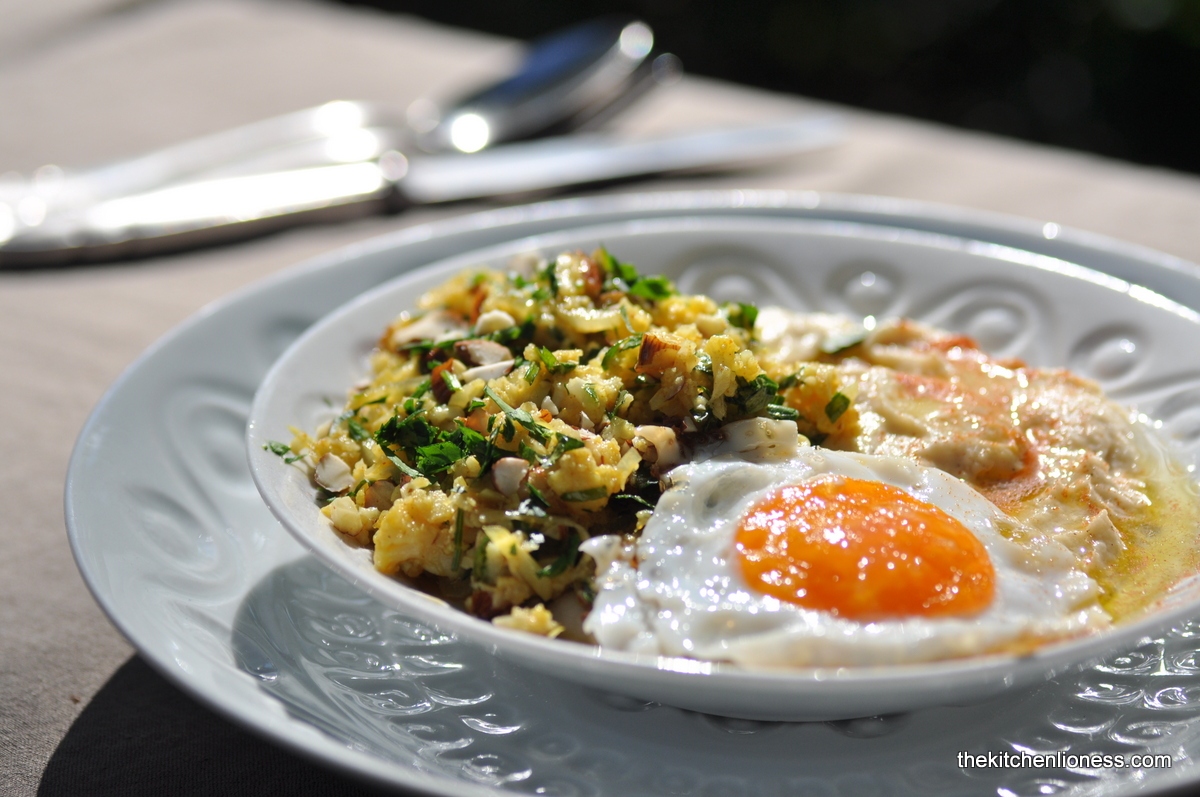 For the Spiced Cauliflower topping that will forever spoil you taste buds, you will need a good olive oil, a large onion, three garlic cloves, my current spice obsession „ ras el hanout“ which is a spice mix from North Africa (the name is Arabic for "head of the shop"  and implies a mixture of the best spices the seller has to offer), a coarsely grated cauliflower (a new technique for me),  finely diced preserved lemon, toasted and chopped almonds, and lots of fresh Italian parsley. This dish is a true revelation! 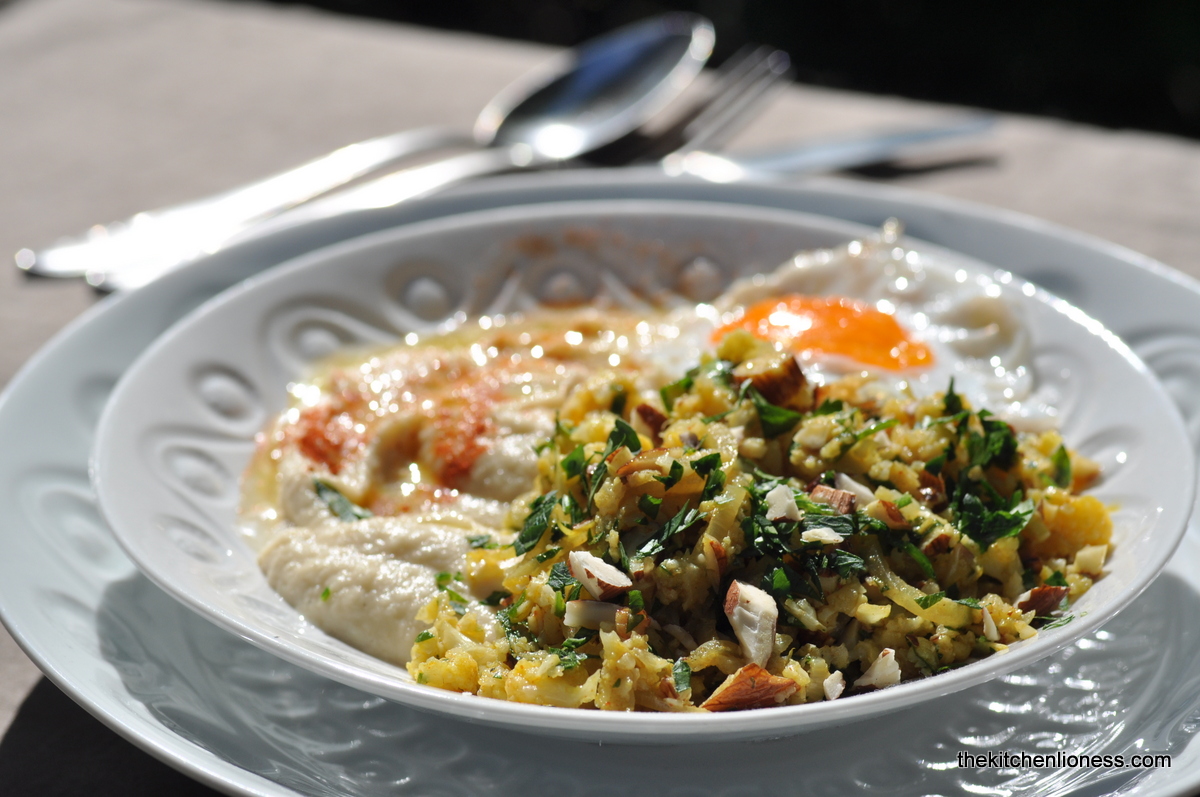 My fourth recipe from the NOPI book was Pearl barley risotto with watercress, courgettes and pecorino – Ottolenghi comments this lovely green dish with the following remark „Risotto made with pearl barley has a bite and texture that work very well with this smooth, leafy puree“. 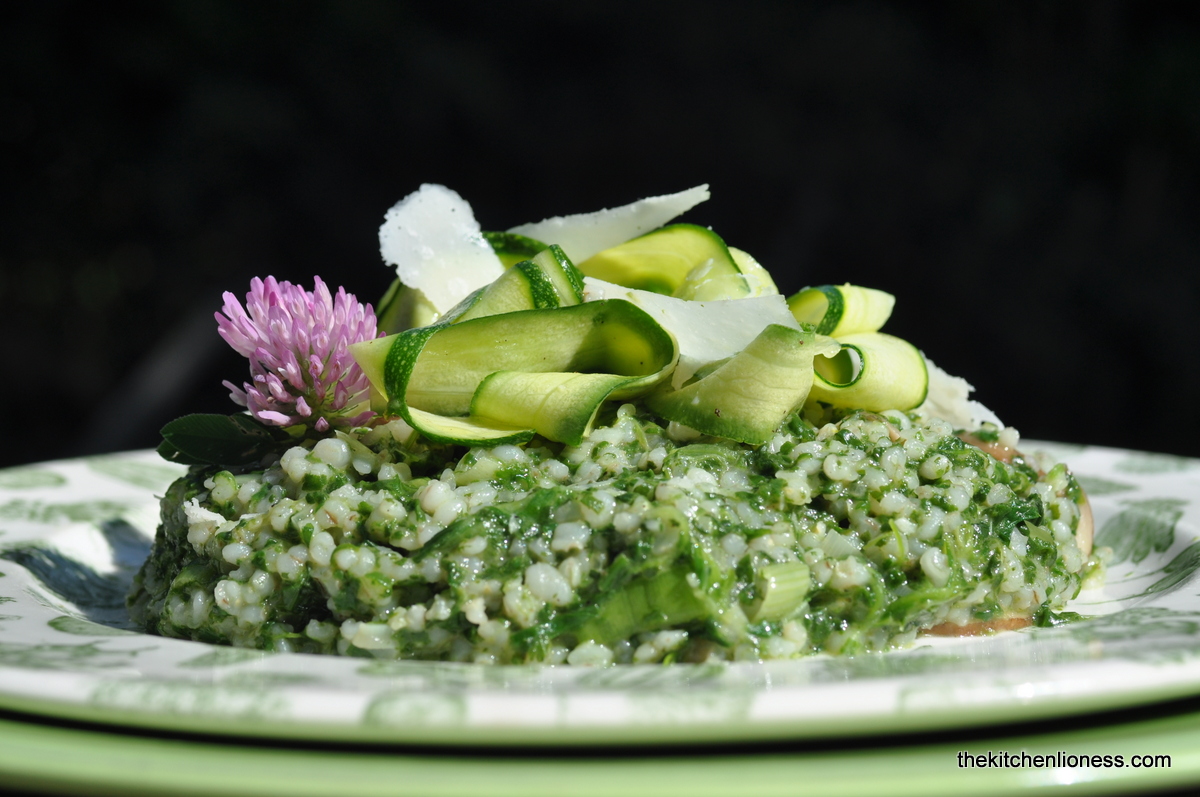 First cook the pearl barley, then make the green puree with watercress and fresh spinach. Fry some portobello mushrooms and some leeks and make a side salad of asparagus ribbons (or courgettes as the asparagus is not in season anymore) and shaved Pecorino Romano. Then serve a dollop of the incredibly green pearl barley risotto and top the dish off with the delightfully tangy salad that you should prepare just before serving so it keeps its crunch - which is a nice contrast to the creamy risotto. 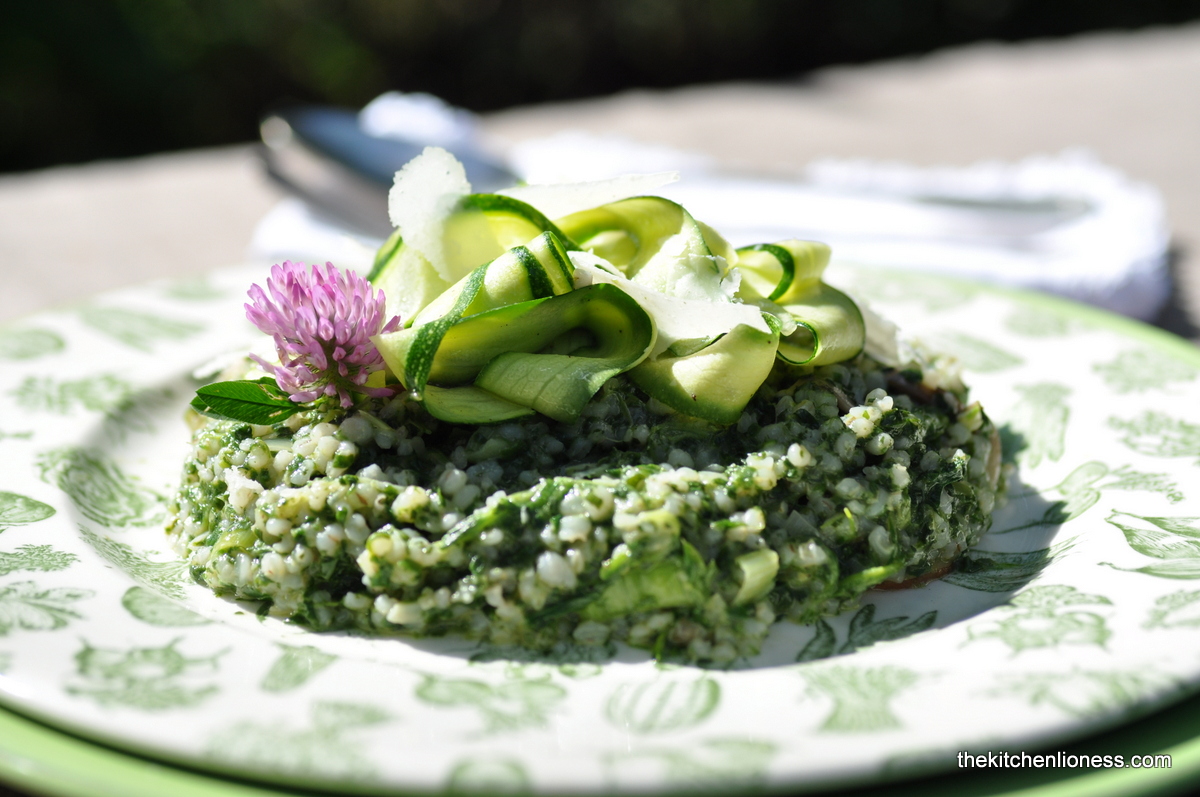 And last but not least, Savory Sesame and Fennel Cookies (Ka´ach Bilmach) from "Jerusalem, A Cookbook", by Yotam Ottolenghi and Sami Tamimi. 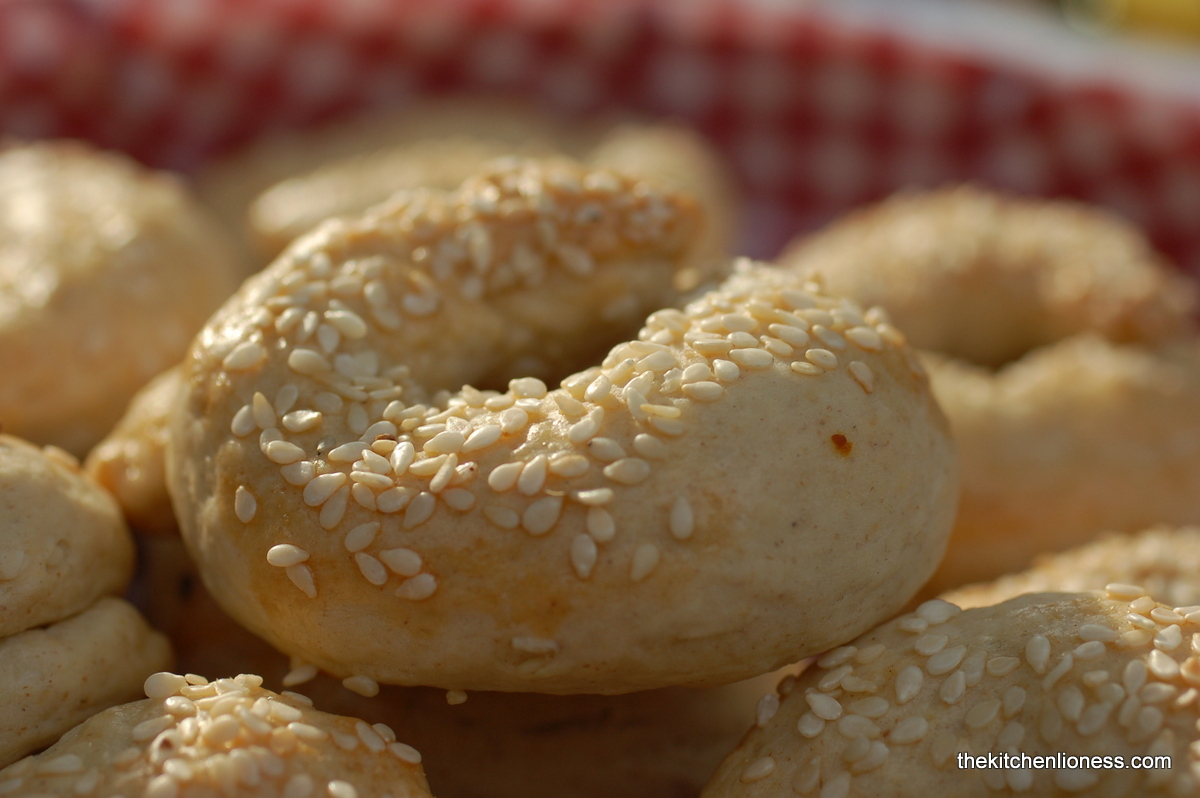 Ottolenghi recipes open up a whole new world of flavors and combinations and textures and spices that you will not encounter anywhere else. Once you have gotten over the "involved part" of his recipes and set aside enough time for the shopping, prep work, and the cooking and when you keep in mind that this is NOT an everyday kind of cuisine, and once you have gotten into the rythm of his recipes, you are very likely to fall head over heels for his cuisine.

Now I have another problem - I need to move to a place with more spice racks AND book shelves...And although I still love my friends cooking, there is another addiction that I indulge in these days – I am definitely in an Ottolenghi state of mind!