These traditional 'Swiss Chocolate Spice Cookies' are very popular for Christmastime and very simple to make. Typically known as 'Basler Brunsli' or 'Bruns de Bâle',  they are a dark chocolate cookie, made with a rather coarse looking dough that includes eggwhites, chocolate, sugar and almonds.

Although the Brunsli are produced throughout Switzerland, they are always associated with the city of Basel and were initially baked there not only at Christmas, but also for special occasions such as weddings, hence their name 'Basler Brunsli'. It is commonly accepted that the first known recipe for Brunsli was published in 1750 in a cookbook called 'Das süsse Basel' (Sweets from Basel), but it seems that the Brunsli cookie itself dates back all the way to the year 1725, when it was first mentioned in a publication in Winterthur (a city in the canton of Zürich in northern Switzerland) -in any case, there is a long tradition of serving 'Brunsli' cookies in Switzerland. 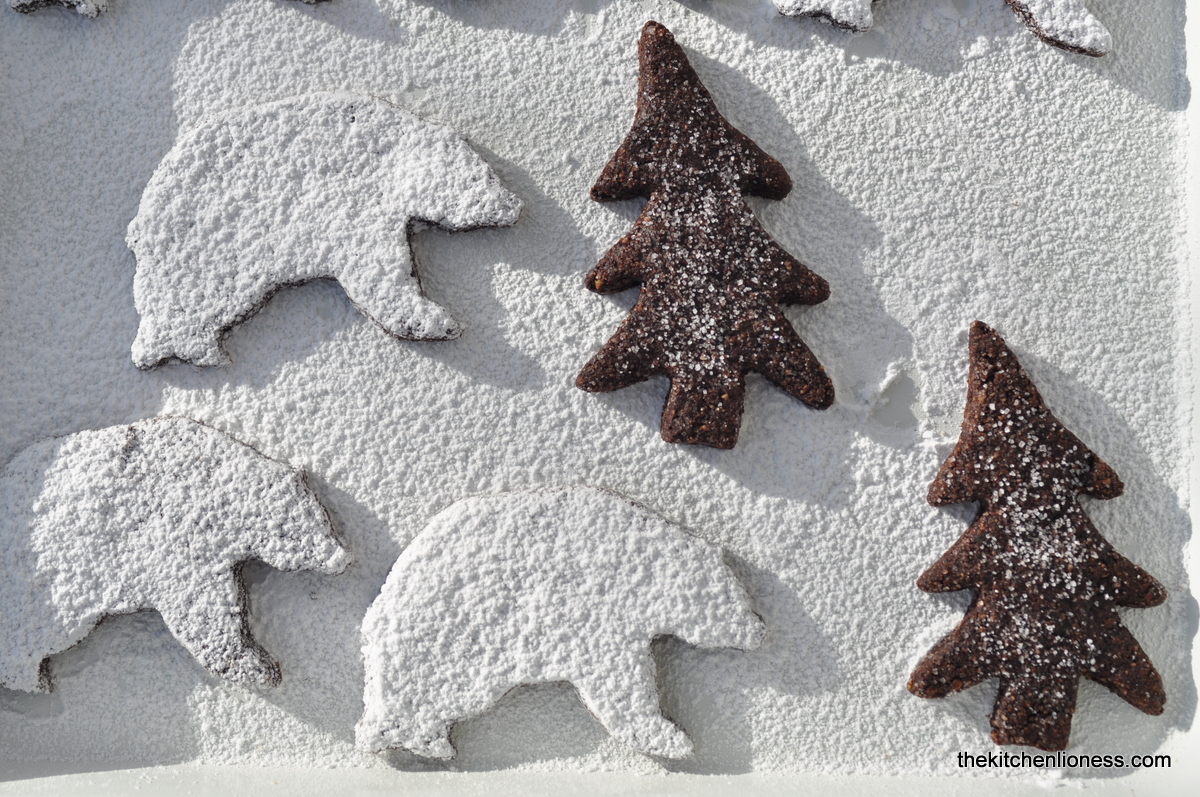 There doesn’t seem to be one standard Brunsli recipe. Historically, the most luxurious and expensive part of the cookie was the ground nuts. It was only during lean times that the nuts were replaced with flour. There is debate over which nuts to use, whether almonds, hazelnuts, or even walnuts. I prefer all natural almonds. Some recipes call for grated or melted chocolate, while others depend on cocoa, and some recipes call for both, my recipe calls for both dark grated chocolate as well as a high quality cocoa powder. As far as the spices go, I like to make my Brunsli with only cinnamon, however, some recipes call for cinnamon and cloves or even espresso. Some add a bit of grated orange zest to the mix which is aslo nice if you like the flavor combination of orange and chocolate. Finally, some recipes suggest the cookies are baked low in the oven and some forego baking completely and just leave them out to dry. 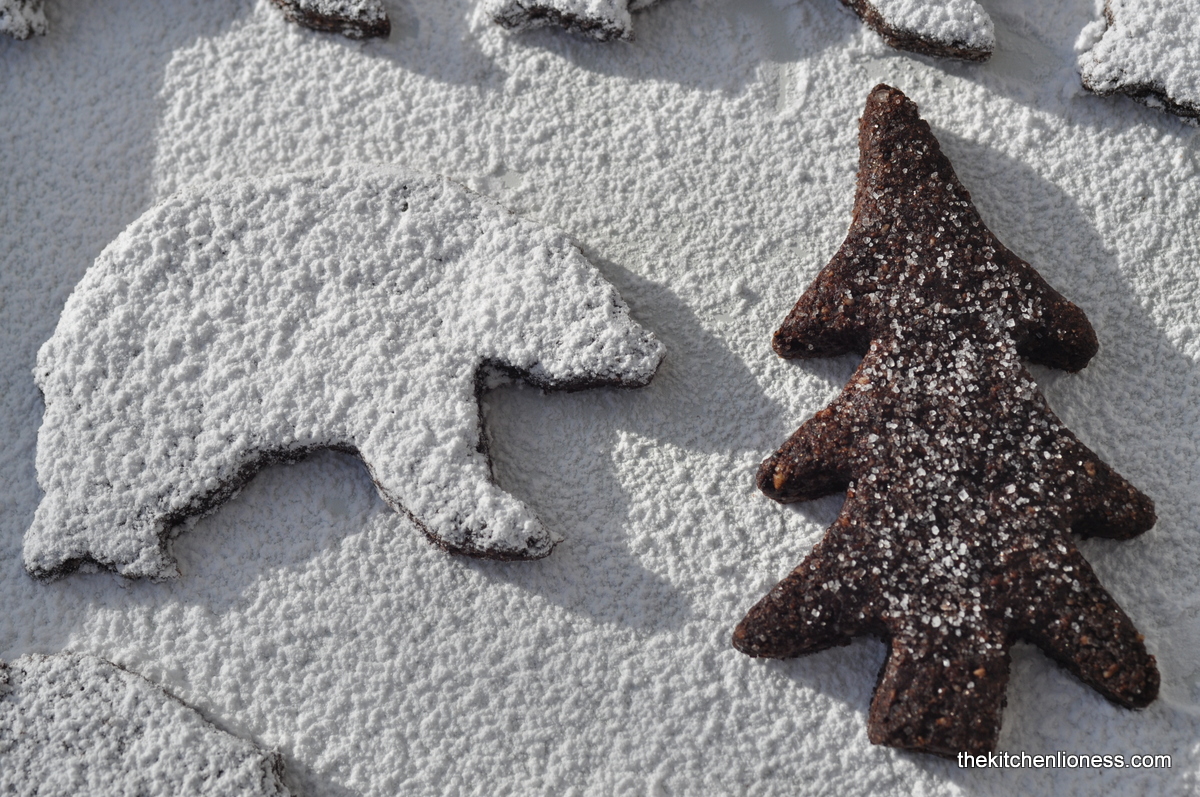 There is also a much debated question as to the shape of these cookies – which I find rather interesting. It is ofen said that while in the past the Brunsli were made using only wooden molds (much like the ones used to make gingerbread as menitioned in my previous post HERE) with motives including deer, swans, houses, musical instruments such as violins, fish, flower arrangements and farmers - starting around 1800 the cookies were made using metall cookie cutters of various shapes . Btw. the first mention of a cookie cutter was apparently made in the year 1766 in Styria (a state located in the southeast of Austria).

Personally, I like the sound and shape of 'Brunsli Bears', so Brunsli Bears it is this season. The cutters were given to me years ago by a very good friend of mine who brought them back from Canada. 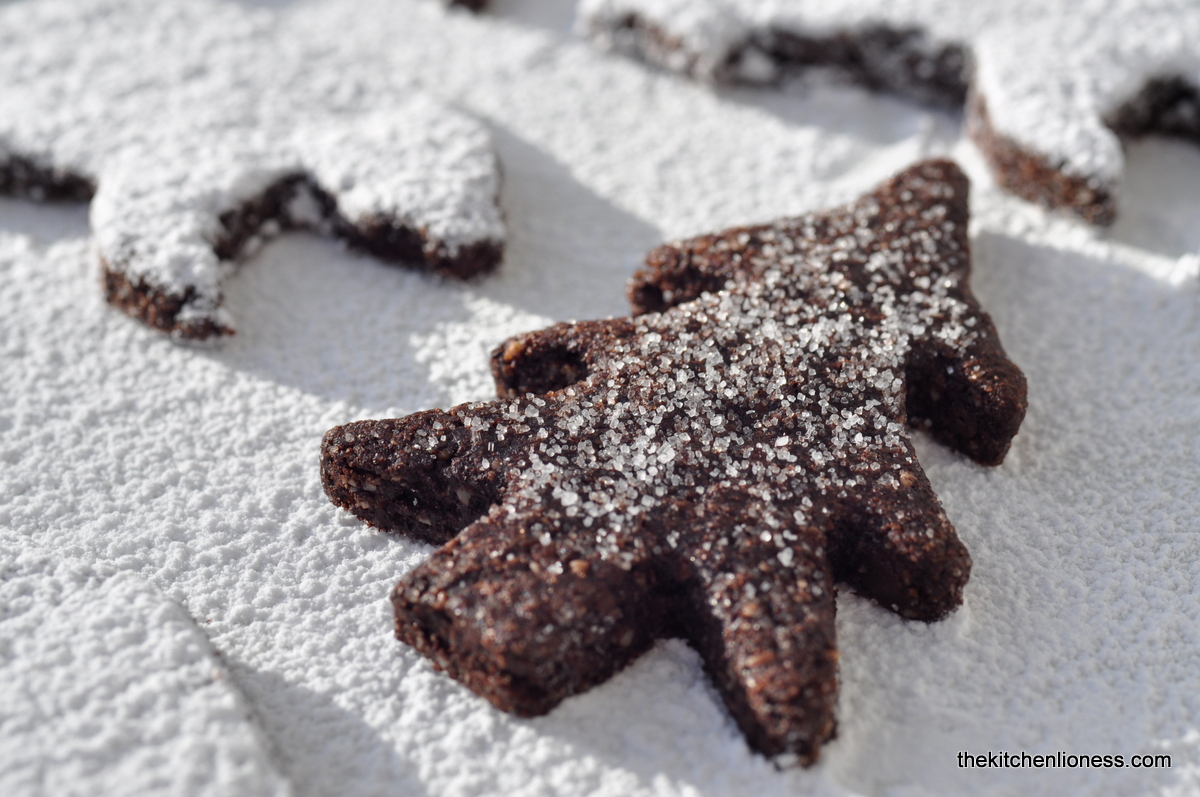 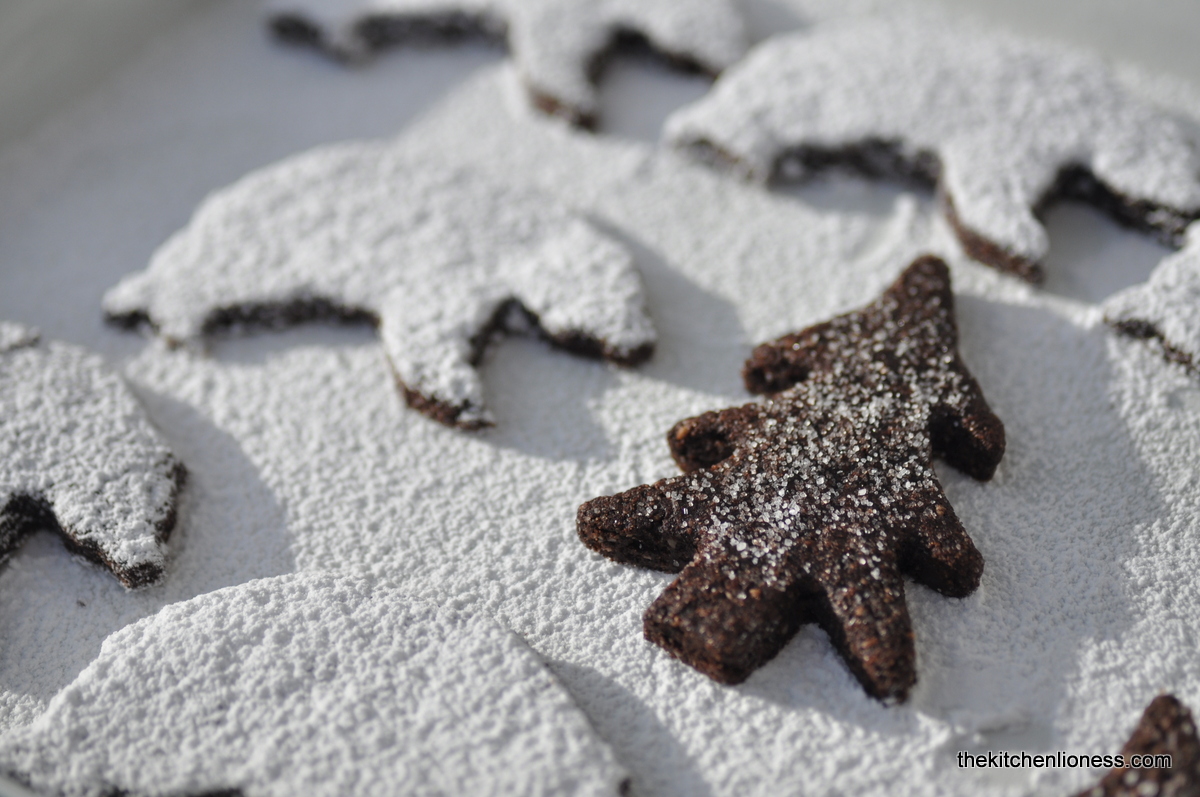 Anyone from Switzerland will tell you that the 'Basler Brunsli' should only be eaten around Christmas but, honestly, we enjoy these chewy, brownie-like cookies year-round. Statistically, the Brunsli rank among the three most popular cookies in Switzerland, the other two being Butter Cookies (Mailänderli) and Cinnamon Stars (Zimtsterne). 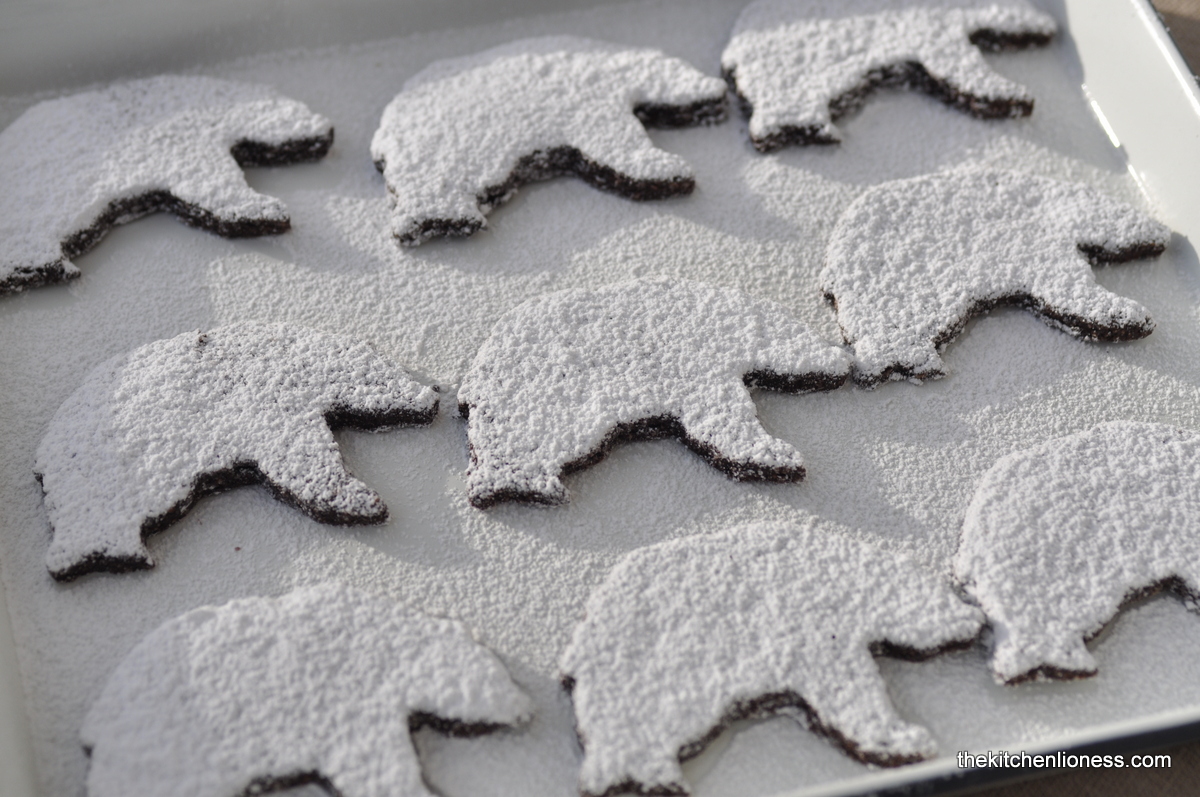 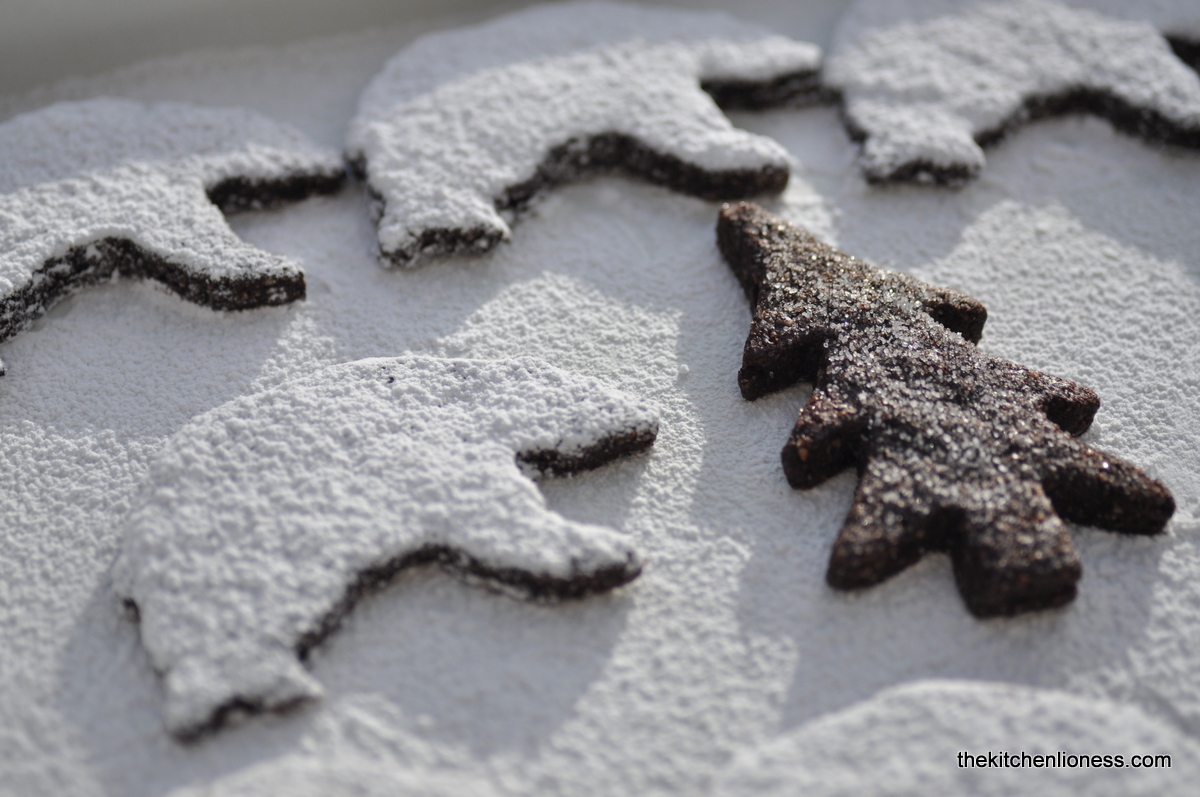 The dough can also be frozen (either when shaped into a ball or cut into cookie shapes) for up to a month. If you bake from frozen, just add another minute or two to the cooking time.