We have been enjoying white asparagus (weißer Spargel) for a few weeks now. In Germany, white asparagus is harvested from about mid-April to the end of June. Traditionally season’s end is June 24, St. John the Baptist Day – so it is high time for yet another white asparagus post.

It actually takes 3 years for an asparagus plant to produce its first tip. To produce white asparagus, soil is piled up into knee-high banks, white asparagus grows entirely surrounded by earth, which protects the slender stalks from sunlight exposure and keeps them from turning green. This also affects the subtle flavor of it. The popular vegetable grows best in sandy soil and is cultivated in almost all federal states as well as in neighboring countries such as the Netherlands, Belgium and Spain. 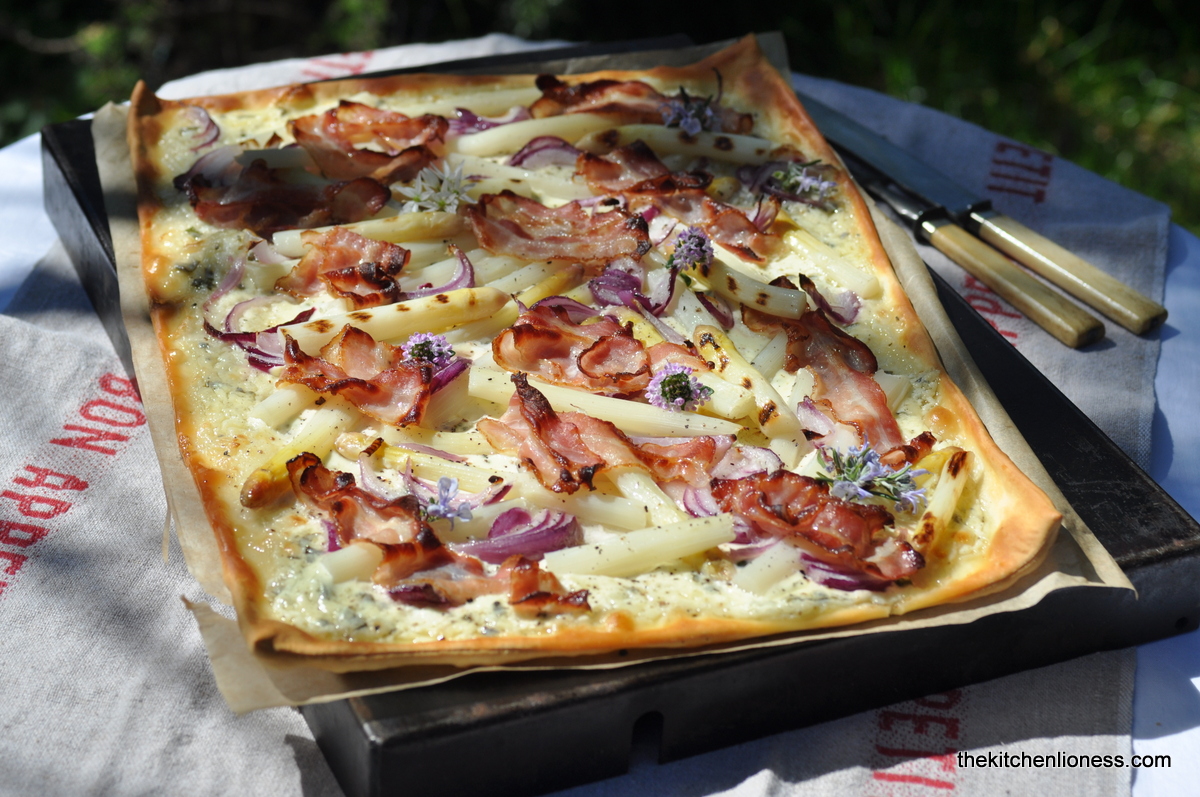 During asparagus season (Spargelzeit), the average German enjoys the tender stalks at least once a day. This adds up to a national total of over 70,000 tons of asparagus consumed per year.

The vegetable’s popularity may in part be rooted in its long history as a so-called luxury vegetable. Going back as far as 2000 BCE, the prized vegetable was cultivated by the Ancient Egyptians, the Greeks and the Romans. Throughout the rule of King Louis XIV, it gained in popularity and was reserved to the tables of the courts. The first document that mentions the cultivation of this vegetable in the region around the city of Stuttgart, Germany dates to the 1686. 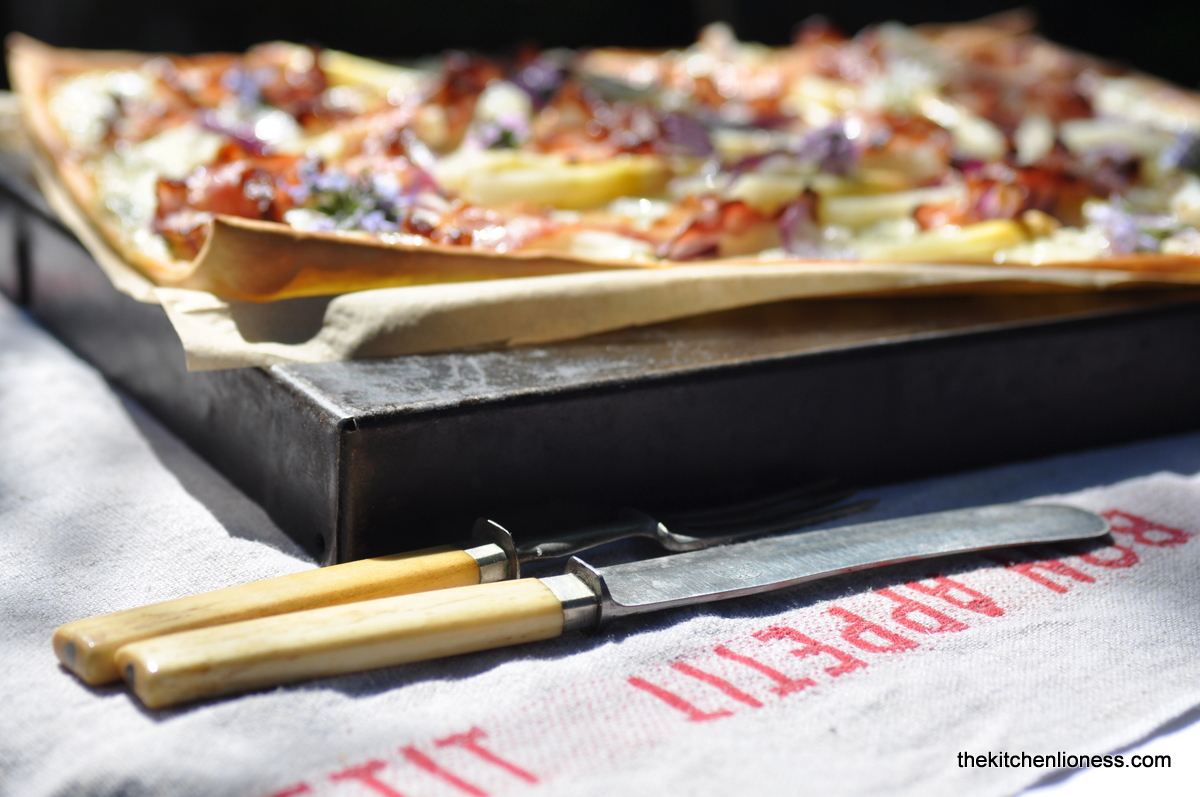 Flammekueche (Alsatian), Tarte Flambée (French) or Flammkuchen (German) is a speciality of the region of Alsace. Traditionally, it is composed of bread dough rolled out in the shape of a rectangle or oval, which is covered with fromage blanc or crème fraîche, thin-sliced onions and lardons (lardons are not normally smoked, they are made from pork that has been cured with salt).

Tarte Flambée: the name translates to “pie baked in the flames” or “cake licked by the flames” but contrary to what the direct translation would suggest, tarte flambée is not flambéed but is cooked in a wood-fire oven. 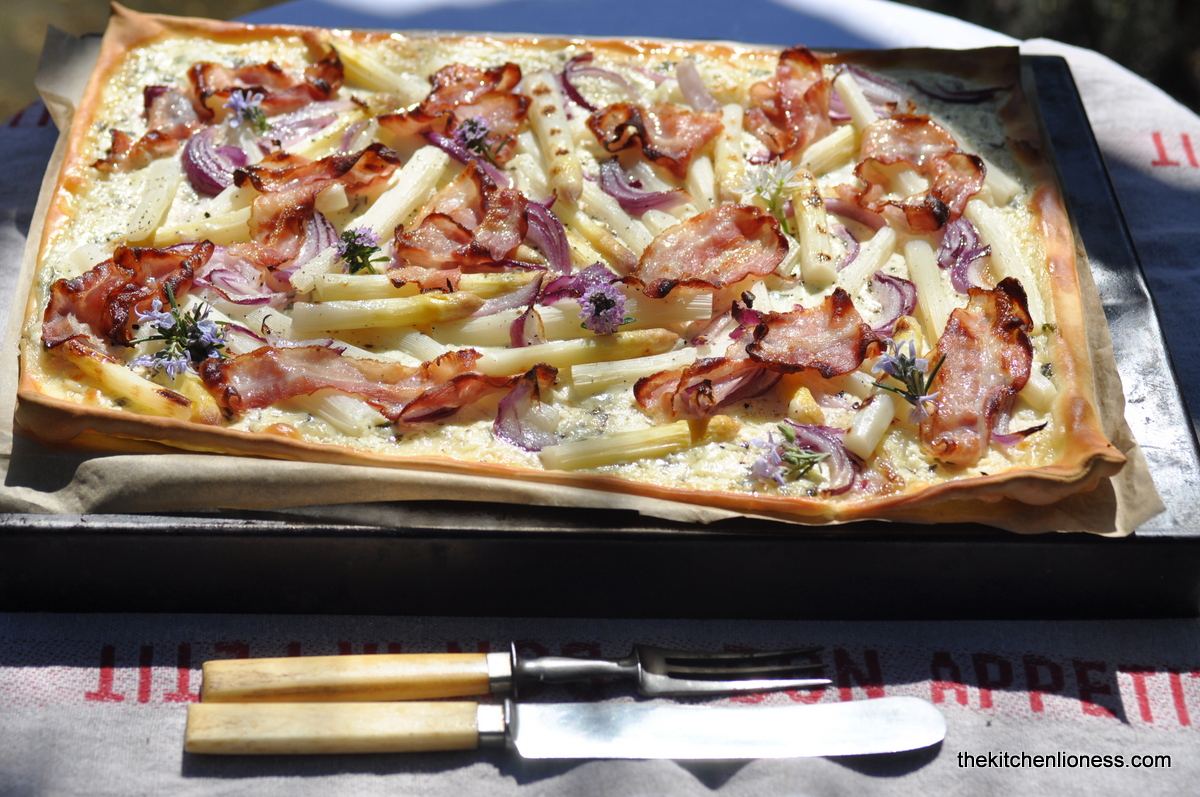 Tarte Flambée is also known as a “plat du pauvre” (a dish of the poor), a dish that was created by farmers and that was traditionally made once a week on bread-baking day in a blazing wood oven. The farmers used it to test the heat of their ovens. At the peak of its temperature, the oven would also have the ideal conditions in which to bake a Tarte Flambée, for that purpose, the embers would be pushed aside to make room for the Tarte in the middle of the oven, and the intense heat would bake it in 1 or 2 minutes. The crust that forms the border of the Tarte Flambée would be nearly burned by the flames, the result looks not unlike a thin pizza. For those of us who like the taste of Tarte Flambée but do not own a wood oven, the recipe works equally well in a very hot oven and with less traditional toppings.

Tartes Flambées were originally a homemade dish which did not make its urban restaurant debut until the "pizza craze" of the 1960s. 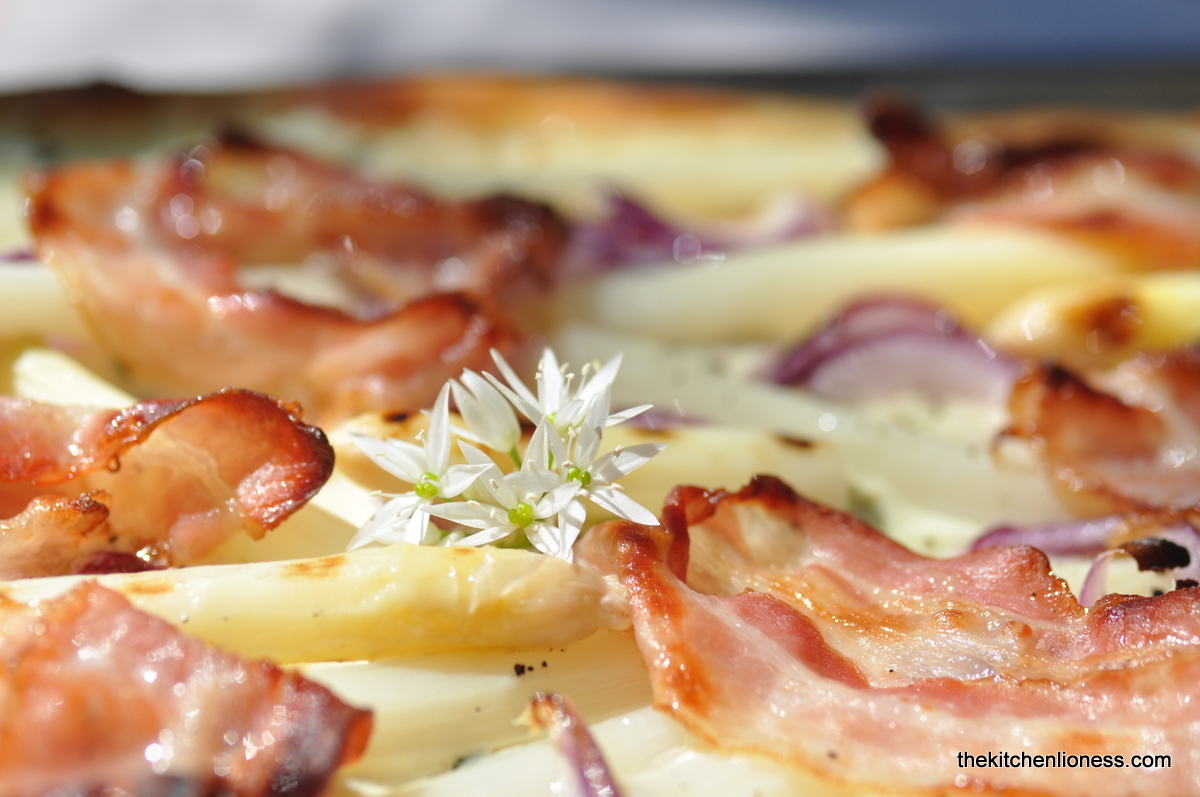 While we eat asparagus in many different ways, served with melted butter and new harvest boiled potatoes, with ham or with hollandaise sauce, this year, we are very partial to my Tarte Flambée with White Asparagus & Bacon (Flammkuchen mit weißem Spargel, roten Zwiebeln & Bacon). In addition to the herbed crème fraiche, I like to use thinly sliced red onion that I peel, mix with some olive oil and salt while preparing the remaining ingredients. 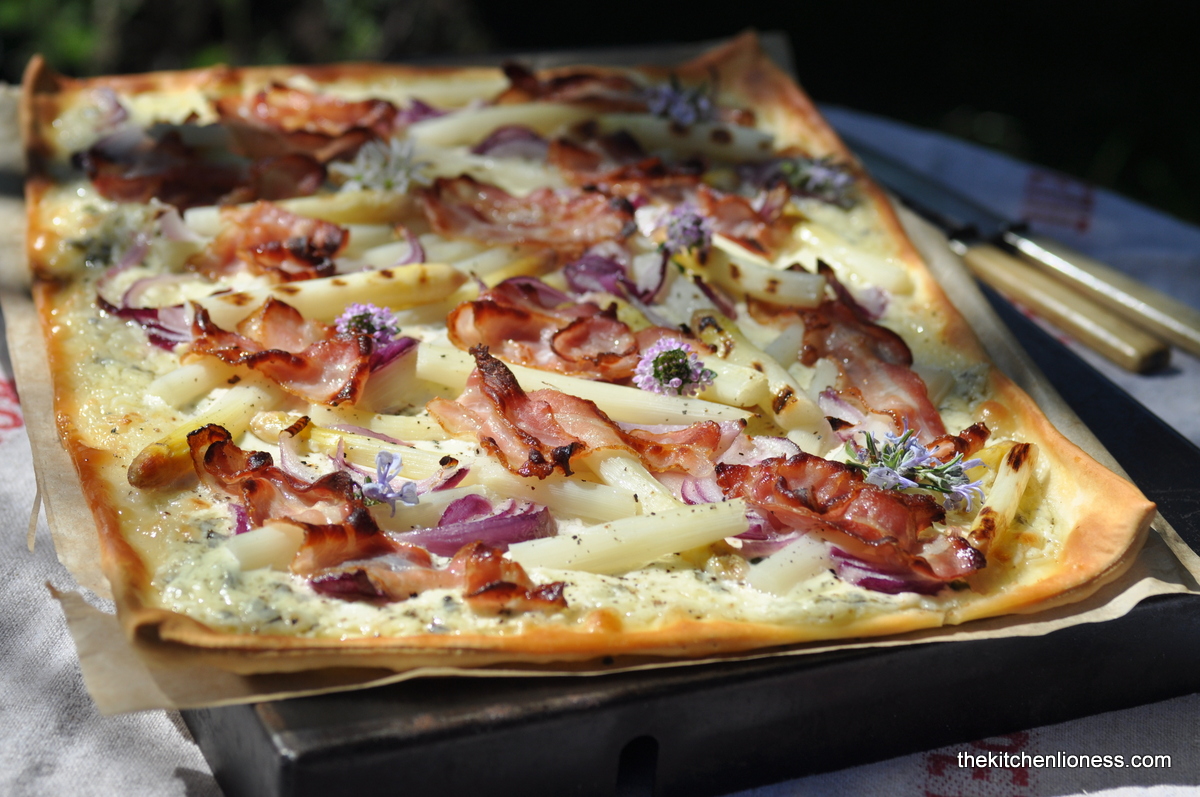 Then there is the asparagus: peel and cook in water seasoned with salt, sugar and some lemon juice. Then drain well and grill shortly in your grill pan (or on the BBQ), then roll out the dough, spread with the prepared crème fraiche, sprinkle with the onions, add your cooked asparagus, top off with some bacon slices and bake until the bacon sizzles. In Alsace, Tarte Flambée is often eaten as a first course, cut into squares, and shared with a large group as part of a larger feast. But it’s also delicious as a simple supper, with green/seasonal salad on the side. 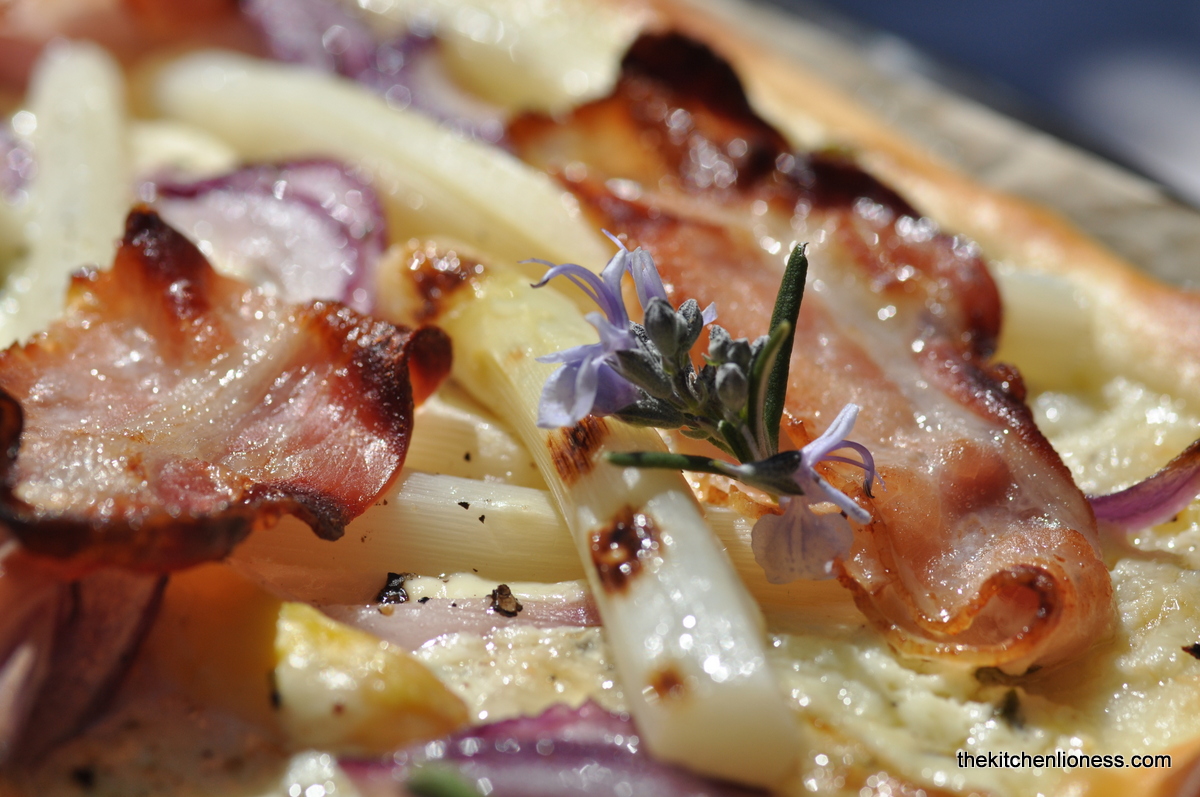