Tuesdays with Dorie - Focaccia with Butternut Squash and Winter Sage


Today´s recipe for the Tuesdays with Julia group is Focaccia. This type of flatbread dates back to Ancient Rome and was originally cooked in the ashes of the fire, "focus" means "hearth" or "fire" in Latin. This classic recipe was contributed by Craig Kominiak, the Executive chef of Ecce Panis Bakery in New York City. Back in Septemer 2012, we already baked his wonderful Whole Wheat Bread. 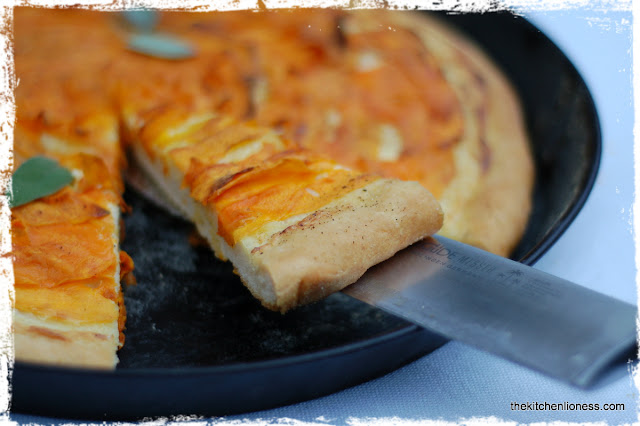 Focaccia, can be described as an Italian olive-oil bread, quite flat and usually round or square-shaped. It has an almost cake-like texture and is often flavored with different olive oils, herbs such as rosemary, thyme, sage, oregano or basil and it can be topped with a variety of different delicious things such as with black or green olives, olive tapenade, or can even be filled with ham or cheese, or be used as a "dipping bread" or as a "sandwich bread". You can even make a sweet version of Focaccia (I have tried a terrific recipe for a dried-fruit focaccia before) and add cherries, golden raisins, grapes and walnuts, to name but a few examples.

It is fun to bake your own Focaccia and experiment with adding various toppings and fillings. Last Monday, I posted a Focaccia with thinly sliced potatoes, crème fraîche, fresh rosemary and some blueberry syrup. So I took a cue from that delicious recipe and topped today´s Focaccia with butternut squash and sage. 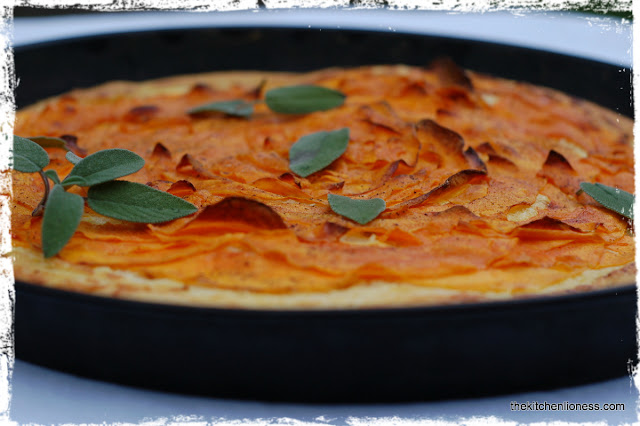 Craig Kominiak's recipe makes three Focaccias. I decided to divide the recipe and make two large Focaccias.  The dough is easy enough to make with the usual ingredients of yeast, water, olive oil, flour and salt. After two rises, the dough needs a good 24 to 36 hours "cold rest" in the refrigerator.

Since last week´s Focaccia was rectangular, I baked today´s  Focaccia in a large round vintage pie plate that I had dusted with cornmeal prior to baking. For the topping I chose thinly sliced butternut squash on top of a bit of crème fraîche, then added a bit of freshly ground black pepper, French sea salt, some mild Italian olive oil and a few leaves of winter sage. 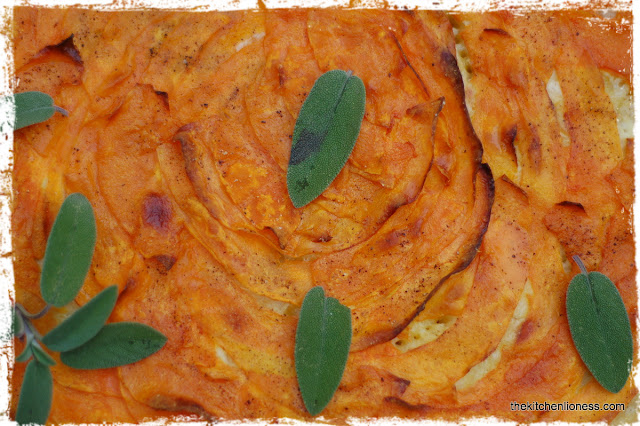 This simple, rustic bread makes a great partner to salads and antipasti and it is a delicious accompaniment to Italian food. It is also a wonderful idea to cut it into generous wedges and serve with olive oil and balsamic vinegar for dipping or just eat it plain.

This Focaccia recipe is easy to make and easy to adapt. Try adding different herbs and toppings.

To see the other Focaccias as prepared by all the other enthusiastic members of the Tuesday with Dorie group, please do click here.

The recipe can be found at Sharmini´s blog – Wondering Through. "Thank you for hosting today´s recipe, Sharmini"!