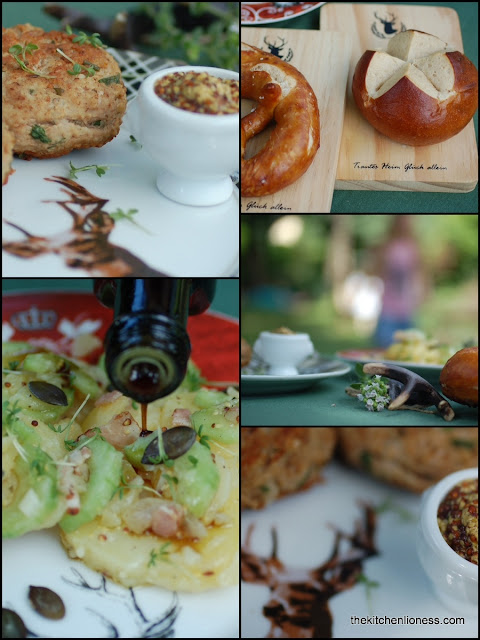 Today I am posting a recipe for an Styrian potato salad. Styria (Steiermark) is a state (Bundesland), located in the southeast of Austria.

When I was a child, we used to spend our summer vacations in Austria - I loved the Austrian mountains, the lakes, the castles, the people and the food. Peolple used a lot of local produce in their recipes. They got cheese from the local cheese maker, fruits and veggies from the local farmers and honey from the neighbour. "Local" or "regional" was a way of life then, not a fad. Be that as it may, I remember the glorious food I ate in Austria vividly and nowadays I regularly prepare Austrian and Bavarian dishes for us. My family thinks they are delicious.

The recipe I chose for today´s post is a wonderful recipe and it is perfect for summer. It contains no heavy mayonnaise but, as is typical for Austrian or Bavarian potato salads, the cooked potatoes get coated with a warm dressing containing a homemade beef broth, onions, bacon and some other delicious ingredients.

As far as the Styrian aspect is concerned, I should add the following. Although the salad is wonderful without a “Styrian touch”, it does add another layer of flavor and makes it all the more special, so, just before serving, you can add a few drops of the famous Styrian pumpkin seed oil ("Kürbiskernöl"), toasted pumpkin seeds ("Kürbiskerne") and cress (or omit the cress and add flat leafed parsley).

Pumpkin seed oil is derived from cold-pressing roasted, hulled seeds of the certain varieties of pumpkins, most commonly the Styrian pumpkin. It is a specialty of Styria, a region that encompasses southeast Austria and nearby regions of Slovenia, Croatia and Hungary. Cultivation of the Styrian pumpkin began in the late 1600s. Pumpkin seed oil has a rich green color and a nutty flavor and makes an excellent addition to the traditional Styrian salad dressings.

You can pair the potato salad with rustic meatballs ("Fleischpflanzerl"), schnitzel, chicken cutlets or on its own with pretzel ("Bretzel") or a country style loaf of  bread ("Landbrot").

Ingredients for the Potato Salad

To add the “Styrian touch” (optional)

1. Boil potatoes in salted water until tender when pierced with a paring knife, 20 to 25 minutes (depending on the size of the potatoes). Transfer to a cutting board. Let cool. Peel and then slice thinly and set aside.
2. Peel cucumber(s), halve and seed with a small spoon. Then slice thinly, transfer to a medium bowl. Mix with two pinches of sea salt so that the salt can draw out the moisture from the cukes.
3. Roast the pumpkin seeds (if using) in a dry non-stick pan until they become fragrant. Set aside.
4. Cook the bacon in a heavy skillet over moderate heat, stirring occasionally, until golden and crisp, about 8 minutes. Add the chopped onions to the bacon and cook for three minutes more.
5. To the bacon mix, add the vinegar and the broth, then whisk in the mustard and cook for three minutes on moderately high heat.
6. Then add the sunflower oil to the pan, whisking constantly. You now have a hot dressing.
7. Immediately pour the hot dressing over the cooled and sliced potatoes and mix carefully but well.
8. Drain the cucumber slices and add them to the potato salad. Then add some freshly ground pepper and salt to the salad.
9. Put in the fridge for about two hours. After the two hours adjust seasoning if necessary and add some more pepper and salt to taste..
10. Just before serving, add a few drops of pumpkin seed oil, pumpkin seeds and cress (optional). 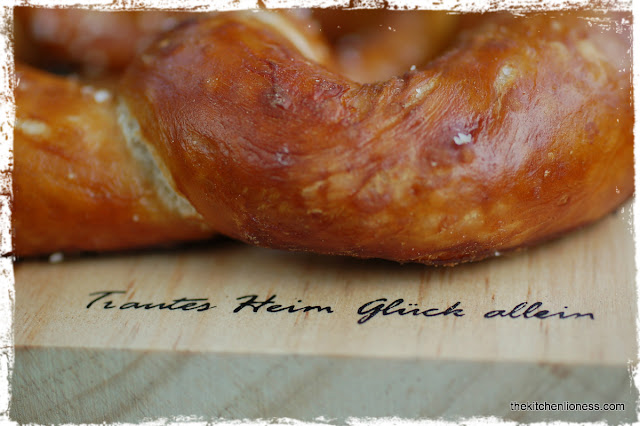