The Müller Cloth Mill (Tuchfabrik Müller) is located in the City of  Euskirchen, North Rhine-Westphalia (Germany). It is part of a growing group of the so-called "Museums of Industry". This delightful Museum provides interesting and unusual insights into the production process of a Cloth Mill by showing fully working machinery and equipment from around 1900.

The Museum opened its door to the public in 2000. The Museum preserves the Cloth Mill's state exactly as it was when it was closed down for business by the owner Kurt Müller in 1961. He simply walked out the door and locked it behind himself.

This industrial Museum is at the heart of the "European Route of Industrial Heritage" and a central stop on the "Wool Route". 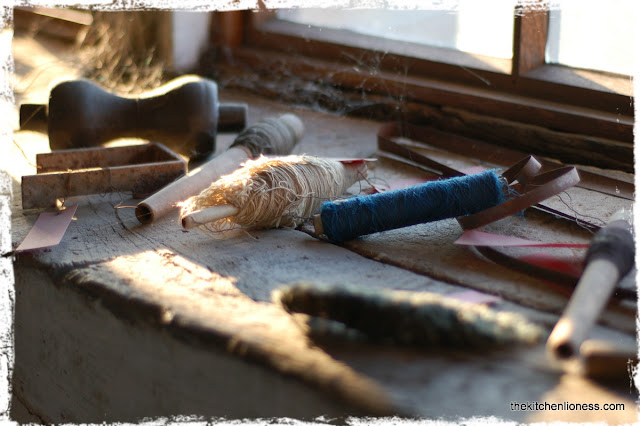 The factory started life as a papermill in 1801. A few decades later things changed quite a bit. In the mid-19th century the building was used to scoure and spin wool and to full the cloth. From 1860 onwards the increasing demand of power supply lead to the installation of a new steam engine, which replaced the old mill wheel.

The building was purchased in 1894 by Ludwig Müller who decided to set up a Cloth Mill. 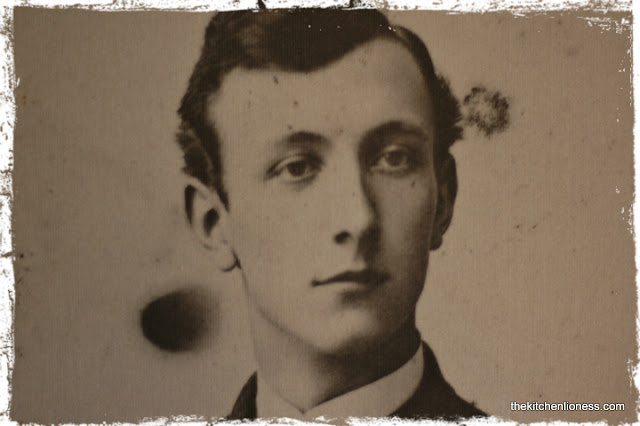 For the first time, the whole process of production was then brought together under one roof. Like most other regional mills at the time, Ludwig Müller offered coarse woollen cloth, "loden" ("Loden") and uniform cloth. The machinery that was purchased around 1900 together with the "new" steam engine that dates back to 1903 set the production on a firm basis.

After Ludwig Müller's death in 1929, his son Kurt Müller led the Cloth Mill. In 1961, it was finally closed down, due to a lack of orders. It is hard to believe, but the equipment was never changed or replaced until the factory was closed. 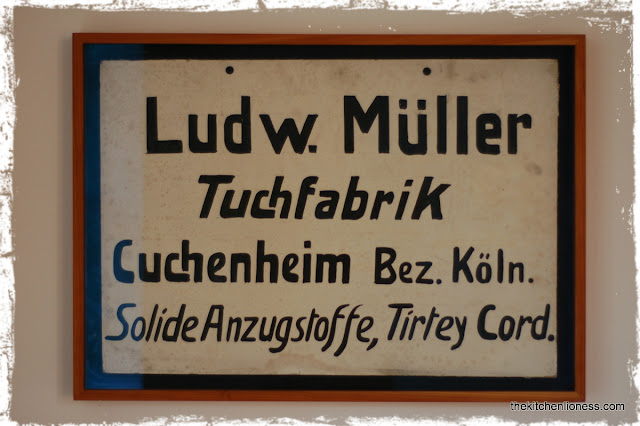 Despite the fact that he had to close down his factory, Kurt Müller had always hoped to start production again one day. However, during the years following the close down, nothing really happened that would have justified re-opening for business. In 1988 the "Rhineland Museum of Industry" ("Rheinisches Industriemuseum") seized the opportunity and took over a completely fitted factory nearly untouched since the last day of work. 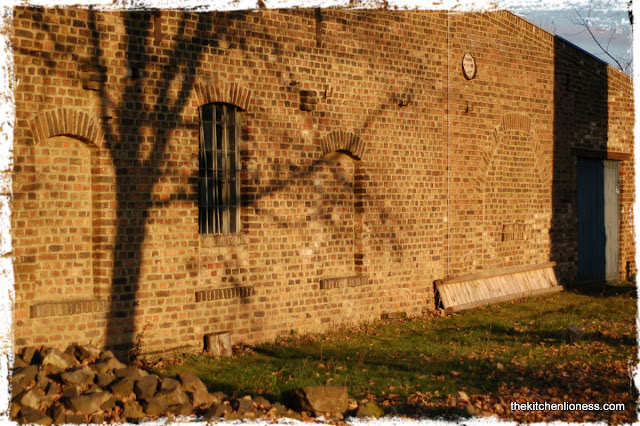 The unique building, the machinery and thousands of small pieces of equipment were to be preserved. The building had to be carefully stabilized and the Cloth Mill had to be restored. Today the Cloth Mill turned Museum is providing an insight into the production of woolen cloth, into the different working processes and into the life of the workers. During guided tours through the mill, the old machinery from around 1900 is set in action. 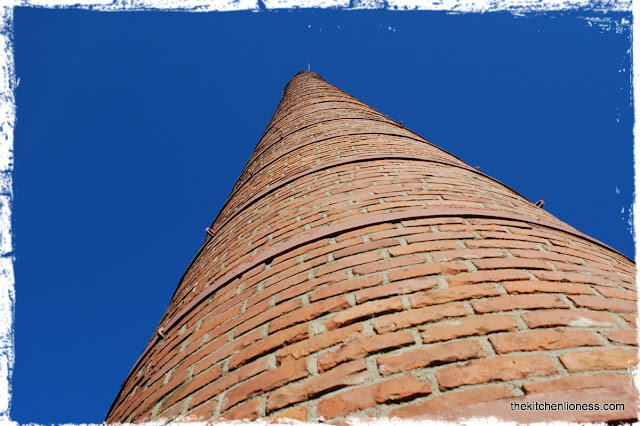 All of the equipment and machinery was restored into conditions that they were in at the time of the closure of the factory in 1961. Therefore the most important machines, the "heart" of the Cloth Mill, such as a "carding machine",a "spinning machine", a "threading machine", four "weaving looms" and a "steam engine" can all be set into motion during guided tours and you can admire the fact that they have been lovingly restored to make them work properly like they did until 1961.

Some machines that are not in action nowadays were also restored by carefully preserving all traces of usage  to provide an authentic insight into the life of a Cloth Mill. 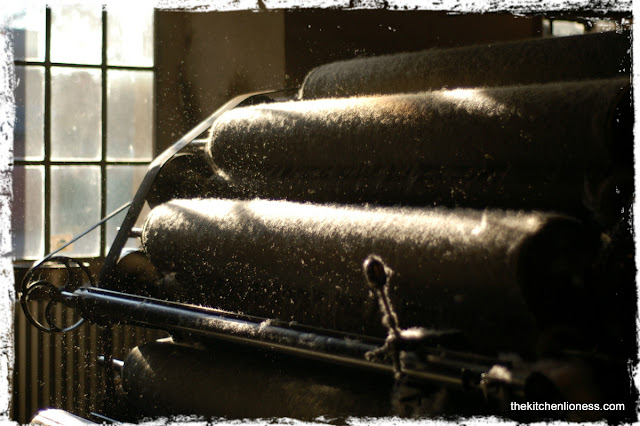 The acids that were necessary for mixing the different dyes were kept in these original glass bottles, some of them leaning up against the wall. 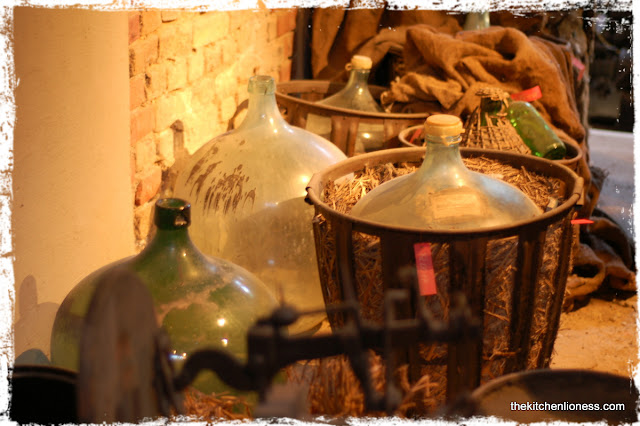 Restrooms for the workers (ladies and gents). 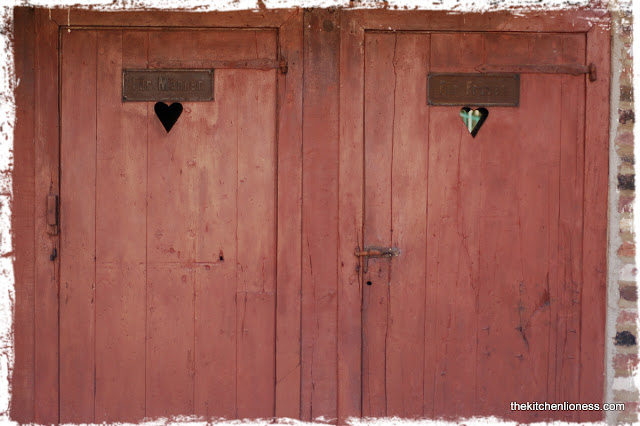 Time for a break. 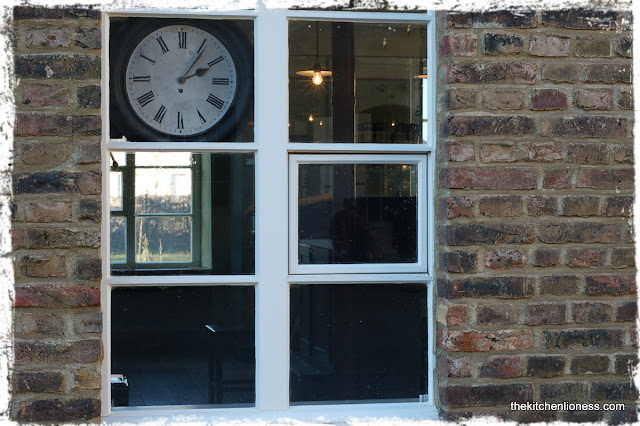 The following tag was attached to the acid bottles. It is a comment by one of the former worker of the Mill. It reads "Black is the simplest color to mix. But you have to be careful not to mistake one acid for another. Only if the acetic acid has boiled for a half  hour, are you supposed to add the formic acid. Three to four workers were in charge of adding the wool to the mixed dyes."

Tags with wonderful quotes from former workers can be found throughout the Mill. 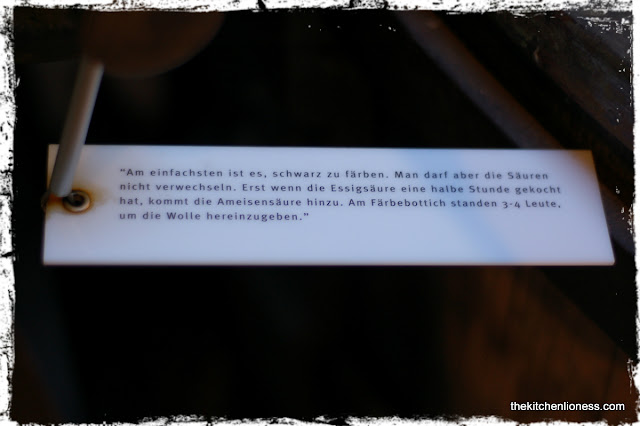 A belt that was repaired with some metal clips. 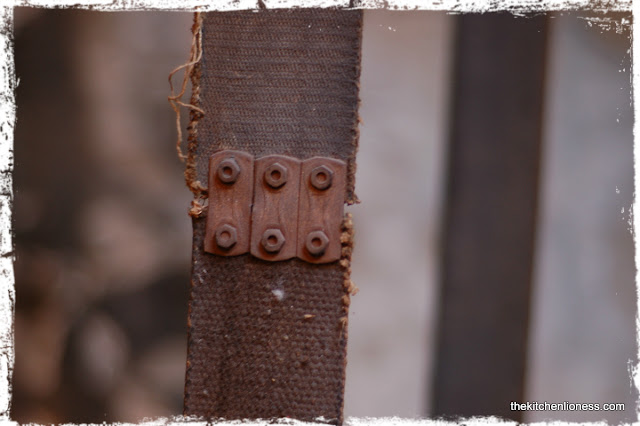 Wrenches and metal chains of different sizes that were left right in this spot. 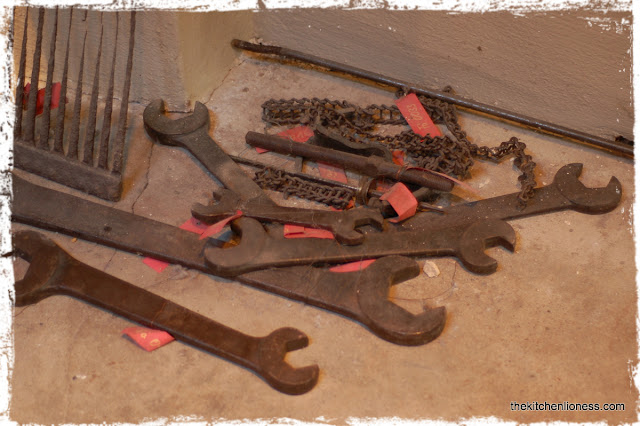 A scale with some orange-yellow wool thread (one of my personal favorite "still lives"). 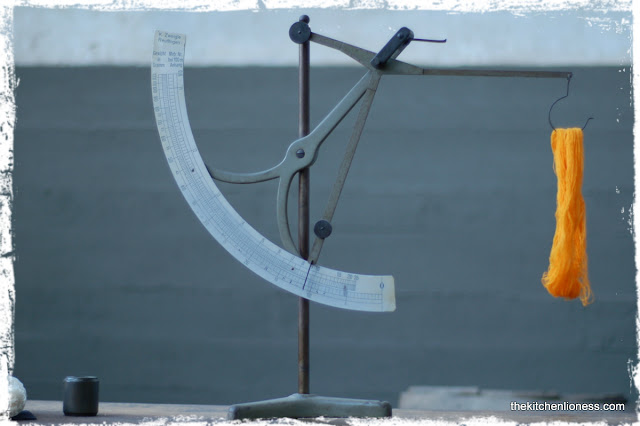 Some of the original machines. 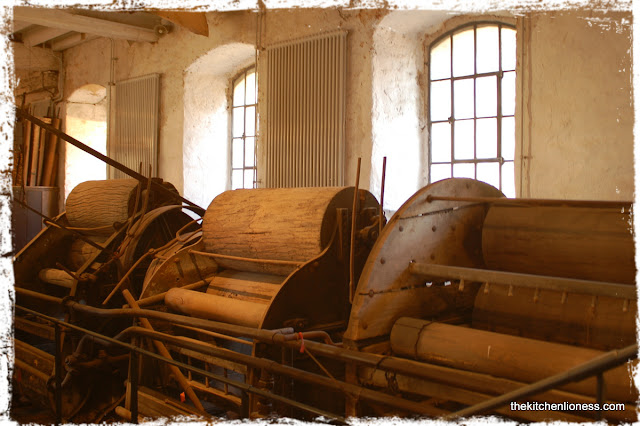 This is the so-called "secret" recipe for mixing one of the dyes. The guide told us that the "recipes" for the dyes were known only to the owner of the Mill and that he would always mix the dyes himself, except for this one time when he had to tell one of his trusted workers how to mix a dye. The worker marked it with white chalk on this wooden door. So much for a secret... 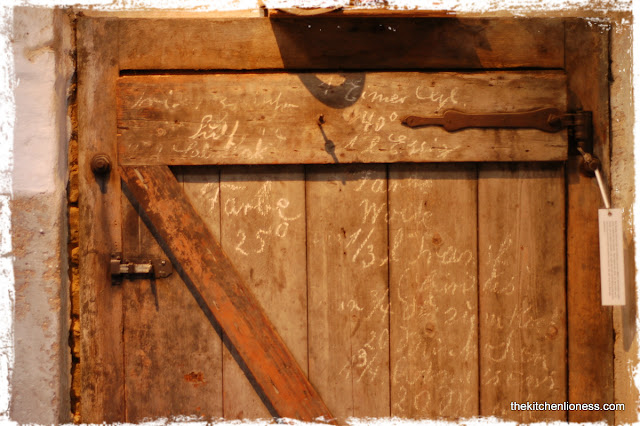 A window where one of the workers had his workspace and kept all his tools close at hand. 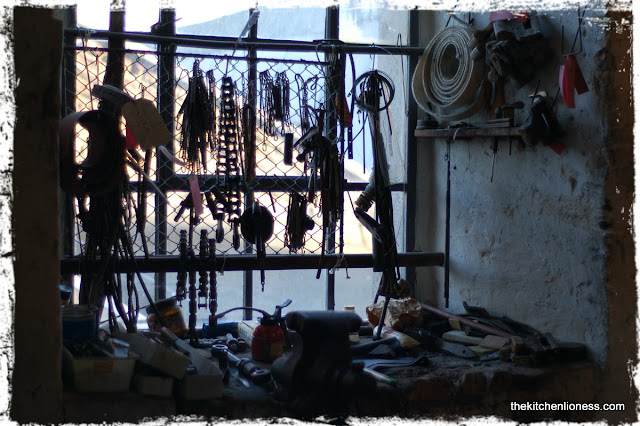 One of the bicycles with the original leather saddle used by the former owner to get around the factory premises. 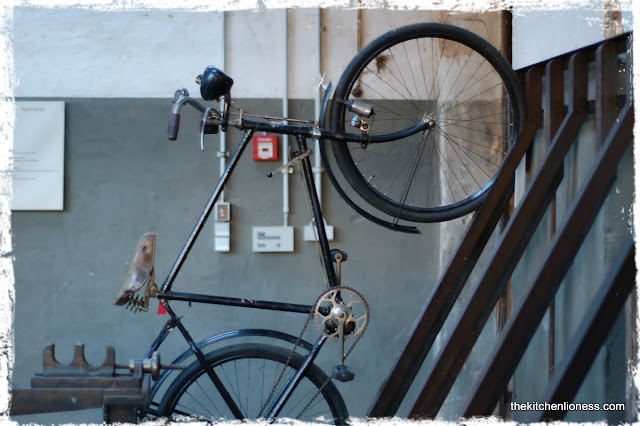 An assortment of spindles all lined-up and with ready to use yarn. 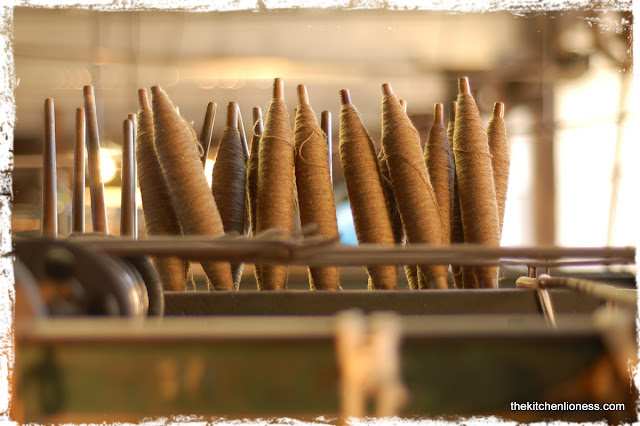 More spindles, this time piled up. 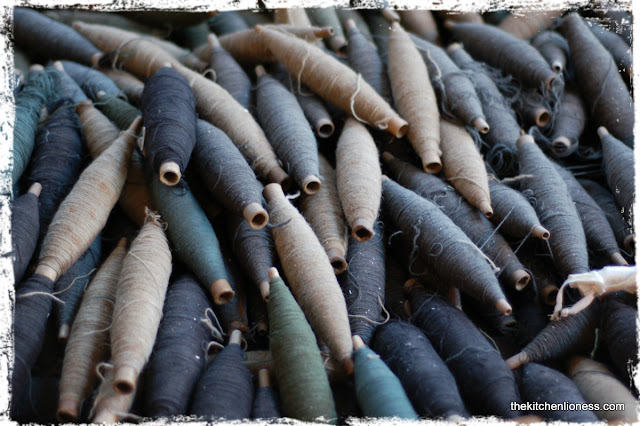 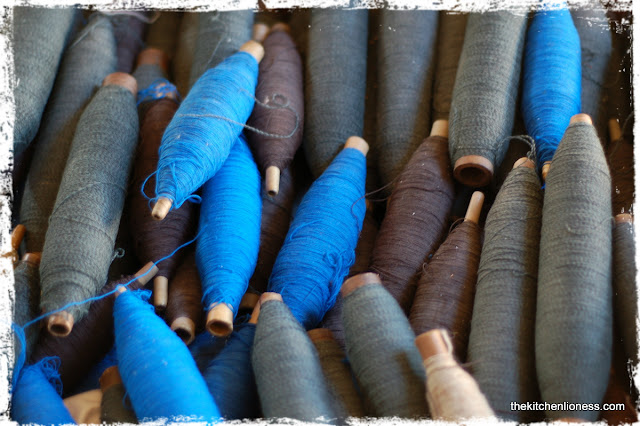 One of the most difficult tasks in a Cloth Mill was getting rid of or preventing the infestation of moths. These bags of moth powder were left in this wooden tool box next to some solid looking nuts and bolts. 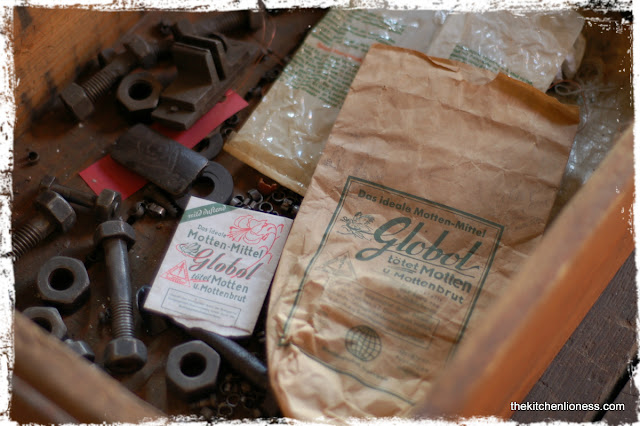 And a natural way of fighting those pesky moths.There were little white cotton bags filled with dried lavender  in every room. Definitely another one of my personal favorite "still lives". 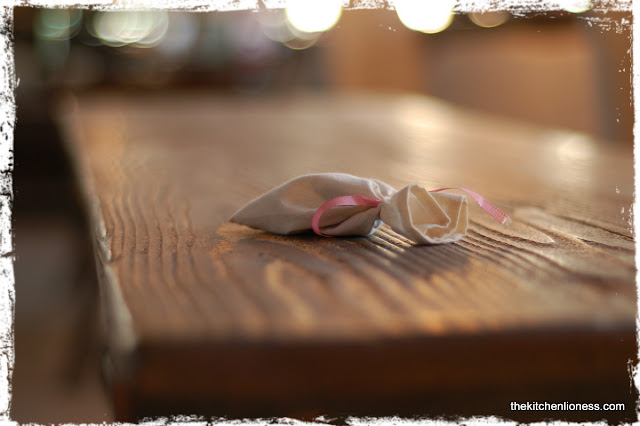 Wool threads leading from the spindles to the loom. 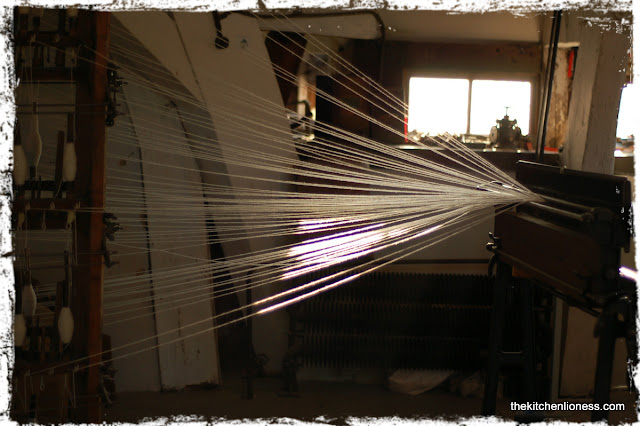 The finished wool cloth, dyed in different colors, rolled up and lined up for a final inspection. 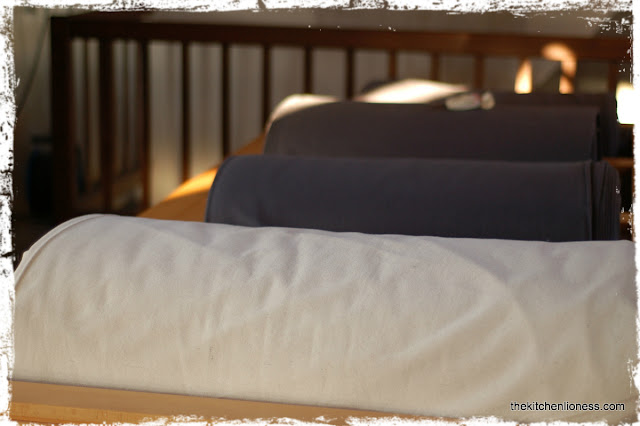 Handwritten notes in the office of the former owner. 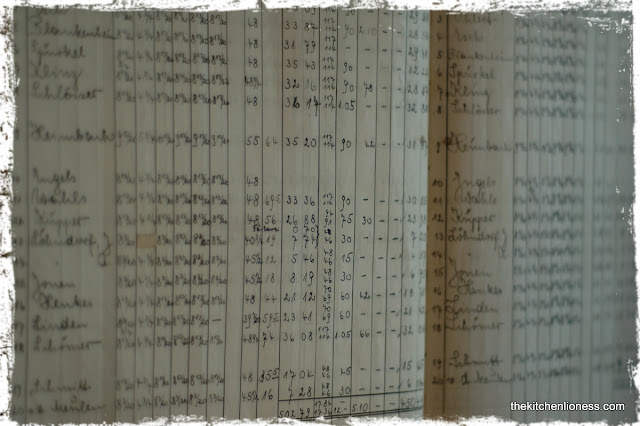 The final fabric was packed up and stored in the office of the owner - no one else was to enter this storage room. 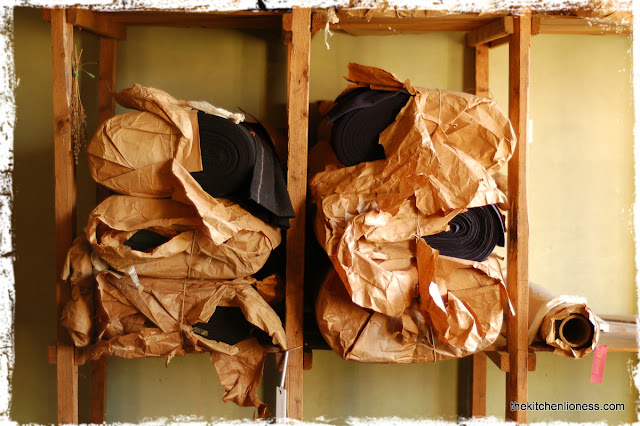 Some glass bottles with different dyes. 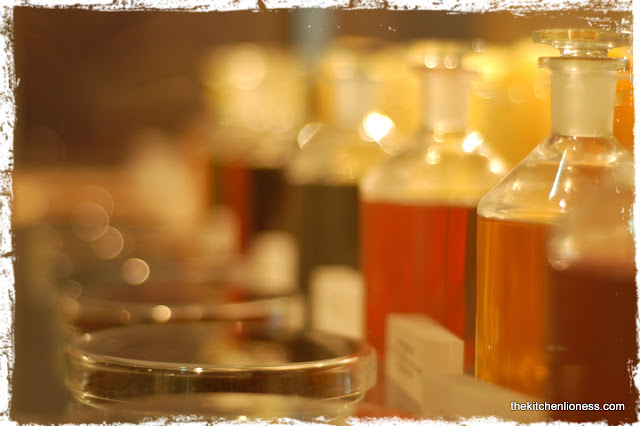 What a wonderful "Pfaff" sewing machine. 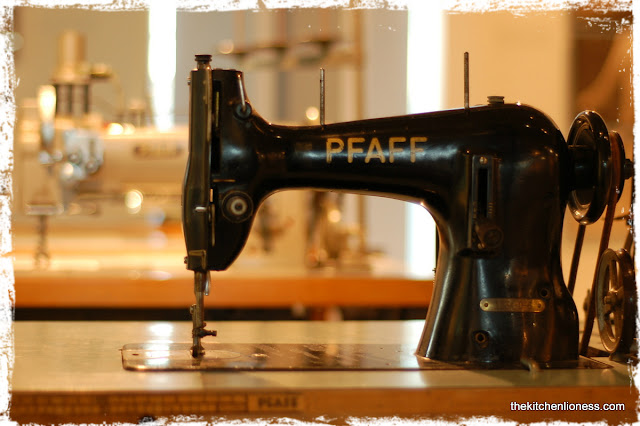 The brook that flows along the brick walls of the Cloth Mill. 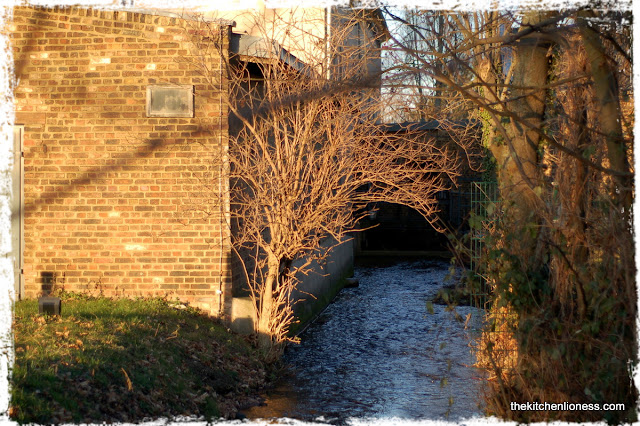 A sample of the different colored wool threads after they were dyed and aligned for weaving. 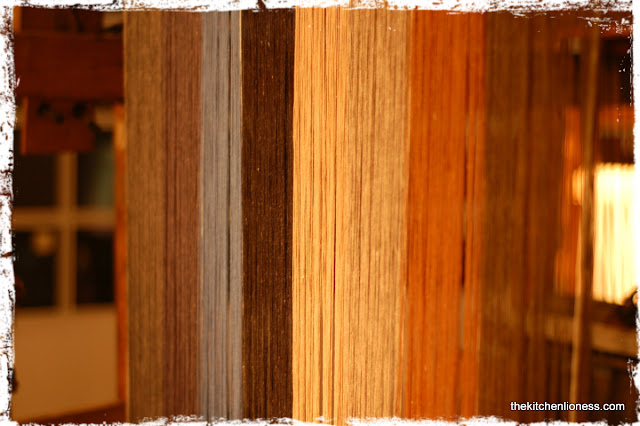