A one-day trip to the Netherlands is always a nice change of pace from the routine of our everyday life. For us, that often means a one and a half hours drive by car to the beautiful city of Maastricht (Mestreech).

Maastricht  is located in the Province of Limburg, of which it is the capital. It is situated close to the German and Belgian borders and is widely considered as the oldest city in the Netherlands. Its Latin name refers to the fact that the Romans built a bridge over the Maas river in the first century AD to the settlement they called “Mosae Trajectum”.

Today, the city of Maastricht is located on both sides of the Maas river and is widely known for its picturesque squares, romantic streets and historical buildings. It is a city of linguistic diversity and the official language of instruction at Maastricht University is mostly English, therefore attracting many international students from around the world. The city is very popular with tourists for shopping as well as for recreation and one should not forget that it is known, by way of the Maastricht Treaty, as the birthplace of the European Union, European citizenship, and the single European currency, the Euro.

One of the many places that is a “must see” when touring Maastricht is the “Boekhandel Selexyz Dominicanen” (now known as "Boekhandel Polare Maastricht") a Dominican church that dates back to the 13th century. 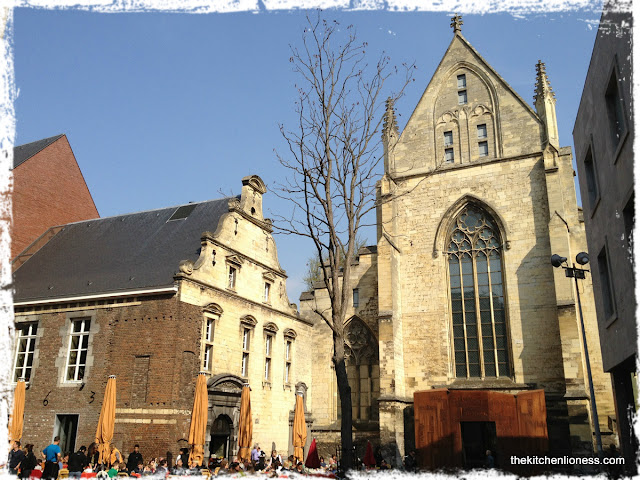 The building was a Dominican church until the city of Maastricht was invaded by Napoleon in 1794 and the Dominicans were forced to leave the country. Since that time, the building was being used for various purposes such as a warehouse, as an archive and, in the end, as a giant parking lot for bicycles. 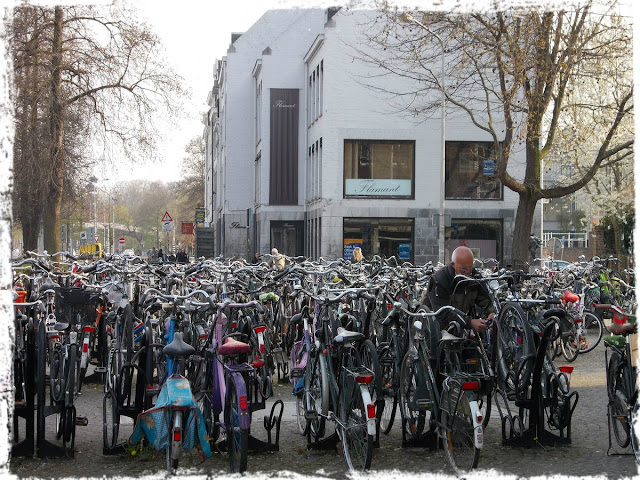 But thanks to extensive renovations led by the Dutch architects Merkx & Girod (www.merkx-girod.nl), the former church has been turned into “what could possibly be the most beautiful bookshop of all times” (The Guardian, January 11, 2008). 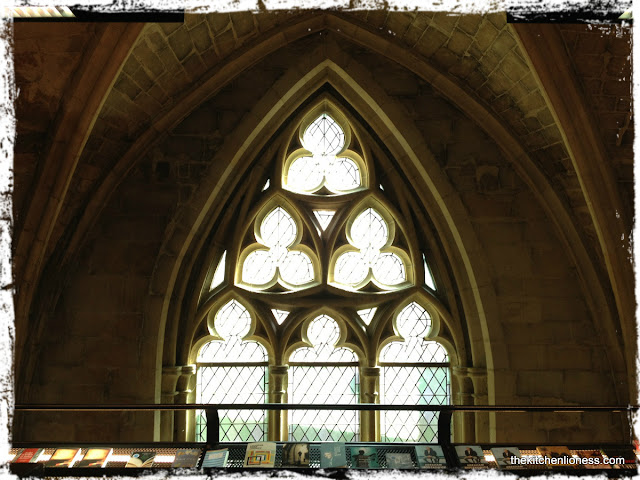 The “Boekhandel Selexyz Dominicanen” opened its doors in December 2007. After the renovations, it retains its character and its charm as an old church, just take a look at the beautifully renovated 14th century ceiling fresco. 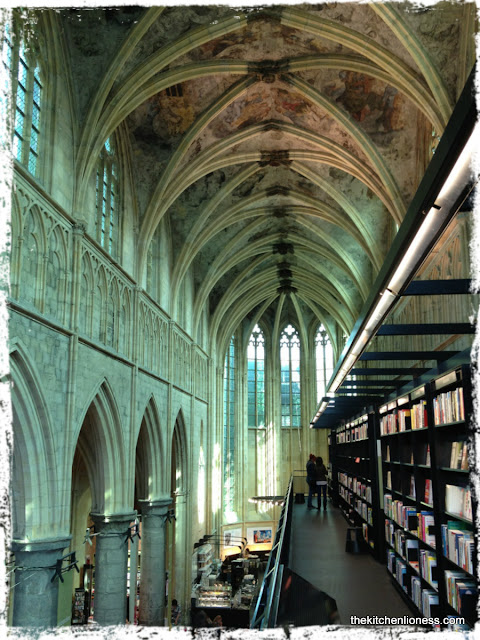 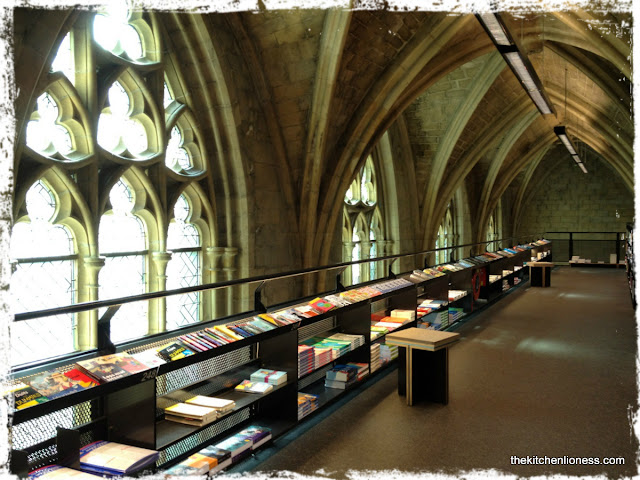 At the back of the church, customers can sit down for a cup of coffee at the “Coffeelovers” coffee bar (www.coffeelovers.nl). “Coffeelovers” is a small chain of coffee bars serving high quality coffees but also teas from the Maastricht-based coffee roasting company “Maison Blanche Dael” (www.blanchedael.nl). This coffee roasting and tea packaging company was founded in 1878 and, to this day, is a purveyor to the Royal Dutch Household. While enjoying your fabulous coffee or tea, you can also munch on a variety of savory or sweet snacks. 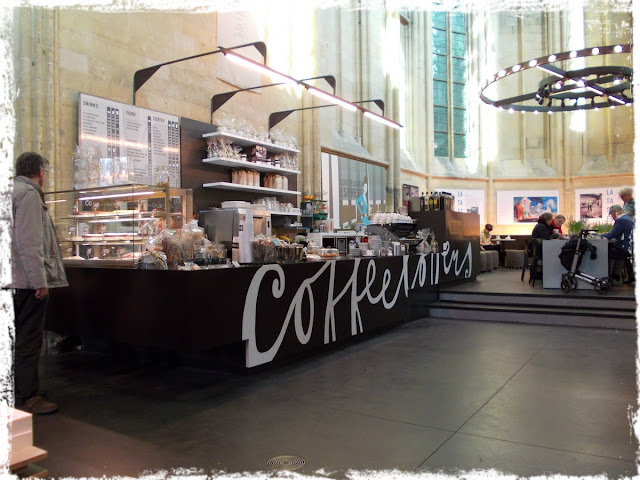 The coffee shop is located in the former sanctuary. And the bookstore also installed a cross-shaped reading table where customers can sit and flip through the magazines and newspapers kept in the slats of the table. 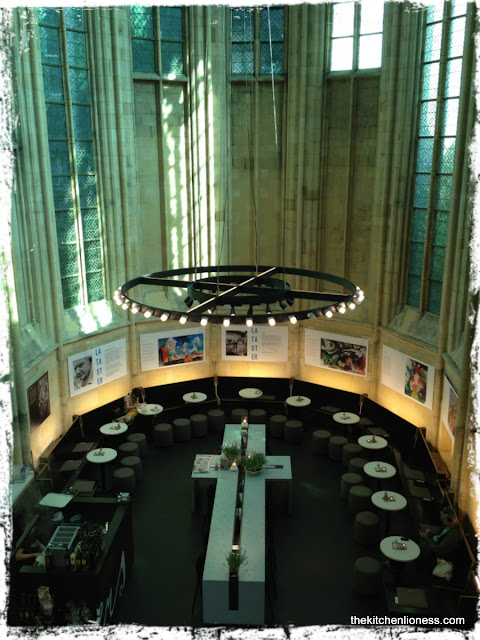 The "Boekhandel Selexyz Dominicanen" belonged to the popular Selexyz bookshop chain (now Polare) and carries a wide selection of newspapers, magazines and books (many of them in English) – as you can see from the cookbooks on display there, Jamie Oliver and Yotam Ottolenghi are also very popular with all those talented Dutch cooks and bakers. 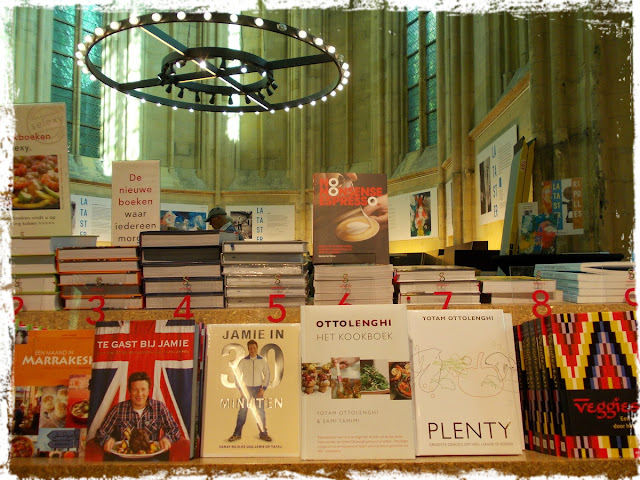 From the above photos, I hope you can see why this 800-year-old former Dominican church is truly a “bookshop made in heaven”. It was also featured on the cover of a book (“Kaufhaus der Worte: 222 Buchläden, die man kennen sollte” – “222 Bookshops that you should get to know”,  by Richard Deiss) and as part of of the following book “Die schönsten Buchhandlungen Europas” – “The most beautiful Bookshops in Europe”, by Rainer Moritz, Reto Guntli and Agi Simoes. Both books are available at www.amazon.com).