Today's recipe for the French Fridays with Dorie group is Olive Oil Ice Cream. At first, that might sound a little bit strange but then again, it does not, because olive oil has become a rather prominent ingredient in a lot of different dessert recipes. 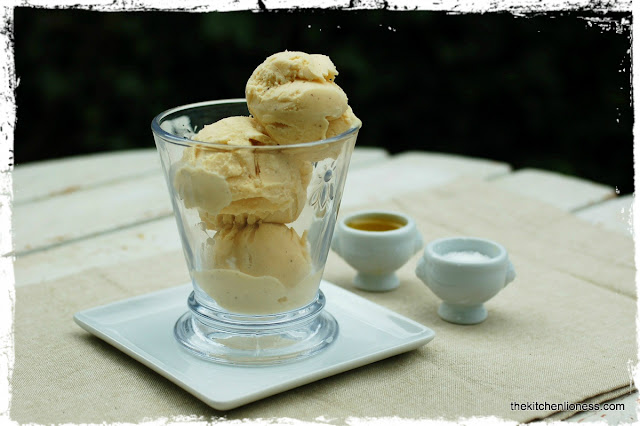 Once you have read through Dorie's recipe for the Olive Oil Ice Cream, you realize that it is a clear and easy recipe, much like preparing vanilla ice cream and since the ingredient list is rather short, the most important step is getting a good quality olive oil with a mild flavor, no peppery taste wanted in that ice cream. I went with my tried and true organic cold pressed olive oil, although I think I drove the clerk to the brink of exasperation because I would not stop bugging him about finding an olive oil that would be even better suited to ice cream making. 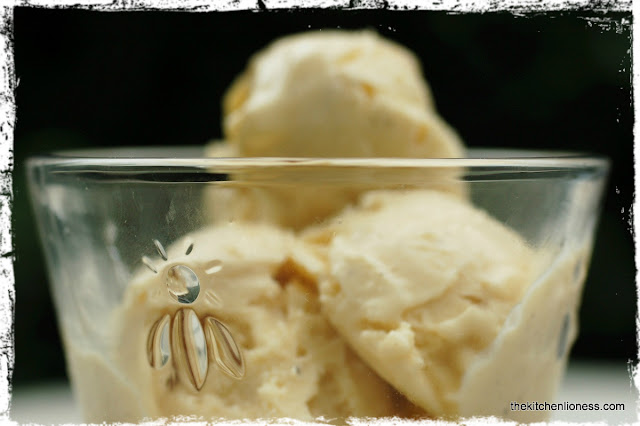 To make the ice cream, you simply prepare a basic custard with milk, cream, eggs, sugar and a pinch of fleur de sel and only than do you add the well chosen olive oil and the vanilla (instead of the vanilla extract, I used the seeds from a vanilla pod). Cool the custard, then transfer to the fridge, then to the ice cream maker, than finally in the freezer overnight.

Dorie suggests a whole number of things that you can serve with the ice cream. Apparently, trendy chefs in Paris serve the olive oil ice cream with a drizzle of olive oil and a few flakes of fleur de sel. When I read this, I decided to serve a bit of olive oil and fleur de sel on the side - for those adventurous enough to try this combo. 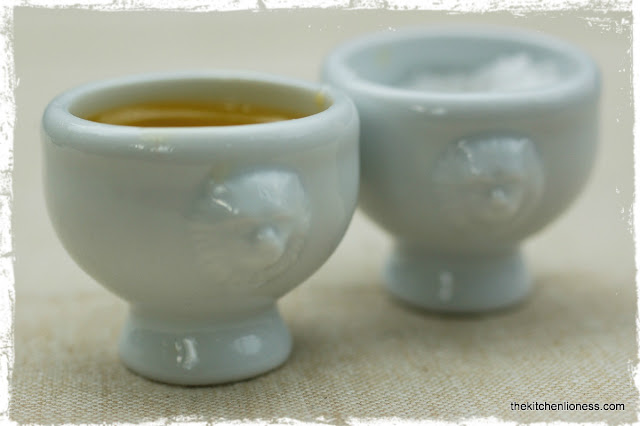 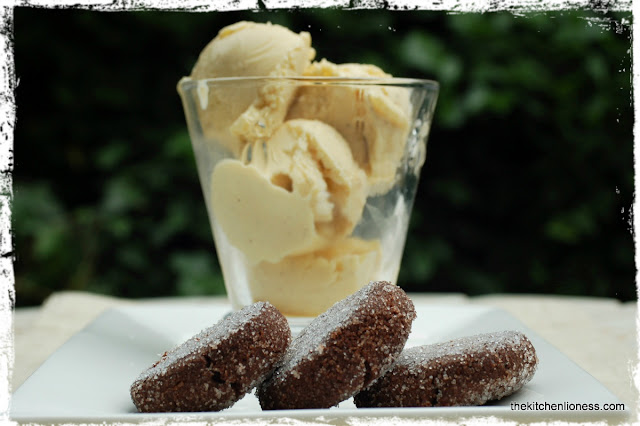 
Preparation
1. Melt the chocolate in the microwave in 30 second intervals.  Set aside and let cool until lukewarm.
2. Sift together the flour, sugar, cocoa powder, baking soda, salt and cinnamon.
3. In a small bowl mix together the olive oil, vanilla and the Cognac.
4.  Add this to the dry mixture.  Add the melted chocolate and stir until the mixture comes together into a uniform mass.
5. Using your hands, roll the dough into ball about 3/4 to 1 inch in diameter. Roll and cover completely in sugar, and place them 2 inches apart on the parchment lined baking sheets.
6. Use your palm to very gently flatten the cookies a bit. Bake the cookies about 12 minutes. Transfer the cookies to a wire rack and let cool completely. 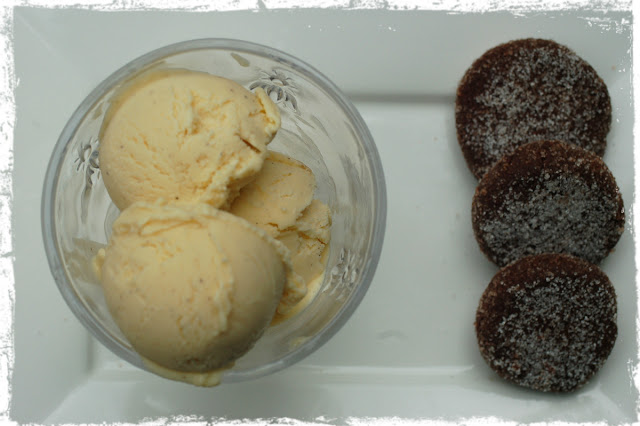 The Olive Oil Ice Cream was a huge success at our house. The kids were curious to get a taste of the ice cream and they loved the way it tasted but no additional olive oil or fleur de sel as a topping for them, just the ice cream and the cookies. The ice cream had a very pretty color (influenced, no doubt, by the kind of egg yolks and olive oil that you use) and it tasted wonderfully rich and creamy, with a hint of vanilla (may be a bit more so because I used vanilla seeds)  a bit of fruity taste from the olive oil, a little bit of saltiness.

I believe that I have found a new favorite ice cream. The only thing that I liked even more than the taste, is the fact of being able to replace some of the cream with olive oil – I just love that idea. With only a few ingredients, the ice cream will taste its best when it is made with a really good oil, one that you really like. And the cookies harmonized very well with the ice cream, they are not overly sweet with a crumbly texture, a bit like shortbread with the added crunch from the sanding sugar. A nice addition to the ice cream and I love the fact that I get to use the same wonderful olive oil for both these treats.

To see how the other adventurous Doristas prepared the Olive Oil Ice Cream, please click here.