French Fridays with Dorie - Corn Pancakes: Why sometimes simple recipes need a bit of fancy treatment or why I do not want to bump into another Saint

Today´s recipe for the French Fridays with Dorie group are „Corn Pancakes“. I have prepared corn fritters before but these were my first Corn Pancakes. 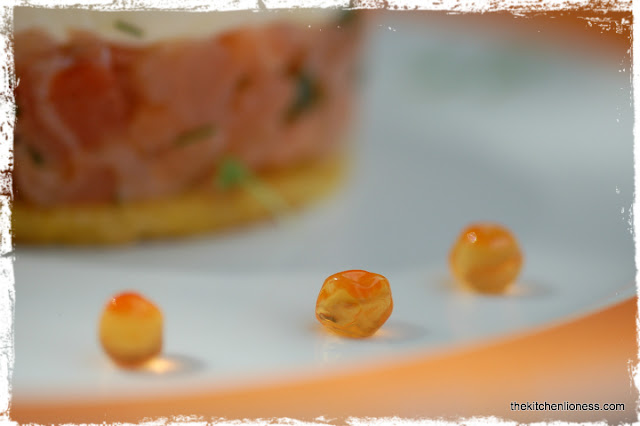 Dorie´s recipe is rather uncomplicated and the list of ingredients is short. The only ingredients required are corn kernels, eggs, flour and salt – could not be easier. My first thought was to prepare some nice chicken alongside the corn cakes but after having read through the complete recipe and Dorie´s “Bonne Idée”, I decided to go Jean-Georges Vongerichten´s route and serve them as hors d´oeuvres. 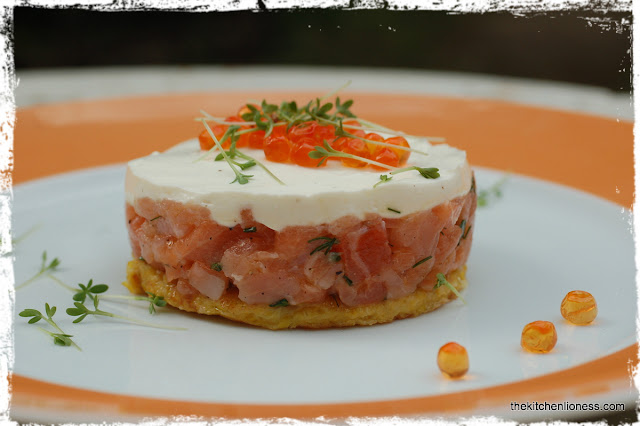 Dorie writes that Monsieur Vongerichten sometimes serves the pancakes with smoked salmon, salmon roe, and/or crème fraîche – sounded good to me and besides I happen to adore Jean-Georges Vongerichten recipes. But I felt that I needed something even a bit more out of the ordinary and decided to prepare the corn cakes with a “tartare de saumon topped with lime crème fraîche and salmon roe”.

Why so fancy – well, the last two weeks were not really the greatest weeks of all times and I thought we all needed a bit of a treat and I needed to spend some time in the kitchen (I was being extra careful, you will see later why) and then have a bit of a fun photo session. 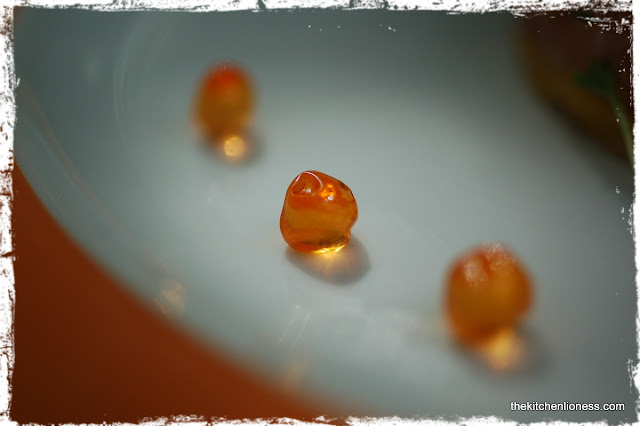 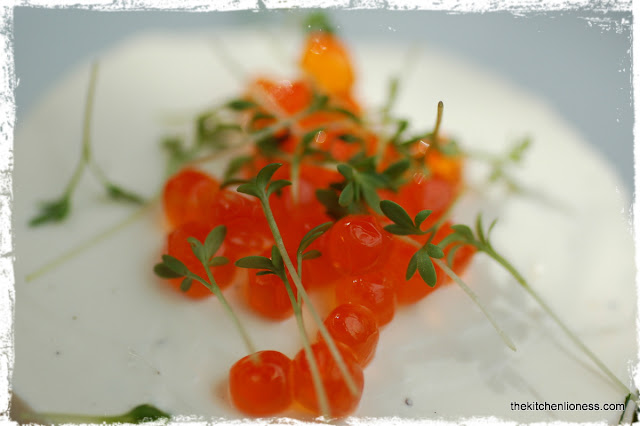 The rest of the ingredients for the tartare were also readily available and included lime, honey, chives, dill and cress. 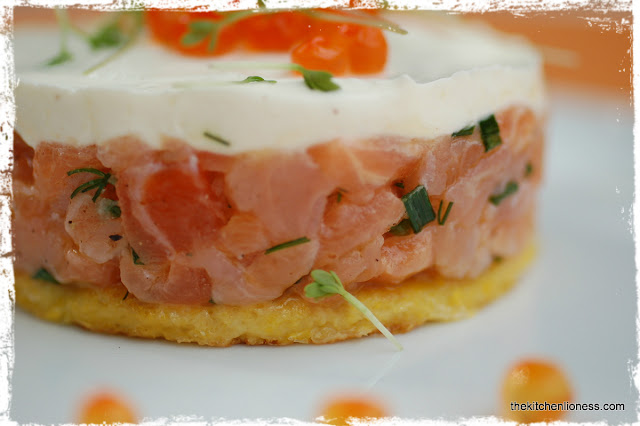 So I prepared the salmon tartare, the lime crème fraîche and put them in the fridge and it was time for the corn pancakes. They were quickly made and smelled delicious. And I believe that I have found a new family favorite there. After they had cooled, I cut them so they would be nice and round and fit into the metal rings that I planned to use for the presentation. Once all three components were nice and cool, it was time for the assembly and decoration. That part was just plain fun and simply felt good, looking at the finished plate left me with a sense of relief that things will be so much better very soon. 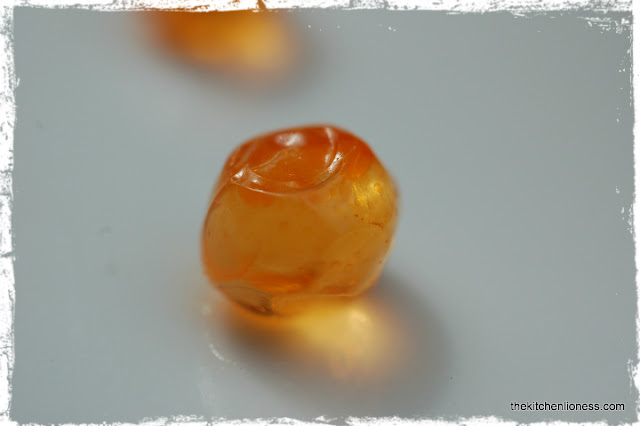 Back to the recipe for this weeks FFwD group, the corn pancakes were terrific on their own or topped with delicious tartare de salmon and lime crème fraîche. We all loved to eat them and I liked the simplicity of this great recipe – another keeper for us, maybe with different toppings as a side dish next time, but definitely a must repeat. 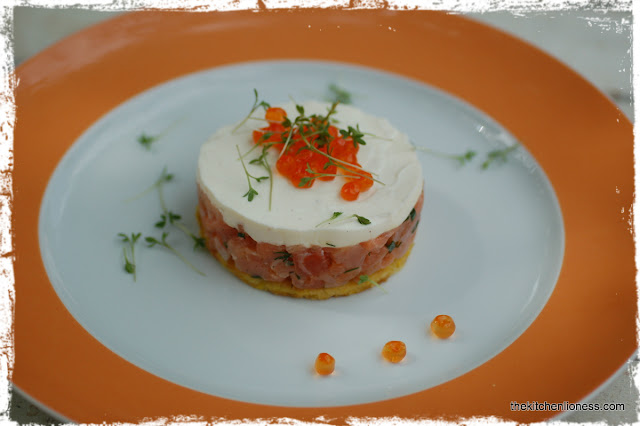 We spent quite a bit of time at the hospital lately, one of the kids is suffering from a rather persistent lung infection that just does not want to seem to go away, so no school (no vacation here yet), staying home, running back and forth to the hospital looking after the rest of the gang, you get the idea, we all know those days and we know it will get better, eventually...But for some reason, I believe I had to top the whole stressful time a bit.

It started with the French Strawberry Cake (TwD) that I baked in the middle of the night, it turned out to be wonderful but I was so tired after I finished making the cake that I ran into a metal door frame and got the first black eye of my lifetime. A few days later when I tried to cut the nice green seaweed for David´s Seaweed Sablés (FFwD), I cut myself so bad, it would not stop bleeding for the longest time. I then continued to get bruises and burns every chance I could get and lastly, but certainly not leastly, I bumped into a Saint and hurt my arm so bad, it looks, lets just say, a bit colorful – a Saint, how can you bump into a Saint.

Well, the hospital is officially still run by an Order of Catholic Nuns, there are some Nuns working as nurses in the hospital. And there is a really nice chapel and then there are those Saints. Stone figures mounted on nice little stone pedestals along the walls of some of the corridors, nice looking but sometimes just “in the way”. The Saint that I bumped into is “Saint Martin”,  a Patron Saint for beggars, shepherds, merchants, wine makers, millers, innkeepers and many, many more. I usually really like Saint Martin and every year, primary school children honor his feast day with a lantern parade followed by sweet treats (our equivalent of  Halloween) but this time we had a rather painful meeting. So now my husband is lovingly hiding all kinds of dangerous items from me. Items, such as needles, that I could choose to have some more painful encounters with.

But not my kitchen knives, nobody is allowed to touch them, not even now. 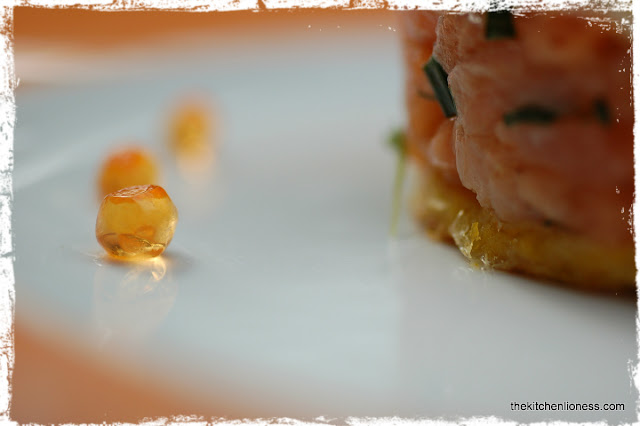 To see how the other Doristas prepared these wonderful corn pancakes, please make sure to click here. I have a feeling that there will be a lot of different variations on the main theme this week.